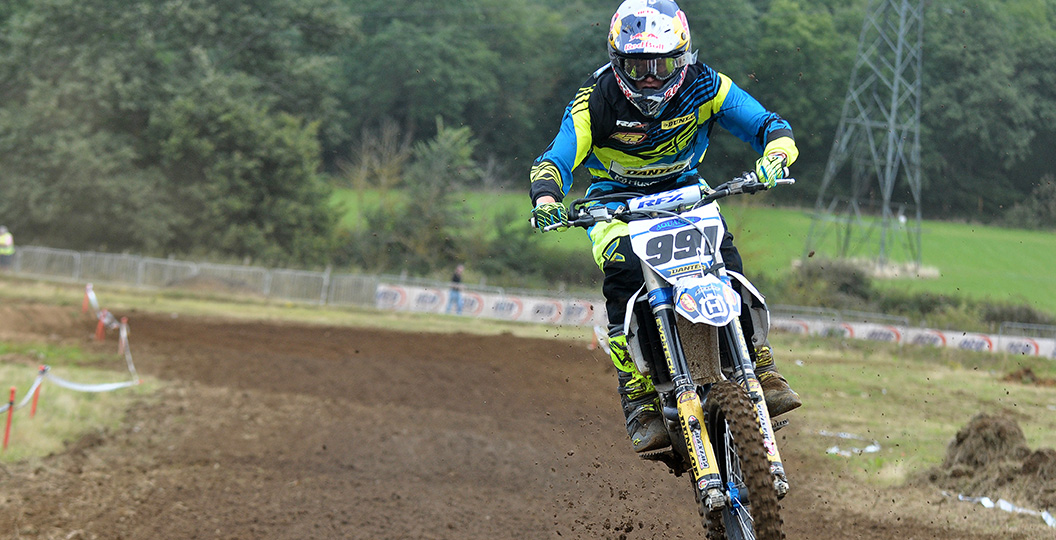 The idea of seeing a Husqvarna at the head of the pack would have been far-fetched two years ago. However, following a very successful term in the UK, fans have adapted to seeing the white bikes at the front, which is a testament to the programme that the manufacturer has put together.

Matt Hutchins and the squad formerly known as Evotech Stevens KTM were handed the reigns to the Husqvarna set-up at the beginning of this season, as a reward for their hard work and solid results over the last couple of years. Prior to the season we really had nothing to base any predictions off of, but the Dantec Husqvarna UK team came out with a bang and both of their riders, Nathan Watson and Steven Lenoir, have featured at the front of the pack in their respective classes since then.

The team has not just impressed on the track though, as their set-up in the paddock is undoubtedly the most spectacular of all the teams that stick to the UK. This is why it is such a shame to see them shut up shop, as the paddock at events such as the MX Nationals will look very different without them. Well, actually, it seems the pits will look very different anyway next year, but more on that soon. Of course the team closing their doors also means there are two less rides available. It really is disappointing to see them go.

However, another team has picked up the Husqvarna UK baton; Phoenix Tools will be the official team from 2015 onwards. It is not too surprising that they have got the gig; both Alex Snow and Luke Hawkins have been solid this year. Alex especially has impressed at times, as he has inched closer to a podium in the premier Maxxis British Championship. On the other hand, it is surprising to see that the squad has put together a formidable six-man line-up for 2015, with three MX1 and MX2 riders respectively.

Both Hawkins and Snow will return, unsurprisingly, with Scott Elderfield joining them in MX1. Michael Eccles, Luke Norris and Alfie Smith will represent the brand in MX2. Husqvarna had two title contenders this year; in comparison they will have some solid, consistent finishers in 2015. Although wins may be a bit of a stretch, Husqvarna will once again have a larger presence than some other manufacturers, which is obviously great for the sport. It’s good to see them pushing forward.

For riders like Luke Norris and Michael Eccles that are always improving, the opportunity to ride for Phoenix Tools Husqvarna signifies that hard work does pay off, as Eccles especially has done ‘the most with the least’ this season whilst Norris continues to post solid results in similar circumstances. One of the most interesting stories to follow in 2015 will be how these two riders perform with this level of support behind them, something they haven’t really experienced at a domestic level. Of course, Hawkins is right on the cusp and could potentially breakthrough at any moment too, so there is going to be some promising talent under that tent.

Barry Moore, the team manager and man that has put a lot into motocross over the years, has seemingly elected to shift some of his focus to the up and coming talent. He echoed these thoughts in the official announcement; “We always wanted to focus on young UK riders and use our skills and expertise to help them up to the mark and with the racers we have signed this year, we are really excited about the prospects.”

Although the team has invested a lot into young riders, having Alex Snow, who is considered a veteran at the old age of twenty-six, beneath the tent will ensure there is a good balance there. The atmosphere beneath the Phoenix Tools tent is one that some riders thrive in, like Alex, which will surely help his younger teammates that will come aboard in 2015; “I feel comfortable and happy in the situation I’m in. It’s probably the best team atmosphere I have been in, despite the fact that up until now it has been one of the smaller teams that I have ridden for” said Alex on the Phoenix Tools squad.

The fact that the team has put this much effort into raising their profile for 2015 indicates that they will be around for a while. This new deal may even elevate their reputation so that they are held in the same regard as the top teams in the Maxxis British Championship paddock. Dantec Husqvarna UK certainly stepped it up with the Husqvarna support behind them, as mentioned previously.

The Phoenix Tools set-up will be an interesting one to keep an eye on next year, because of the variety of characters that they have beneath that tent. There riders won’t be alone on the white bikes though, as some more surprising names look set to end up on a Husqvarna.