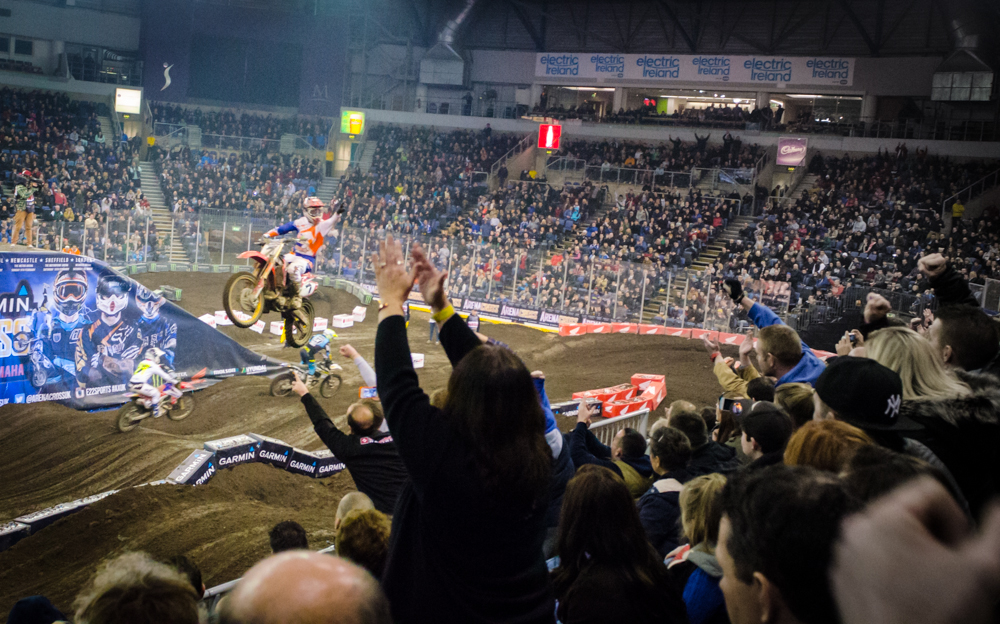 The first two rounds of the Garmin Arencross series are in the books. But were they a success? The answer is a resounding yes!

The racing was simply spectacular. Between big crashes, hard passes and intense battles you really didn’t know where to look.

The track conditions may not have been ideal for the riders but the soft surface made the track more technical and the chance of the making mistakes were much greater. The riders had to be on their A game all night as there was no place to relax. Passing opportunities were also better than last year but you had to be aggressive to do it. But isn’t that what Arenacross is all about?

One of the coolest moments of practice was when Kristian Whatley went round a rutted left hander, lent over, at close to full speed while casually pulling a tear-off with his left hand – awesome!

It was funny for everyone except Coulon who had been showing good speed all day.  The Frenchman also had one of the memorable moments on Saturday night, but this time it was a positive experience.

Coulon spectacularly scrubbed the triple from the inside (very few even jumped it from the inside), initially it seemed he had scrubbed it too much, but Coulon judged it perfectly, stayed low and passed Bradshaw in doing so. It was probably the best pass of the weekend!

Tyler Villopoto looked uncomfortable all weekend. The deep ruts were something that he was not accustomed too and hitting them with 100% aggression and a wide open throttle wasn’t helping his cause either. The top guys were flowing through the turns more but Villopoto, as he mentioned in our interview, is simply not used to the soft ruts, saying even California outdoor tracks don’t have ruts like that! Villopoto didn’t qualify for either main event in what was a nightmare debut.

Tyler has skills though and his jumping ability and bike control were evident. Once he gets on a harder based track and gets a start he should be OK.

Two riders who showed a lot of speed but maybe didn’t get the results to go with were Bryan MacKenzie and Neville Bradshaw. Crashes cost Mackenzie during the races and while he crashed out of both LCQs he did get a promoters choice and was allowed into Friday main where Pendrich Kawasaki rider showed his speed despite a second row start to get sixth.

Bradshaw could have been on the podium. He was flying on the Putoline Honda and looked very comfortable on the track. He also won a heat race but the mains just didn’t go his way and he was left battling through the field. Don’t be surprised if Bradshaw wins a main or two before the season is over.

Whatley was the fastest on both nights on the MBO Yamaha but he didn’t win either main. However he had the most flash on the track and the extensive whoop practice he had been doing certainly worked. Arm pump got to him in the first one and two crashes on Saturday night ruined his results.

It turned out to be the two guys with the most experience that won a main each. Both Fabien Izoird and Steven Clarke brought their best performances out when it really mattered. Both guys have substantial supercross experience both in Europe and America and that seemed to really help them come main event time.

Even with not a great start on Friday night Izoird rode smart and stayed out of the carnage to get third. He backed it up with a win after stalking Clarke all main event on Saturday before finally making his move.

Clarke was also impressive. In each main event he just exploded out of the start and rode the best he had ridden all day. He was one and a half laps away from winning both mains, and should have won the head to head on Saturday too.  Clarke looks comfortable on the bike and with his new team. Don’t be surprised if this form continues into the outdoors it’s been a while since Clarke has been fully prepared for a full season of UK motocross but this season he seems to be ready and focused on his goals.

The only real negative was the time it took for the crew to put the freestyle boards on the track. They even had to get the track maintenance machinery to flatten the corner to make sure the boards could site flat. This ate into the time of the show and created a bit too much downtime. As a consequence a few people left before the main event as the night was pretty long.

It would also be nice to see the heats and main be extended for a couple more laps. The racing is good – but each race just goes by so fast!

There was a boisterous sold out crowd on Saturday night and they got to see their hero Gordon Crockard win the LCQ. The crowd cheered his every lap in the lead and it showed just how cool arenacross can be with the crowd so involved. The atmosphere was superb.

Steven Clarke should hopefully experience that this weekend in Birmingham as he attempts to get a win in front of his home crowd and retake the points lead.

The other great thing about arenacross is that is brings the sport of motocross to the city. People who have never seen the sport before get a chance to see it close up in a clean and comfortable environment.

The teams and riders have a brilliant opportunity to gain extra exposure and get some racing in during the winter months to maintain almost year round coverage in the media. The mainstream media promotion is greater than any outdoor race too.

If Belfast is anything to go by, arenacross works and it is a great addition to the UK calendar, especially during the depressing winter period!