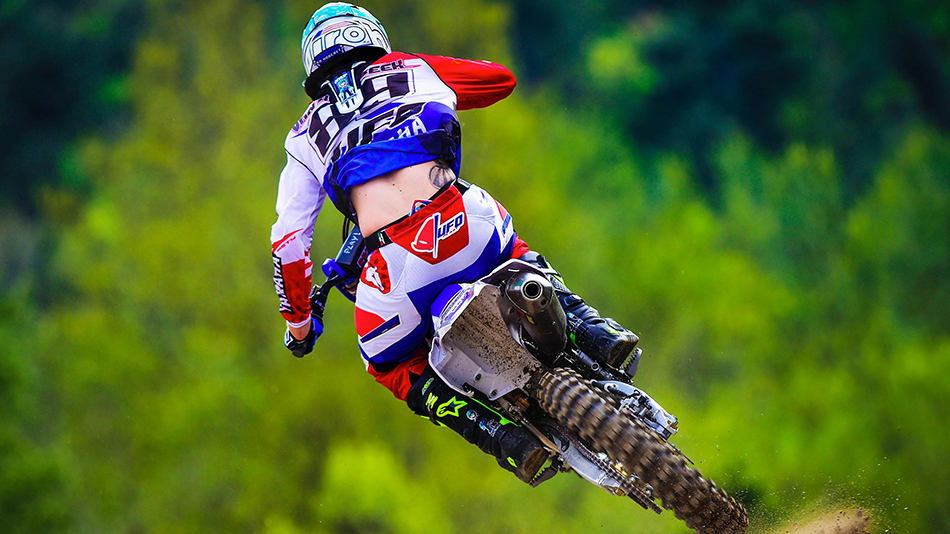 Three out of four for Yamaha Factory Racing’s Jeremy Van Horebeek as the Belgian again coated his works YZ450FM with podium champagne in the FIM Motocross World Championship. The 2013 Motocross of Nations team winner ran to second position overall at a busy Arco di Trento circuit in northern Italy today for the Grand Prix of Trentino and the fourth round of eighteen in the MXGP fixture list.

As with Grands Prix in Qatar, Thailand and Brazil, Van Horebeek was one of the leading protagonists in the premier class and with third and second positions today in front of a 25,000 crowd at the first European stop on the ’14 calendar, JVH is third and now just 21 points from the top of the MXGP standings.

Arco presented the most arduous racing challenge of the season so far. The short and winding hard-pack layout was littered with bumps, ripples and unsettling lumps. Riders were constantly searching for traction and any small mistake cost valuable ground across a terrain that was tricky for passing and shrinking time differences to rivals.

Van Horebeek was fast and regular with his lap-times and might have been in contention for his first MXGP victory were it not for several errors. He briefly crashed out of third place in the first moto and had to regain two positions to again enter the top three. In sunny conditions later in the afternoon he was part of an exciting four rider scrap for the lead. There were heart-stopping moments as he stalled the bike at one point and also survived a scare with a fallen Evgeny Bobryshev (he actually struck the Russian on the back cresting a jump). Van Horebeek defied the adversity to keep strong and was less than a second away from moto winner Clement Desalle at the finish line.

Elsewhere in MXGP, David Philippaerts was sixteenth overall. The owner/racer from the DP19 Yamaha Racing squad suffered from a mistake with his tyre choice in the second moto and a crash meant he had to work hard to recover points at his home event. The former world champion went 11-18 on the day. Just behind the Italian in the general MXGP standings was Bike it Yamaha Cosworth’s Rui Gonçalves. The Portuguese was one of the many who suffered from finding an effective rhythm on the slippery dirt and his pace was not sufficient to be able to break into the top twelve. Rui is still recovering from a short pre-season of preparation but has shown encouraging signs of being able to increase his pace and presence over the past two events.

The Grand Prix of Bulgaria at the staple venue of Sevlievo will follow hard upon the Italian fare. Round five takes place on Easter weekend as the Yamaha teams travel east during the coming week.

Jeremy van Horebeek: “I am happy to be second but I made too many mistakes today. I crashed in the first moto and lost time. In the second moto I had a bad start and had to come back through the pack. At the end of the race I was almost on Clement’s rear wheel and if it had not been for those mistakes then maybe I could have gone for it [the win]. Anyway, I’m pleased to be back on the podium and the consistency shows that Thailand was not a lucky shot. It feels good to be making the same results in MXGP like I did in MX2. I know I am really fit and I gave my all today. I hope to continue like this and soon win a GP because we are getting close now.”

David Philippaerts: “It was a hard day because the track was so difficult and with so little grip. In the first moto I was riding OK but it was hard to pass. In the second moto I changed the tyre for hard-pack but it did not really work for the start. I lost traction in one corner and crashed. Now we have to focus for Bulgaria and the coming races. I’m disappointed I couldn’t do better at my home grand prix. I liked the track but not the ground. We launched the team here and I’m really happy with the set-up and the structure. I have to reach the same standard myself now!”

Rui Goncalves: “I thought I might struggle at this track and disappointingly it turned out this way. We tried changing a few settings to find grip and more speed but I couldn’t get the feeling I needed to get comfortable. We’ll keep working for better next weekend.”