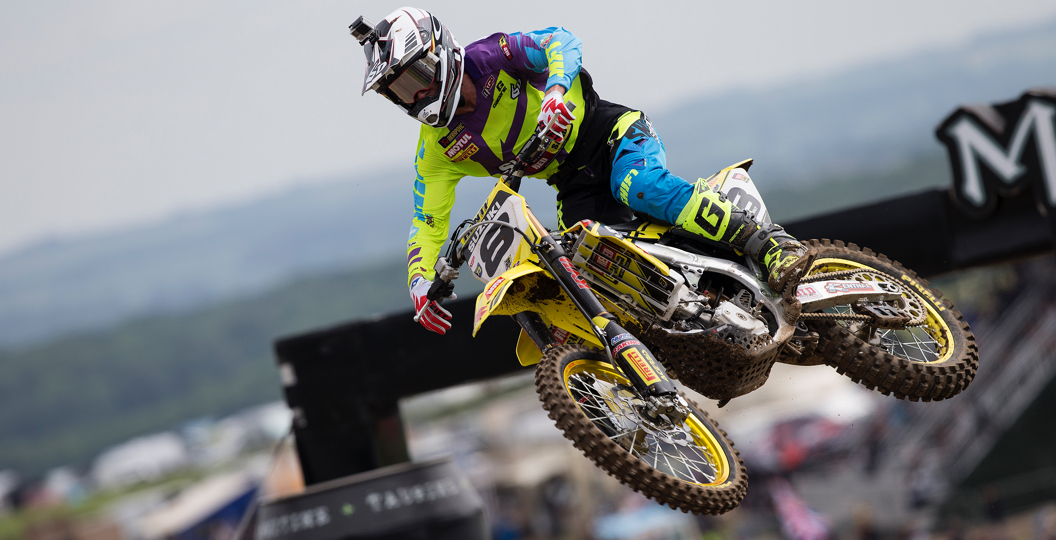 The Grand Prix of Great Britain was staged at the impressive Matterley Basin circuit near Winchester for the sixth year in a row, and at the eleventh round of eighteen in the 2016 FIM Motocross World Championship Team Suzuki World MXGP’s Ben Townley rode to a second moto position of twelfth on his factory RM-Z450.

Dry conditions greeted race day in the UK and with an appreciative 37,000 crowd glad that the weather forecast for the weekend of thundery showers did not come to pass. By the afternoon some typical English ‘drizzle’ made sure the second MXGP moto had a damp sheen, but the event was lucky to escape the worst of the climate. The quick and flowing course featured some spectacular jumps and was again acclaimed by most of the paddock as one of the best racing tracks on the calendar.

On Saturday Townley rode to ninth position in the qualification heat and was part of a multi-rider scrap going for the top five. Adjusting his suspension set-up on Sunday morning the New Zealander took his place in the gate hopeful of a top-ten finish.

The opening thirty-minute and two lap chase saw ‘#8’ luckless on the first lap. Townley fell and lost a lot of time to restart and re-join the fray. With an empty track ahead he tried to catch the stragglers of the MXGP pack, but went down again and was too far adrift so elected to gather energy and resources for the second moto. He made a better second start and was vying for seventh place until a slip on the penultimate lap proved costly.

Townley picked-up nine points for his disrupted world championship tally and with a total of one hundred and twenty-eight now sits fifteenth in the standings.

Kevin Strijbos was still not fit to compete after suffering a fracture in his left wrist at the Grand Prix of Spain. The Belgian will miss the following round of the series to focus on a return for the thirteenth fixture in the Czech Republic. MXGP continues now onto the shallow sand of Mantova with the Grand Prix of Lombardia next weekend.

Ben Townley: “Tough weekend, but it doesn’t sound like much different to what I have been saying all year. I put it down twice early in the first one so I decided to save my energy for the second. I wanted a decent and consistent moto but fell with a lap to go. It’s been a hard old season. I expected a much better weekend. We just need to keep working. We made some positive changes overnight. The team had some ideas and we made a fork and a shock change to make the bike softer and that made it turn better and gain more traction.”