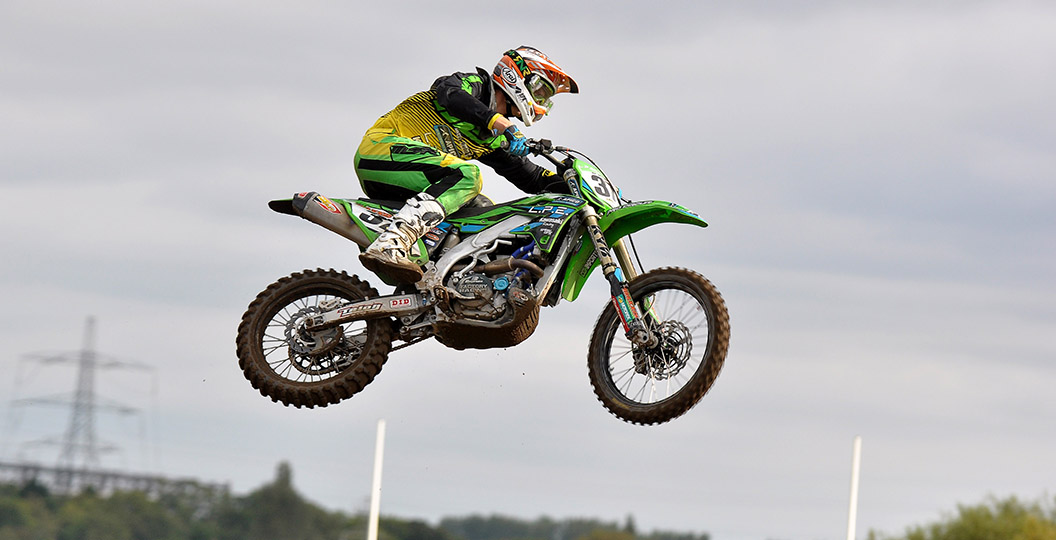 For the penultimate round of the MX Nationals championship the Apico LPE Kawasaki team made the trip to Preston Docks. Unfortunately due to a problem with medical cover the only on track action taking place on the Saturday was to be Practice and Qualifying.

With the Preston Docks circuit being a sand track, Gert Krestinov quickly settled into a good rhythm and posted a number of fast lap times and end the Saturday second fastest behind Greame Irwin.

Sunday saw the two Championship races take place and in the opening race Gert suffered a bad start and quickly worked his way into the top 10 and continued to push forward toward the top 5. Unfortunately soon after moving into 5th place, Gert suffered a mechanical problem that would remove any chance of a podium finish and saw Gert record 18th place.

The second race of the day once again saw Gert suffer a poor start and have to work his way through the pack. Krestinov soon worked his way into the top 5 and was pushing hard as he continued to pass riders and worked his way up to second place, recording the fastest lap of the race in the process.
Gert’s unfortunate bike problem in the opening race meant he would only finish 8thoverall on the day and remain 5th in the Championship standings.

Gert Krestinov: This weekend has been tough as we didn’t have much time on trackon Saturday and then I suffered a DNF in the first race while riding well. In the second race I rode well and got the fastest lap and finished second on a fun track.

Steve James: This weekend has been a bit of an odd event with the medical cover problems on Saturday limiting track action it made it a long drawn out day, but these things can happen and it was unfortunate for everyone involved. Gert qualified well in second and we were happy with that and looking forward to the races. In The first race on Sunday Gert had a bad start and then as he was pushing towards the front he had a problem with the bike, we are not sure at the moment what it is until we get back to the workshop! A DNF is pretty hard to take but it is the first mechanical DNF we have had all year so even though it hurts you’ve just got to take it on the chin sometimes!  Then in the second race he had another bad start but pushed hard to finish second and take 8th overall with only one result, with only having 2 races instead of 3 this weekend the DNF was an even bigger blow to us points wise and we are still 5th in the championship with one round to go.