With the first two rounds of the 2014 Garmin Arenacross Tour across the Irish Sea at the Odyssey Arena in Belfast, Oakleaf Kawasaki had hoped to make a great impression with indoor racing aces Jack Brunell and Tyler Villopoto, but it was not to be.

Both riders had a rough start on Friday morning during the qualifying sessions; although both riders started well, with Tyler with the holeshot and Jack in fourth, crashes were to be a burden of their weekend, causing them poor starting positions in ninth and eighth respectively. The evening heats also did not go as planned with both not finishing the third heat. Although Villopoto returned for the LCQ, he simply was not able to make much progress to qualify for the main event.

The next day’s racing constituted the second round of the tour. Much to Brunell’s disappointment, an injury sustained the weekend before in Dortmund was aggravated during the morning’s qualifying session and he made the decision to sit out the round. Villopoto on the other hand had a tough time throughout the evening. Again he was not able to make much progress throughout the races and ending outside the qualifying positions for the main event. The end result was a disappointing LCQ and having to watch the final event from the sidelines.

“From start to finish, this weekend was just a massive disappointment. No matter what we tried, Arenacross-wise, it just wasn’t happening. As far as Arenacross goes the track was something a long way from expectations. Saturday’s event just didn’t happen at all. We have Arenacross riders, but they are just not fitting into the conditions, but I need to get things back on track. Hopefully that’s our bad luck out the way, and we look forward to the LG Arena in Birmingham, where the track conditions will hopefully be different. We’re just a bit baffled at the moment, the bikes are good, the riders are in good shape, except for Jack who is suffering from an injury sustained at Dortmund. Where we are at the moment is just a bit of a shock to the system. I’ve got to find an infill 450 rider for this weekend. The pressure’s on!”

“In the winter I raced abroad to get ready for the Arenacross, and the best way obviously is to race, and last weekend in the last race in Dortmund I fractured a bone in my foot. I thought obviously that I could ride, I’ve been on ice for much of the week, came to Belfast and felt good, I could put a bit of weight on it, but not run or bounce, and as soon as I started riding, I felt it straight away. If the track had been harder it would’ve been a bit different, because I could’ve put my foot down, but I had no confidence in the corners because everything was just sliding. I was gutted. It’s a bit disappointing really; I thought I could man up a little bit and take some painkillers but it was just hurting too much. I’m gutted for the team because we’ve been preparing really well for the season and were riding really good in Europe, and this goes and happens. We’ll see this week, I’m going to hospital on Tuesday and see what they say. It’s only been a week, maybe I’ll just miss the next round and then get back on the bike and hopefully do well.”

“It started well in heat 1 when I grabbed the holeshot, but was unlucky to come together with another rider in the tight S-bend start straight. It pretty much ended the day with the result giving me a poor starting position. It was the same thing Saturday; yes, I made a couple of mistakes, but then I never got much luck with people crashing around me, the show was great and I look forward to next week at the LG Arena, where hopefully things will change and luck will be on my side.” 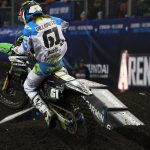 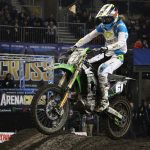 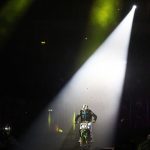