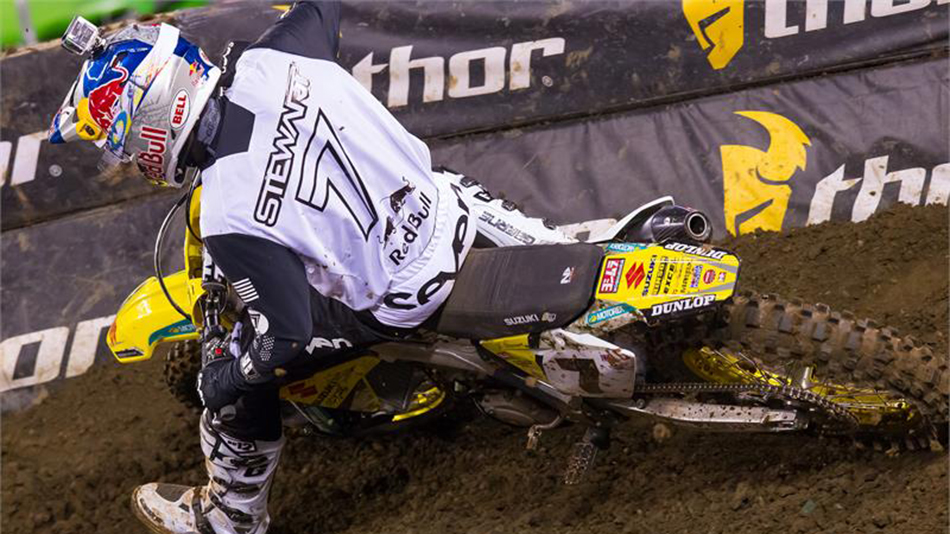 Despite the fact that the track design in East Rutherford offered the riders multiple line choices, James Stewart just could not find a way around Trey Canard in the first 450SX heat race. Stewart was arguably the faster rider; the above lap times tell you that. In fact, he pulled alongside Trey a handful of times. There were two sections where JS7 was superior; he was tripling in the section after the off-camber, and jumping all the way over that triple before the whoops.

Surprisingly, when he did both of these things for the first time (lap three), he set a slower time than Canard. Whereas on the next lap, he chose not to triple after the off-camber, and when he tripled before the whoops, Trey did it too. Somehow, he still set the fastest time of the race. Weird, huh? The eventual heat winner, Canard, was much more consistent with his time, which proved to be pivotal in his success – James’ speed on each lap was quite varied.

The win is something that must have given the Muscle Milk Honda rider more confidence going forward, especially seeing as he beat James Stewart straight up. It may have only been a heat race, but a lot of riders will clutch at anything, in order to boost their self-belief. Trey was not able to put this to good use in the main event, as he finished a lacklustre ninth. The speed is there, though, and that is a good sign moving forward!

This may seem like a strange comparison, as the two riders did not directly battle on-track. But, I thought that it would be interesting to see how much better Ryan Villopoto was, and how close Eli Tomac was to his speed. It was not until lap five that Eli got into second, as soon as he moved into the runner-up spot he set his fastest lap of the race, which was the third fastest lap of the race (Justin Barcia had the second fastest time, and was the only rider other than RV to post a lap in the fifty-four second range).

Interestingly, the 54.693 (Ryan Villopoto’s fastest lap time) was faster than the time that James Stewart set in the heat, despite the fact that the track had taken more rain, and had got a lot tougher, by the time the main rolled around. I am quite surprised that both Ryan and Eli had such consistent times at this stage in the main event, as the track really had deteriorated by this stage of the night. But, despite this, both guys made very few mistakes, especially Villopoto. Before round one, most expected Eli to battle with Villopoto, and the guys of his calibre.

However, if you look at the times highlighted above, the Geico Honda rider still has some work to do, as he consistently lost around half a second a lap. In supercross, losing a tenth can be pivotal, so losing this amount of time a lap soon adds up. But, he is a lot stronger than he was a couple of weeks ago, which is positive, especially with the Lucas Oil Pro Motocross series just around the corner.