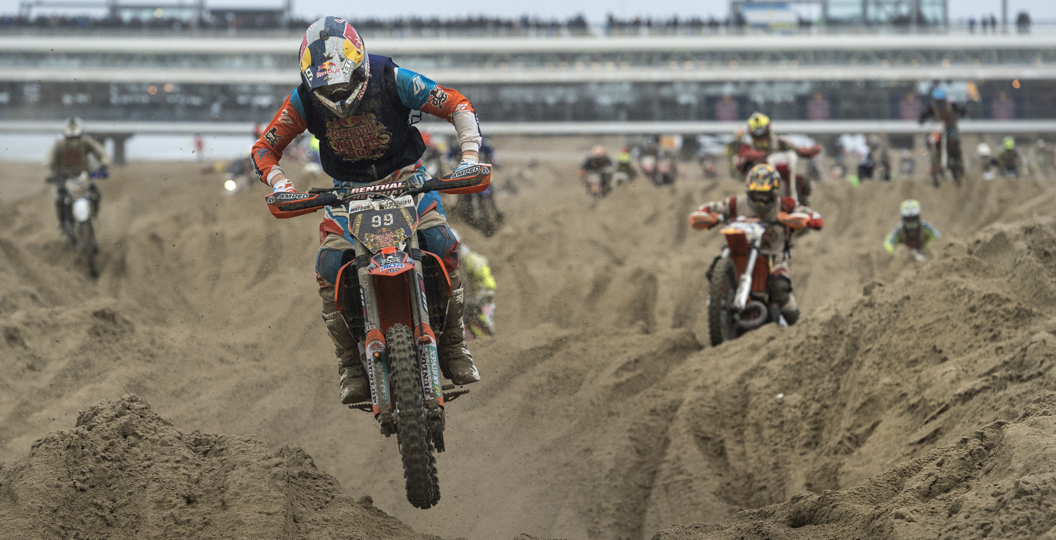 The Buzz: Red Bull Knock Out

When you first loaded up the Red Bull Knock Out live stream, you probably rolled your eyes at the sight of another beach race. How many of them do we need? Red Bull, however, tend to ensure that their events do not follow the same tired, old format.

Consequently riders were presented with one of the toughest circuits in recent memory and a format that would ensure only the best would survive. Treacherous weather conditions only added to the challenge, as high-speed winds meant riders had to be on their toes for the duration. Mistakes, both self-inflicted and not, were prevalent across the lengthy races.

With MXGP regulars Nathan and Ben Watson present, as well as former winners Steve Ramon and Marc de Reuver, there were plenty of stories for motocross fans to sink their teeth into. Marc, unfortunately, didn’t make it to the final after running into mechanical issues in the semi-final. It was a tough blow for the pre-race favourite, but he was quick to exclaim on social media that he’ll be back next year!

Nathan actually won the semi-final, but it wasn’t an uneventful affair, as he was late to the line and had to start at the back. Watson, who was in Red Bull IceOne Husqvarna colours for the final time, rounded the first corner on the cusp of the top two hundred and charged forward for the duration. Did he waste too much energy in that? Perhaps, as afterwards he pointed out that he “needs more experience in those races.”

After taking the early lead, Nathan eventually crashed twice in the final and was forced to settle for the runner-up spot. Despite this, he was full of praise for the event post-race: “Red Bull Knock Out was the most fun I’ve had all year racing. It was such a great event and I’d advise everybody to get an entry next year!” Ben Watson, his younger brother, echoed these thoughts: “It was a good experience and a fun event. I will be back next year for sure!”

Ben’s weekend got off to a promising start, but he soon ran into problems, as he explains: “On Saturday I had my one hour heat and placed fifth. I wasn’t going crazy as I only had to place in the top one hundred and seventy-five, was getting used to a new bike, a new track and actually a new style of riding as it wasn’t like motocross. On Sunday afternoon we had the semi final, where I had a pretty good race and finished in third.”

“Unfortunately there were only forty-five minutes to the final and you weren’t allowed back to the paddock,” he continues. “I was waiting around with the other riders who reached the final and unfortunately there was a little confusion about where and what we had to do. I didn’t manage to find anyone for any fuel, so I made a little plan whilst waiting for the race to start.

Although Ben Watson was restricted to a lowly three hundred and sixth, there was another British rider in the top ten. Privateer hero Matt Moffat battled on to finish eighth and was elated; “To finish eighth behind two world champions and have a fifth in my semi was good. I could have gone harder, but I wouldn’t have been there at the end. Maybe next time I won’t go as hard in the semi – I think a lot of people just went steady until the start of the final. I pushed every race I could, honestly.

“I’m happy with that. I have done a few weeks at Dunkirk – to do well at these events you have to practice in the sand, simple! I’m chuffed with the result and hope to go back next year.”

There were plenty of ‘names’ racing, evidently, but in the end it was the relatively unknown Axel van de Sande who became the fourth winner of the event. Speed and consistency were his greatest assets, as he controlled the race with a sizeable margin once Nathan hit the dirt. The return of this iconic beach race was seemingly a ‘Knock Out’ for Red Bull, so expect it to again become a regular fixture.