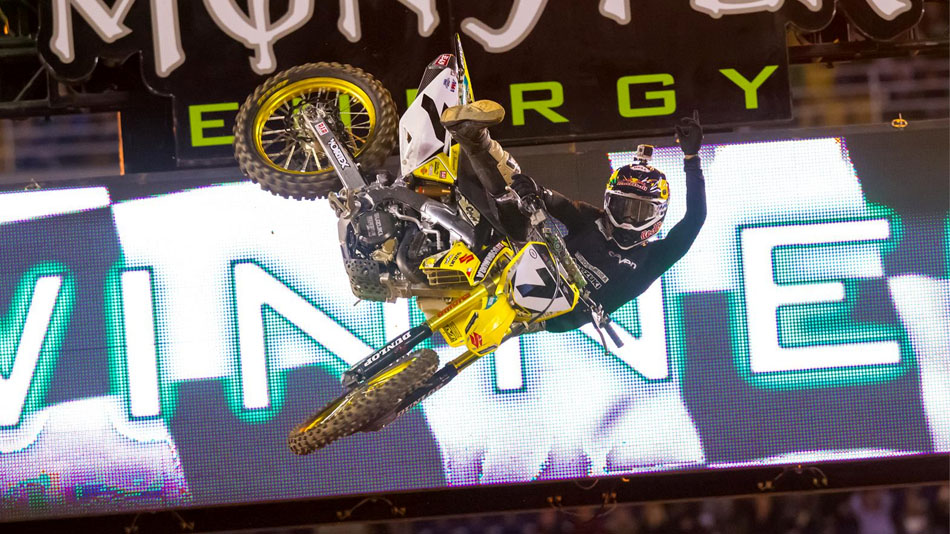 Yoshimura Suzuki Factory Racing’s James Stewart captured his first win of the 2014 AMA/ FIM World Supercross season at round six of the series at Qualcomm Stadium in San Diego, California on Saturday night.

Stewart dominated, racing his Yoshimura Suzuki RM-Z450 to his 46th-career Supercross victory and moving-up yet another position in the overall championship points.

The San Diego race weekend was a good one overall for Stewart: After posting the fastest qualifying time during the day’s practice sessions, he went on to turn-in a rock-solid performance in his heat race and finish second. In the night’s Main Event, Stewart got a good start and took the lead before the end of lap one. After that, he set a competitive pace and led all 20 laps to take victory.

Said Stewart: “I felt like I was riding good. This win has been six weeks coming, but I finally got a good-enough start and the Yoshimura Suzuki RM-Z450 got me up-front on the first lap. I felt great and, about halfway through the race, I felt even better. I just kept feeling stronger and stronger as the race went on. I have to hand it to the Yoshimura Suzuki team; they’ve been fighting for me. Now, hopefully we can build on this momentum as we head into Dallas. We’ll keep on fighting and keep on believing – and hopefully do it again.”