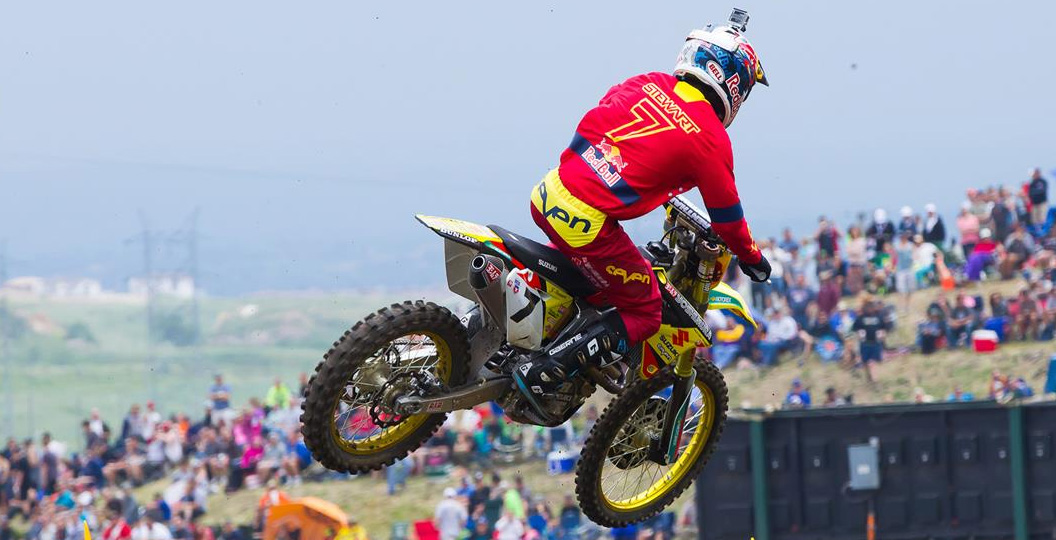 Stewart turned in two solid motos on his Yoshimura Suzuki RM-Z450, taking the win in moto one and finishing third in moto two for second-place overall; moving him up to third in the championship points standings.

In the first moto, Stewart got a spectacular start and moved into the lead almost immediately. From there, the Yoshimura Suzuki rider put his head down and held off the competition, leading every lap to the flag.

“In the first moto, I got a good start on the Yoshimura Suzuki RM-Z450,” said Stewart. “I was able to hold on, even though I had pressure from everybody. It was good times, and it was great to get out there and finally ride like I should. So I was happy about that. I ended up winning the moto, and that was nice.”

In the second moto, Stewart got off the gate in the top-five and began trying to reel in the frontrunners. Despite a brief off-track excursion, his efforts began coming to fruition with about 10 minutes to go. Stewart was able to move into a podium position and hold on to finish third. With the combined results, Stewart was second for the day.

“In the second moto, I didn’t get as good a start as I did in the first,” said Stewart. “I made a mistake in that first corner and a couple of guys got around me. And then we changed something between motos and I wasn’t really sure if it was the right direction, but I kind of struggled with it in the beginning and lost a bunch of time. Then I started coming back up and closing in on the rest of those guys. I made a huge mistake and went off the track and basically did another start. So I lost quite a bit of time right there. But I wound up making the pass for third and getting second overall. So this weekend was definitely better than Glen Helen and better than Hangtown. Every week we’re making improvements. If we keep on in this fashion, we should be solid. So I look forward to Mt. Morris.”

Yoshimura Suzuki Factory Racing’s next race is round four of the 2014 AMA Pro Motocross Championships on June 14th at the High Point National in Mt. Morris.