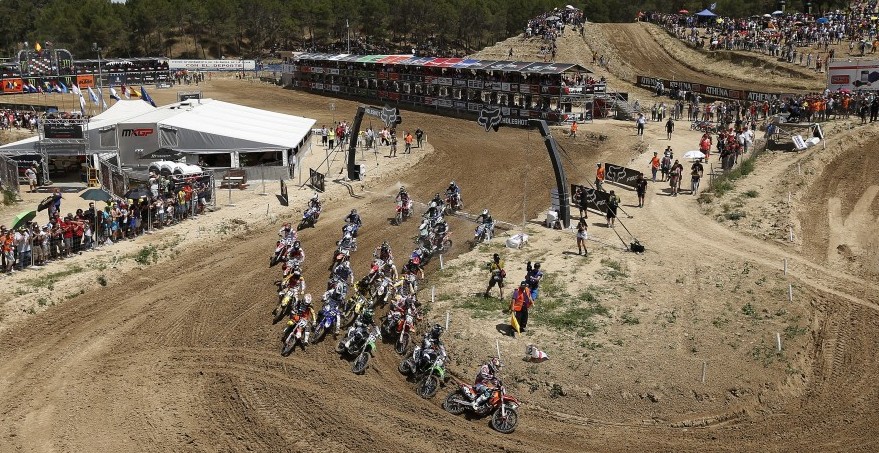 In the last few years Youthstream have made a concerted effort to bring back a couple of older tracks back on the circuit. This year Talavera de la Reina in Spain was the latest addition to a very versatile championship but it came with a little bit of criticism during the weekend.

Despite its GP history, this was the first time in 14 years there was a GP at the circuit so most of the riders had not raced the track before. Over watering left the track one lined and riders such as Kevin Strijbos felt to track was too difficult to pass on as a consequence as did Antonio Cairoli. Even Herlings admitted the track was hard to pass on too but believed you could find some line out there to do the job.

Other riders complained that the track was too slippery. Even Shaun Simpson, known to like old school tracks, wasn’t overly impressed at the track in terms of racing on it. All in all it was a somewhat mixed reaction to a track that the old GP fans loved.

The race highlighted two things, firstly, preparing a track like Talavera is different from modern tracks and they need to work on their watering system for next season. Secondly, the riders find it hard to adapt back to the older style of racing on rock hard tracks.

But despite the rider’s misgivings it forced them to add a new string to their bow. They had to figure out where to pass when there was nowhere and how to adapt to a fast, slick, over-watered track that normally they don’t have. Ultimately it is making them better riders.

The great thing about the GP calendar these days is that there is so much variety in the schedule. You have the old tracks in Spain, Italy, Germany and France, the more modern tracks like Matterley Basin in the UK and totally new tracks like Qatar, Brazil or Thailand. Then you also have the sand of Lommel of Valkenswaard.

Despite misgivings of the older generation about the new jumpier tracks the stark reality is the young riders love those sort of tracks. The more technical jump infested tracks seem to have brought the GP riders on as well.  But crucially Youthstream have added some older school tracks to keep a happy balance and interestingly it is those tracks that the riders seem to find it harder to adjust too.

But this is why the World championship the toughest and most prestigious motocross series in the world because to win it you have to be able to ride a huge variety of circuits, in different countries around the world.

Cairoli often has to play second fiddle to Ryan Villopoto who is commonly hailed as the best motocross rider in the world but that to me is pretty disrespectful to the seven time world champion. Villopoto, as amazing as he is, races in his own country 12 days a year outdoors on fairly similar tracks every week suited precisely to his riding style.

RV is the best rider in America but, the actual World championship would be a totally different ball game for him and it is only there that we can really gauge if he is indeed better than the Antonio Cairoli (or Jeffrey Herlings) as many claim.

In the GPs Cairoli had to move country, learn English, adapt to racing on different types of tracks and learn the sand in order to be World Champion.  It is that adaption to a variety of different circumstances that make you the best in the world, and that is what Cairoli has excelled at.

While Villopoto would without doubt be a serious threat to Cairoli he would still have to adjust to the sheer variety of tracks and countries that make the World Championship unique.

And that is something Youthstream have to be given credit for. They have extended the championship to 18 rounds and brought the series to new countries, continents and circuits. It truly is the real World Championship.

With RV seemingly ready to retire soon maybe it would be the ideal time to come and race the World championship in next year or two on all these different tracks around the world to see if he can adapt and prove he really is the best.  As added incentive, Villopoto would also be the first American to win a world title in over 20 years.

Could Ryan Villopoto beat Cairoli or Herlings (if he moves up next season) to a World title? The challenge is there for Villopoto before he retires to do something no top American has been brave enough to do in recent times- race outside the comfort of their country and try to beat the World Champion in the World Championship. But will he accept it?