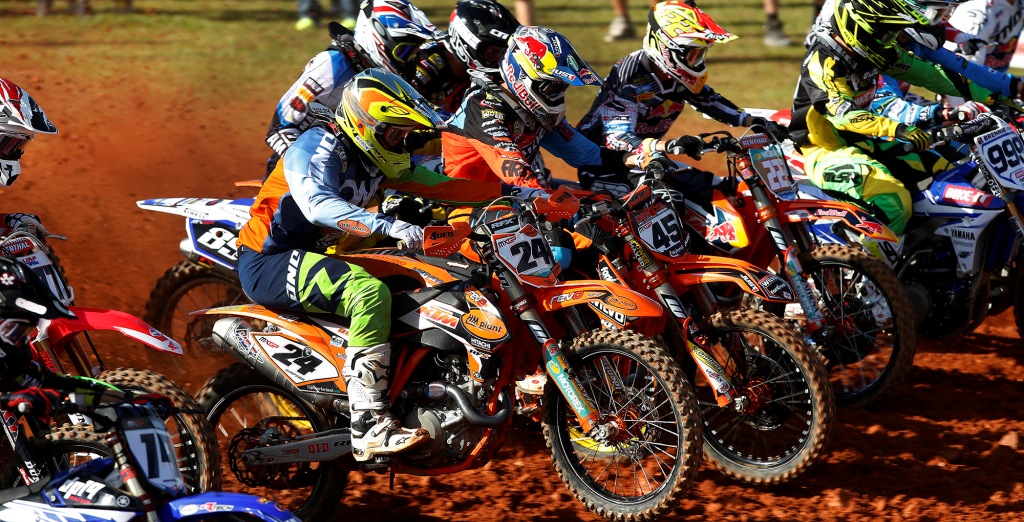 After a triumphant first outing in the British Championship two weeks ago HM Plant KTM UK – now bolstered with Gatorade as an official partner – travelled to the confines of the Beto Carrero circuit; acting as host for the third year in a row of the Brazilian Grand Prix. On the tough and bumpy red dirt Shaun Simpson and Mel Pocock both endured a largely unremarkable weekend of incident and bad luck that kept the duo outside of the top ten in the MXGP and MX2 classes respectively.

Compact, rutty and littered with jumps, Beto Carrero had changed very little from the two previous editions. The heat and humidity was again a factor in the demanding conditions and, typically for this meeting, the crowd played a key part in a lively and raucous atmosphere.

Simpson eased his way to sixth position in Saturday’s qualification heat after running fourth for long periods and eventually did not want to use too much energy for what was an already decent gate pick for Sunday. The Scot signalled his intent during warm-up with the third fastest lap-time and was set for a positive day of racing. Sadly his fortunes swung to the other extreme come game-time.

In the first moto of 30 minutes and 2 laps Shaun was undone in the formative stages when he ran into the fallen August Justs. The collision caused damage to the front brake disc of the KTM and the current British Championship leader had to circulate without any stopping power for the rest of the distance. He eventually made it to 15th by the flag. The result in the second moto would be marginally better – 13th – but Simpson was hindered by another bad launch from the gate and two brief crashes that cost valuable time.

The former GP winner is 13th in the championship standings but just 20 points from the top eight.

Mel Pocock steered the 250SX-F to 12th position overall in just his third international appearance for the team and in orange. The first race was an adventure for the former European Champion as a slight mistake on the uphill triple jump saw him run off the track and lose positions and riding kit! He recovered his cool and fought back to 15th. At the second time of asking Mel was again in the wars. He could not avoid a first turn pile-up that collected five other riders and again faced a trek through the field. This time he made it to 13th.

HM Plant KTM UK head back across the Atlantic to begin a busy schedule that will involve a summer of European Grand Prix dates and further appointments in the UK as the domestic series stretches on through its eight round campaign. Next up is round two of the British competition at Lyng in Norfolk while the GP of Trentino – the fourth FIM MXGP stop – on April 13th follows.

Shaun Simpson: “If you crash four times in two motos then you are not going to do a lot! My starts let me down today big-time. We seem to be nailing them on occasions and then being way-off on others; so we’ve got some work to do on that because starts were crucial today. In the first race, even with no front brake, my pace is great but to fall off twice after a worse start in the second was not good. 15-13; not what I was looking for really especially when I felt like I could have done something decent. Lyng next week and I’ll have to make sure I’m ready for it…but it is a track I like. I’m looking forward to getting back to Europe.”

Mel Pocock: “I guess I’m a bit off the pace at the moment and I need to sort it out. I wasn’t doing too badly in the first race actually and was sat inside the top ten. I felt comfortable but I over-jumped the triple up the hill and could stop for the corner. I went straight through the post and railing. It was a bit of a ‘moment’. I squashed my finger, banged my head and lost a glove. I re-grouped and finished fifteenth. In the next race I had a good start but in the first corner someone went down in front of me and I was collected up like-a-bastard. It was a mess. I came through to thirteenth and not really a great day to dwell on but I’m in one piece. The ruts were deep out there. I’m excited about Lyng next weekend as it is one of my favourite tracks.”