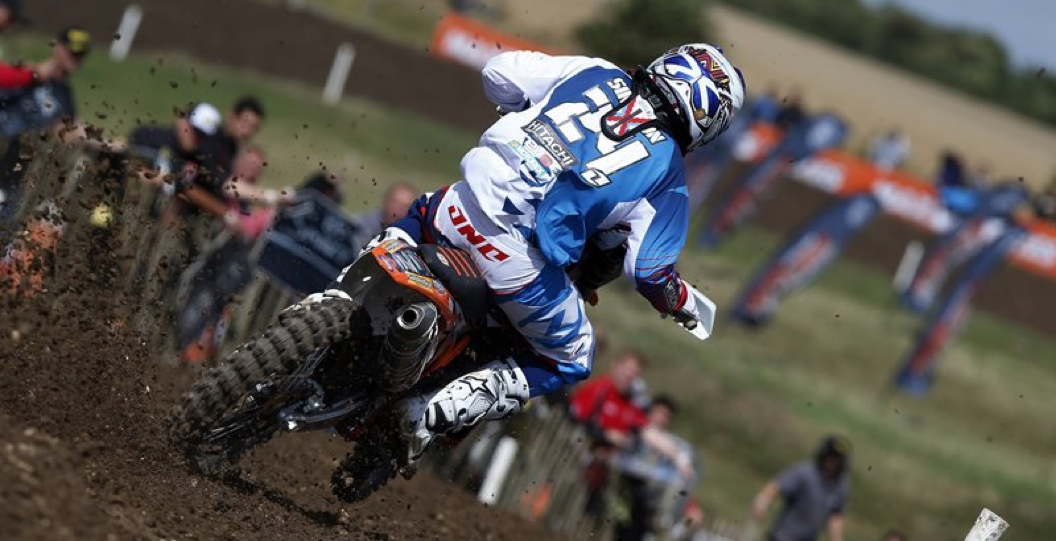 For Hitachi Construction Equipment UK KTM, the seventh round of the Maxxis British Motocross Championship has been a reason to celebrate. Despite severe weather forecast for much of the south west, Cusses Gorse was lucky to escape much of it, and saw the team celebrate its second MX1 championship.

On a wet but solid track, the morning’s qualifying sessions got the day underway; after the customary super-pole sessions, Shaun Simpson led the MX1 class on pole with Josh Spinks in eighteenth. In the MX2 class, teenager Ben Watson was second-fastest, followed by Mel Pocock in fifth and James Cottrell in fifteenth.

After a season’s firsts and seconds, the MX1 championship has been within reaching distance for Shaun. Despite reigning champion Kristian Whatley taking the first of three races on the day, it was only a delay of the inevitable. In race two, Shaun simply took charge in lap two, checked out and then, after twenty-seven minutes, crossed the finish line with a flourish, a heel-clicker, to celebrate his championship win. The final race of the day was hard work; although in second for all but three laps, Shaun ended the day with another win and the overall on the day.

For Mel, things were not as rosy in the MX2 class. The first race didn’t go to plan; a bad start and inability to make any significant passes left Mel in sixth at the chequered flag. Some changes and tweaks between the first and second races made a significant difference though; in the latter two races, Mel quickly had his groove back to give KTM rival Matiss Karro a good run for his money, adding two seconds and a second overall to his score.

Ben also had a nightmare in the first race of the day. Downed in the first corner, he had to fight his way back to the front, but in the tight, twisty corners, he found it difficult to make passes stick, and had to end the race in sixteenth. The second race saw Ben in third for all but three laps; with time running out, he was outgunned by Steven Lenoir, ending fourth. The final race again saw Ben all the way up front, only to lose fourth with several laps to go for sixth, and finishing the day in seventh.

James suffered another setback. After a bad weekend in Lommel, he was hoping to improve on his results, only to go down in lap one of race one and struggling to make progress. A mid-pack start in race two ended five laps later with James agonisingly forced to pull out and having to sit out race three as well.

In the first race, Josh found himself limping home in twenty-second after a flat tyre scuppered his chances at a top fifteen. The second race improved significantly though. A solid run in sixteenth ended in fifteenth, while the final race of the day ended another place up with a fourteenth at the chequered flag. Despite the first race result, Josh ended the round with a respectable sixteenth place on the day.

“I’m more disappointed about the first race, we’d done some changes after the first race that we should’ve done before. It made a difference in the bike on this track. The first race was a bit of a nightmare, I got a bad start and couldn’t progress any further than sixth, but in the next races we sorted the bike out and I rode with my heart and did the best I could.”

“It was a tough day today off a tough weekend last weekend at Lommel. Perhaps it’s too much too soon; I thought I was making headway with my foot and my heel after I broke it, but I had a scan in the week and the results came back and it was still as broken as the day I’d done it. I need to either address that and get it sorted out straight away and miss the rest of the season, or I try to tough it out and go on the way I am and that’s not doing me any good at the moment anyway. The results aren’t what they should be, fifteenths and sixteenths in the British championship isn’t me, I need to be well inside the top eight, I should be fighting for top fives really. I have five weeks to the next round, I’ll go back and see what the plan is, what I should do and maybe try and sort it out for the last one and end on a high at Foxhills.”

“Today wasn’t too bad, qualifying was really good, the first part wasn’t amazing but the super-pole was good, I had a clear lap and managed to get away with second, which is my best qualifying yet. First race I had a not too bad start and unfortunately Mackenzie just put his foot out in front of me and I couldn’t do anything but lose the front end. So I went down first corner first race and ruined that one. I found it hard to pass around here so I only got up to sixteenth, but the last two races I got better starts. In the second race I was second around the first corner and rode safe but trying to go fast and I ended up fourth, and in the last race I didn’t have such a good start, in the top five, and ended sixth, so I was happy with that, just have to keep on it.”

“It was a tough old day. The goal today was two things and that was first of all to win the championship, and second of all to stand on the top step of the podium. I would’ve liked to have done it with 1-1-1, it was looking like it was going to go 2-1-2 for a first overall, but Graeme crashed and unfortunately for him that’s cost him a lot today. It’s a shame for him, he’s trying hard, he was absolutely flying and Kristian and I had nothing for him, and we were just having our own little battle. You’ve got to finish the race, and I pride myself on that and that’s why at this stage of the year I’ve managed to win the championship. My worst result to date is still the first race of the year, which was a third, every other race has been a second or a win. Consistency was key in this championship, and I just want to thank everyone, my personal sponsors, my team, my mum, my dad, my girlfriend, just for being there.”

“Qualifying was a lot smoother than previous rounds, fourteenth for the majority but slipping back to eighteenth by the end of the session. Race one, after an average start I began to push forward into the top fifteen, before I got a flat tyre at the mid-stage that pushed me back to twenty-second. In race two I didn’t have a great start but I pushed all the way to the flag making some good passes to finish fifteenth. I had a better start in the final race but got caught up in the second corner, and shortly after had a little crash but I managed to pull all the way through to fourteenth and sixteenth overall on the day.”

“Today was all about Shaun just doing what he had to do in order to secure his second British Championship, but in true champion style he once again secured the overall podium. It marks another milestone in the team’s history with Shaun becoming our first rider to win British Motocross Championships for us in both classes. At both world and British level he has exceeded our expectations for 2014, and the season isn’t over just yet!

“In MX2, Mel had a tough first moto where he didn’t really get into a race-pace, but he certainly upped his game in the other two motos and secured the second step of the podium. Although there are only three races to go, we all know only too well that anything can happen in motocross and we look forward to the finale in a few weeks time at Foxhill. Ben Watson again showed his potential in today’s motos with steady results and showed good speed. James Cottrell is still suffering the effects of his ankle injury and had a tough day. On a final note, we were able to welcome James Dunn back to his first event, albeit as a spectator, since his serious leg injury at Canada Heights. Thankfully, his rehabilitation is going well and he will soon undergo another operation to repair the ligament damage.”