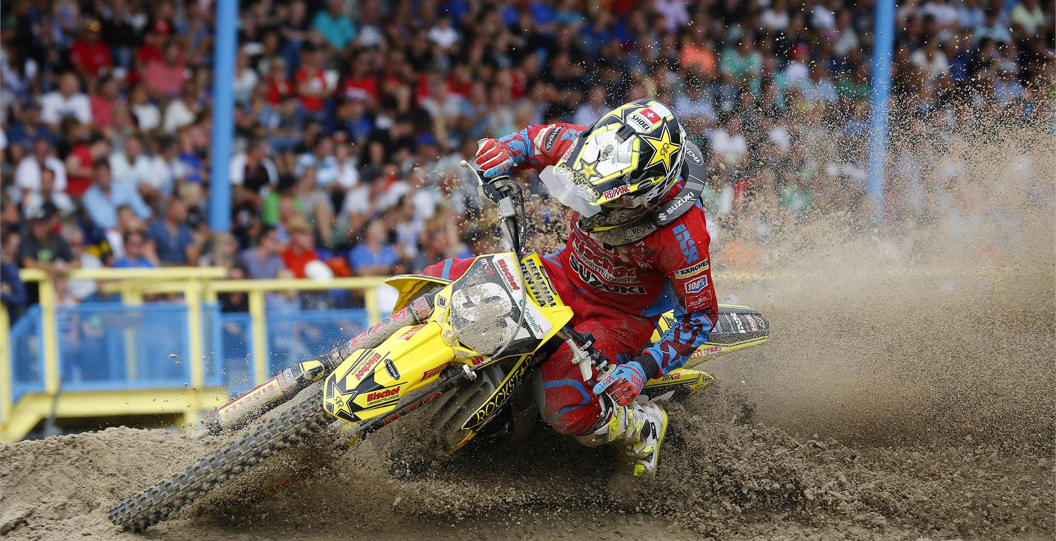 Jeremy Seewer battled punishing sand at the short and narrow temporary motocross layout to put his RM-Z250 into fifth position overall with a 10-3 scorecard at Assen today.

Some 37,000 spectators filled the grandstand from the last corner and main straight of the hallowed MotoGP circuit for a superb general view of the Grand Prix of the Netherlands and round 16 of 18 in the 2015 FIM Motocross World Championship.

The course was built in just four days and from a major importation of powdery sand from a local site. With a hard base the terrain mixed soft sections with hard-packed edges and bumps and the rough nature of the surface meant it was a draining and technical – if a little short – track to negotiate.

Seewer attempted to blast out of the start gate on Sunday but was dismayed to find himself mid-pack around the first turn and the Swiss then struggle to put together a rhythm to gain positions quickly. He ended the first moto in 10th place. The ‘#91’ made a much better job at the launch of the second race. He almost snared the holeshot but swept into second position. He lost a slot to Tim Gajser but stayed ahead of Brent Van Doninck for third place and his first top-three moto result since the Grand Prix of Sweden.

In the MX2 standings Seewer is fifth and just six points from the top-four and he has a comfortable 49 point gap over Julien Lieber.

Assen was also home to the ninth and final round of the EMX250 European Championship and with Brian Hsu out injured with a sore right wrist (although the German will be present in the MX2 class for the final two meetings of the year) it was left to Bas Vaessen to push his RM-Z250 on home territory. The youngster finished outside of the points in the first moto after a crash and then an electrical problem ended the season with 16th. Hsu rounds off the same contest with seventh in a campaign where he scored his first moto win and podium finishes with the RM-Z250 four-stroke.

The Grand Prix of Mexico at Leon for the second year in a row will represent the penultimate round of the 2015 series and will take place after one free weekend.

Jeremy Seewer: “It was a tough GP and something that we don’t find often, the sand was like being on the beach – on holiday. I didn’t feel bad all weekend but somehow I was also riding a bit too safe. I was scared of crashing hard because some of those ‘kickers’ were huge. I had a good flow and feeling at Lommel but this was something different and it was hard to react to the bumps; you never really knew what the bike would do. In the first moto I had a bad start and it was very tough to come back. I could only manage 10th, which was really disappointing. The second race was much better and started almost with a holeshot. I actually didn’t know that Jonass was lapped when he was riding with me. My mechanic was showing me the board saying ‘P2’ and I was thinking ‘but there are two guys in front of me’. Anyway I finished third, which is really good for me in the sand but I still need to work on it. I know I can get better and better.”

Bas Vaessen: “The weekend overall was pretty good and I was happy with my riding. I was working my way to the front in the first moto when Adam Sterry and I fell together and I couldn’t get my bike started. I was a lap behind but followed Kouwenberg pretty easily until the bike had a problem. It was a bummer but today I was good and rode consistently without many mistakes. At the beginning of the season I was having some tough times and the level of the championship surprised me. All the guys fight so hard and for a kid on a 250 for the first time it was a little scary! I found a good set-up and could charge more in later races. I also saw I could go for podiums but had too many crashes.”