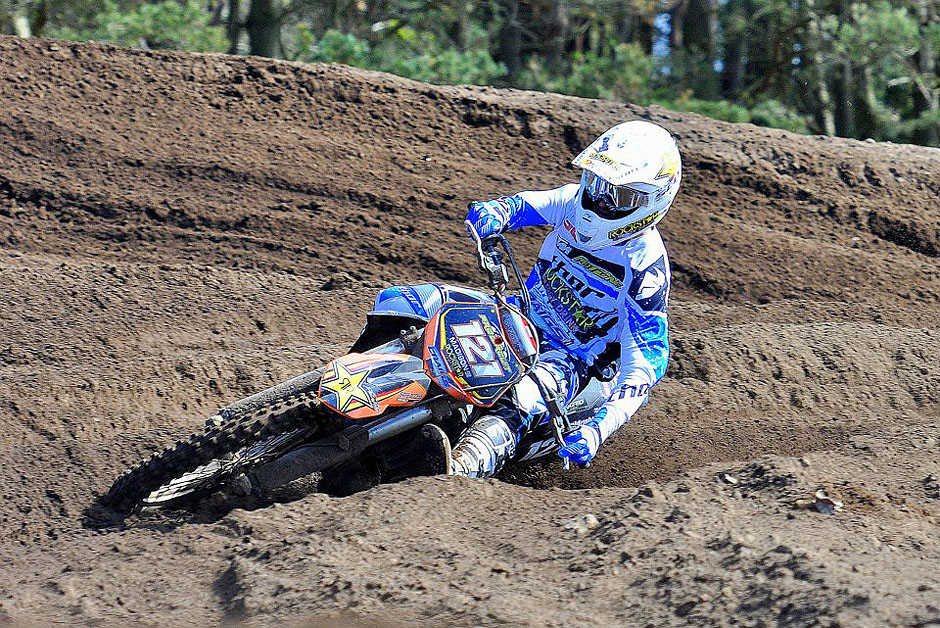 Due to some horrendous wet weather in Scotland throughout last week, round two of the Scottish Adult and Youth Motocross Championships had to make a last minute switch from the waterlogged Fife Community racetrack at Cardenden to Comerton Farm in Leuchars. This round of course would still be run by the FCOMC committee and its club officials despite this last minute change of venue.

The racetrack at Comerton had undergone some overnight grading and general running maintenance after the youth’s race-day on the Saturday, and despite all the rain during the week prior to the event the course still looked immaculate come Sunday morning as we awaited the start of race one.

The four formulas in the day’s race programme were for MX1 – MX2 – Veterans , and a Clubman class. With all the formalities of sruitineering and signing-on now completed it looked like we were in for yet another fantastic day of S.A.C.U Scottish Motocross as practise got underway.

The racing in the Safe Access sponsored MX1 class was fast and furious to say the least and Jamie Law was the star of the show over the three legs. Ross Rutherford holeshotted moto one and lead momentarily but he was soon overhauled by the flying Law who dominated this class for the deserved overall win from Rutherford in second. Peter Mitchell was never far from the front two and he filled the last podium spot for a well-earned third. Just outside the top three was an extremely quick Gavin Robertson who battled hard to make ground on the front runners over the three legs, although he would still be happy enough with his fourth position finish overall.

The MX2 riders put on a spectacular show for the sun soaked Comerton  onlookers. Brian MacKenzie was the man on a mission in this class as he strolled to the overall win and made it look comparatively easy as he circumnavigated the deep sandy racetrack. Ryan Livingstone whipped his KTM to within an inch of its life to stay with MacKenzie over the three legs but the runner up spot would have to suffice for his hard day’s graft. The impressive youngster John Adamson was once again flying over the table-top’s and jumps on his AAA Motorcycle Honda CRF 250 and took home some well-earned prize money for his hard endeavours and his third place finish. David Huston really deserved a better final position than fourth overall for the hard work and commitment he put in throughout the day, but being in the top four placings with bike and rider intact and unscathed was still a massive result for him.

The guy’s in the AMD Plant Hire sponsored Veteran’s class still showed that they may be getting on years but nevertheless have never lost any of the enthusiasm or passion for their beloved off-road sport. Darren Scott was the top dog over the course of the three legs and brought his extremely quick four banger Honda home to a well-deserved overall win. Peter “Pedro” Taylor did much of the early running in this class over the course of the day and he was slightly unfortunate not to take the top spot come the final whistle. Les Winthrop managed to step onto the final podium spot in third overall which was still a massive achievement for him as he was very quick over the three legs on his KTM. Graham Anderson and Morton Hannah had a ding dong encounter in the superb Comerton sunshine, but Anderson would eventually finish in front of the Ayrshire man at the chequered flag as Hannah would take an excursion off his motorcycle in race two.

There was standing room only at the start gate as the Clubman class lined up for their last race of the day. Alex Kerr was the outstanding rider in this class despite hitting the Comerton sand on more than one occasion. Although having said that he was still super quick from the gate and he certainly still deserved the accolade of his winners title. Michael Graham was the eventual runner up in this class and he did just enough to secure his prize money and a place on the final top three score sheet. Greg MacDonald filled the third place position with a superb ride on his YZF Yamaha.

Despite all the upheaval and the last minute change of venue the weekend’s race programme went ahead without further incident. This of course was all down to the organisation and commitment of all concerned who pulled together to make the second round of the Scottish championship such a success. And to crown it all as the rest of Britain were being battered with torrential rain and major racing events up and down the country cancelled in their droves, we successfully completed a full weekend of racing in almost perfect conditions.

Organisers and officials at the S.A.C.U and F.C.O.M.C would like to thank all marshall’s and race controllers for their huge effort over the weekend to make this occasion the success it was, and we hope to continue the professionalism and dedication you have shown as we head to Round 3 at Lochgilphead on the weekend of 2nd / 3rd June.