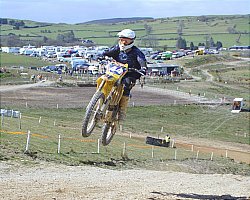 Round 3 Club and Welsh Championship

AFTER the thrills and spills of the Grand National on the Saturday, Sunday brought Rhayader Youth Motocross Clubs turn to supply the excitement and they did not disappoint, as they held the third round of the club and Welsh Championship at Cwmithig hill. The old school, hill side track had been spruced up by RYMXC, prepped to perfection and with the date cleverly set 2 weeks prior to GT cup at the same venue, it saw an influx of new riders looking for a good chance to practice.

Sunday morning saw blue skies and the sun shining down on the picturesque circuit, although it remained cold as the welsh wind ripped through the paddock, things were soon to heat up as the autos lined up to get the day of racing underway!

The autos saw visitor to the club Bryn Brooks take all three wins in style! Behind him was Charlie Palmer who looked to be on pace with Bryn but couldn’t quite match his smooth consistently fast laps and had to settle for second. In a hard fought third was local club member Tomos Wright. Tomos rode superbly getting a three four three on the results sheet and edging out Lewis Roden, leaving Lewis in fourth.

Up next was Rhayaders chance to show off as their man Ryan Rowlands put a show on taking three clear wins in the junior class. Ryan has watched stars such as Brad Anderson and Gordan Crockard race around his local track since he was knee high and grabbed the chance to follow in their footsteps with a very impressive ride! Behind Ryan there was some close racing between James Hyett, Rhys Martin and Ross Innocent, all sharing a mixture of podium places but eventually second place was taken by Ross Martin and third by Ross Innocent.

In the SW 85 class Henry Sidiqui took the overall win with two race wins and second in the third race, local rider Alex ‘Bubba’ Walton had the reverse result taking two seconds and a well deserved win in the final race! The battle for third was very close and hard fought between Giles Jones and Joe Cadwallader, the boys were tied after the first two races leaving the third race as a decider. At the end of the day it was it was Joe who took the final spot on the podium, leaving Giles in fourth after a brilliant ride!

The big wheels it was Robert Yates that took the overall after a first, second, first. In second was a previous visitor to the club Henry Williams. Henry took a third, first, second leaving Luke Craig to round off the top three with a second and two thirds! All these results showing what close racing we saw by the boys on the 85s! In fourth after a good ride was well known wild child and club member Ieuan Morgan.

One of the fullest gates of the day was the senior class with lots of fresh faces ready to hit the track! In a very high classed field it was Corie Southwood who put his Suzuki on the top spot after three hot wins! They weren’t run away wins but more impressively had three good starts and set fast, consistent, mistake free laps to edge away from the rest of the field! Three seconds were taken by Jay Thomas but they were hard fought with Carl Haycock who took third. Yet again Danny Morris and Adam James found each other on the track and raced hard and fast all day.

The adult class was split which meant the Rookies had the track to themselves. This let us all see Martin Rossiter have a great ride and take three wins over previous winner Robert March in second and Danny Morris in third. Championship hopeful Rhys Davies took an overall fifth on the day, after not having his best day on the track. Fan favourite and general nice guy Ryan Kinsey Jones went all out to please his fans but crashed four laps into the first race picking up a recurring injury, he dug deep and rode all day to take eighth. Personally I think he’s planning on packing in the brick laying and is going to work for the environment agency due to all the soil samples he been taken lately.

The split also meant it was an expert only race and number 121 Dominic Foreman showed some serious speed around the fast flowing track – pulling away from the rest lap by lap! In second was Matthew Thomas taking second, third, second. In third was Matthew Allen with a consistent days riding. Rhayader club star Ollie Paine finished in a very disappointing  fifteenth after a second race DNF but took a superb fourth in race one and third in race three in a quality stacked field.

RYMXC stepping up and using the top track at Cwmithig Hill really paid off and supplied a day full of high quality close racing. The club enjoyed seeing all the new faces that joined them at their friendly down to earth club for the weekend. The GT cup comes to Cwmithig on the 28th and 29th April, spectators are obviously welcome and it will be a superb day out! RYMXCs next round is to be held at Home Farm, Abbeycwmhir on the 20th May, four weeks prior to the Welsh Two Day Enduro.