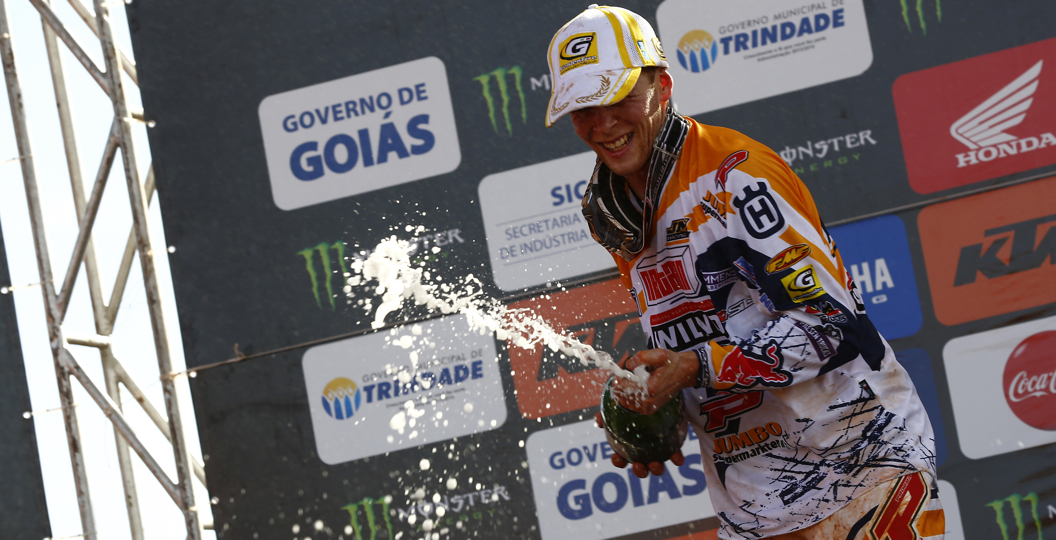 Frenchman Romain Febvre and the Wilvo Nestaan Husqvarna Factory Racing team have secured their first overall MX2 victory, topping the overall podium at the penultimate round of the 2014 MXGP series in Trindade, Brazil.

Entering round 16 of the series severely under the weather, Febvre shrugged off his flu-like symptoms by taking victory inSaturday’s MX2 qualification race. Feeling comfortable on the hard pack, jump filled circuit, the Husqvarna rider started strongly in race one on Sunday and quickly took control of the lead. Despite some pressure in the closing stages, the Frenchman kept his cool to secure a debut race win. With thoughts of a potential overall victory on his mind, Febvre made a cautious start to race two as he settled into the slippery conditions. Digging deep, he methodically worked his way from seventh to third and in doing so secured the overall win.

For Febvre’s teammate Aleksandr Tonkov the weekend was one of mixed fortunes. Third place in qualification showed he was right on pace but numerous small mistakes during race day proved costly. Ninth in race one, the Russian slipped back to 12th in race two.

Looking to build on his strong run of form from the four previous European rounds of the MXGP series, Red Bull IceOne Husqvarna Factory Racing’s Dean Ferris’ weekend ended abruptly in race two. Sixth in qualification the Australian put himself in a prime position for a solid performance. Gating second in race one, Ferris delivered a brilliant ride to eventually place sixth. Moving into contention for an overall podium by holding down a top five position during race two, Ferris’ GP ended when he crashed heavily. Hitting the ground at speed Ferris sustained a broken right femur.

The 2014 FIM Motocross World Championship concludes with round 17 at Leon, Mexico on September 14.

Romain Febvre: “This is an incredible moment for me. I won my first race and took my first overall result – it’s fantastic. I’ve been really sick and I honestly didn’t expect to show this form. During the races I could hardly breathe, I was even sick – it was really hard. Race one was perfect – a start to finish victory. Maybe nerves got the better of me at the beginning of race two or maybe it was the sickness because I was slow to get going. I had to dig deep at the end of the race but when I crossed the finish line in third it felt amazing to know I was the overall winner. A massive thanks to the Husqvarna, the Wilvo Nestaan team and my family for helping me achieve this important result.”

Antti Pyrhönen (Red Bull IceOne Husqvarna Factory Racing Team Manager): “This is a very unfortunate end to our season. Dean fell and broke his right femur in the second moto and will undergo surgery to fix the break. We will release an update on Dean’s condition following his surgery.”