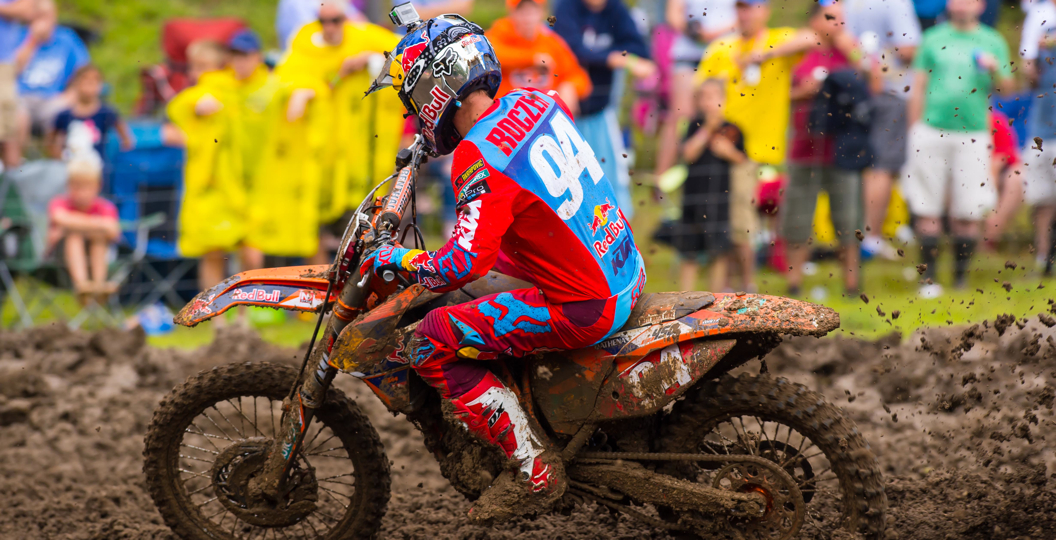 The Ironman course was greeted with heavy rain for the morning practice sessions which resulted in varied lap times for all riders. Ken Roczen managed to turn the 3rd fastest time of the morning while Ryan Dungey had the 12th fastest qualifying time.

On his KTM 450 SX-F Roczen selected a solid gate and pulled a large holeshot in the first moto. Dungey had a decent jump but was pushed off the track and re-entered in 15th position. By the end of the first lap Dungey had moved into 9th place and continued to pick off riders. On lap three Dungey was already up to 3rd position approximately 15 seconds behind Trey Canard. A few laps later, Dungey was able to move into the runner-up position and began trying to catch Roczen.

The German rider knew he needed to take a win at this race to strengthen his lead and he continued to charge out front not allowing Dungey to gain time. When the checkered flag flew, Roczen captured the moto win with a 17 second lead over Dungey.

“It feels great to get a win here,” stated Roczen on the podium. “I thought this track looked really good when it was dry but it was also a lot of fun wet. This might be my new favorite track.”

In the second moto Roczen earned another great start and came around 2nd behind Canard. Dungey encountered issues off the start once more and was 17th around the first few corners. A few struggles throughout the moto caused Dungey to discard his goggles in the beginning of the race which caused a problem later as he moved through the pack with poor vision. Dungey was able to climb back to 9th by the moto end while Roczen rode a mistake-free race to finish 2nd. Dungey’s 2-9 finish earned him 3rd overall for the day while Roczen’s results gave him the overall win and extended his point lead heading to the final round.

“I’m really happy to gain some points toward the championship today,” said Roczen. “I haven’t lost the red plate since the second race of the series and I don’t plan on losing it now.”