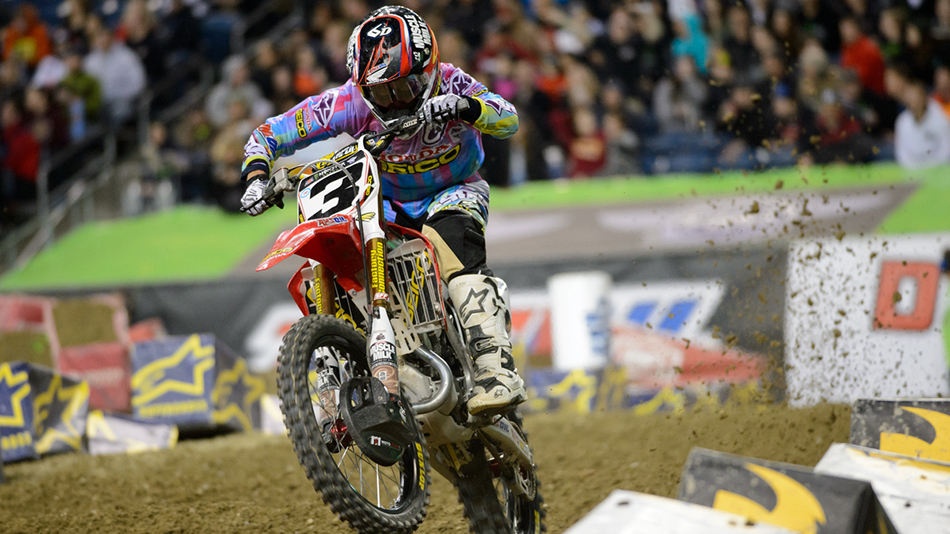 Andrew Short: “Nights like tonight are really fun for racing and that’s what I live for. I’m looking forward to these next two races to try to finish off the season strong.”

Josh Hill: “I had a lot of fun. You know it was good to get a little [semi] win in front of the hometown crowd. I had a decent start [in the main event], around 10th place, but then I kind of got bumped going into the second turn and went backwards. I still felt good, and I was pushing for it, but I ended bending my rear rotor so my back brake was locking up on me and I couldn’t really tell what was going on. It was a tough race.”

Eli Tomac: “Overall I am pretty satisfied with the night. It was a long 20 laps, but I’m getting stronger and stronger each weekend. It was an okay start; I was somewhere around the top seven, then made some early passes and ended up settling in fourth place.”

Zach Osborne: “The heat race was really good for me. I got off to a decent start and then I had a good battle with Malcolm [Stewart] and then Dean [Wilson] after he crashed. In the main event I just blew the start. I was 15th and rode to a mediocre sixth. I really feel like I let one slip away tonight. Being on the podium seemed to be within my reach after the heat race ride, so I am a bit disappointed.”

Ryan Dungey: “I am not happy with the way I rode and I made quite a few mistakes tonight. I need to go back to the drawing board this week with the team in California. Having a weekend away from racing should do me good and I want to come out at New Jersey feeling refreshed and ready to go.”

Ken Roczen: “I just didn’t ride very well. I am really lucky that I managed to save myself from crashing in those whoops. That could have ended up a lot worse. I just didn’t find my rhythm again after that. I battled with Shorty and Canard for quite a bit but I just didn’t have my A game on tonight.”

Ryan Villopoto: “It feels great to win in front of all my friends and family here in Seattle. We were a little off in the heat race, but in the main event the bike was on and I was on. We inched closer to wrapping the title up but all we can do is win races and see where everything falls.”

Justin Hill: “I knew the track was going to be just as tough as the competition. I had the speed to win tonight but the track was sketchy in spots and I didn’t want to risk hitting the ground. I’m excited to get to Vegas to go head to head with everyone to finish off the season.”

Dean Wilson: “Tonight wasn’t what I wanted. But at least we were up front going for it. The goal is always to win races and that’s all I want. I felt great all day, but just made one too many mistakes. I’m looking forward to go out on top in Vegas.”

Jason Anderson: “Seattle was a pretty good weekend. Coming out with the points lead. Going into the last race with a very good chance to win this championship. That’s all I want!”

James Stewart: “Today was a bit of a struggle. I never could really get comfortable with changes we made to the bike. I was trying to make-up time in the race, but it was really easy to override the track because of the ruts. I’m not quite 100 per cent yet but I felt like I rode good, so this was kind of a bummer. But we’ve still got two races left and I’m looking forward to having a week off to get totally healthy. I have to thank the Yoshimura Suzuki team for their hard work and for standing by me. We’re second in the overall championship points and I’m just looking forward to going into the last two races of the season strong.”