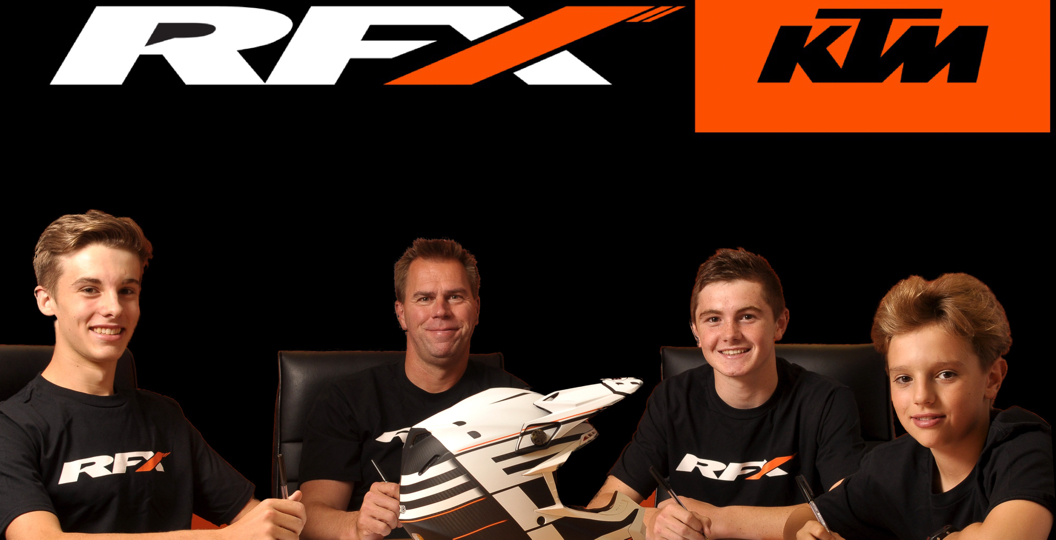 We are delighted to announce the introduction of a new team in the Youth and Pro paddocks for 2016. ‘RFX KTM’ consists of three up and coming riders, all trained by the one and only RMJ, who will be chasing points and podium finishes in MX2, MXY2 and BW85 classes.

The talented, determined and experienced trio of Nathan Dixon, Henry Williams and Joel Rizzi will be competing in the MX Nationals, Maxxis, BYN and European championships.

RFX KTM is the brainchild of Paul and Sam Irwin, owners and directors of the one of the biggest off-road distribution companies in the UK, Race FX Limited, and hard parts brand RFX. Paul, who raced himself, is passionate about developing the sport and in 2014 established the increasingly popular Michelin MX Nationals series with the help of his father Neil who is also no stranger to organising top flight MX events.

Nathan, Henry and Joel have been team members for a number of years racing under the banner of Feehily MX. With full and continued support from Wayne Feehily and his online business feehilymx.co.uk the team are looking forward to the 2016 season, this progression proves all the hard work that has been put in over the last few years has not gone unnoticed.

The riders will be running almost every product and brand available through Race FX, proving they really do supply everything you need to go racing at the highest level.

Also working closely with the team as a new sponsor for 2016 will be KTM main dealer ‘Rocket Centre’ who will be supplying the bikes and genuine parts from their impressive showroom and parts department in Blackburn.

Now the riders are all signed up and the deals have been done the team will officially launch on the 1st November at the Stoneleigh International Dirt Bike Show.