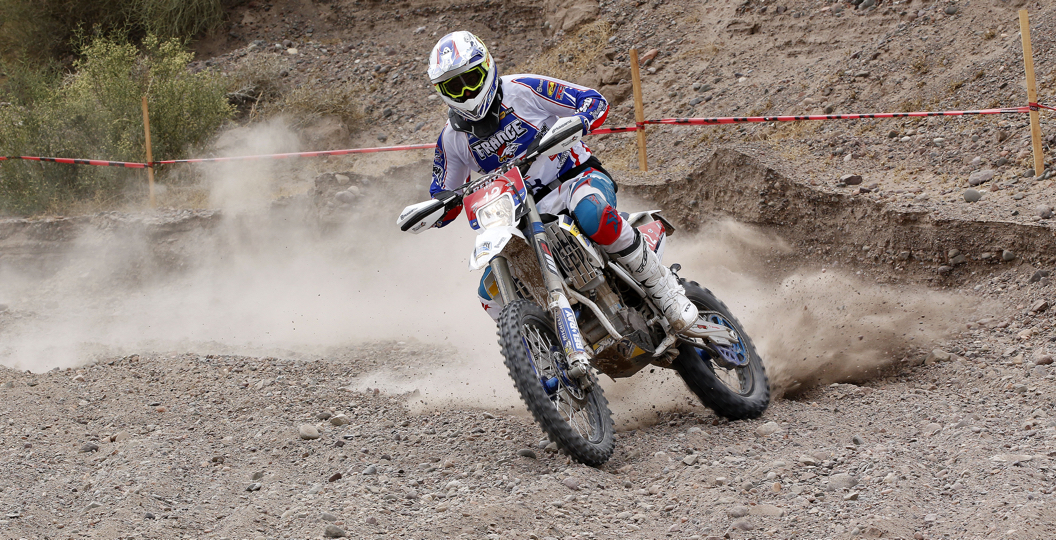 Capping off what has been an incredible season for the 2014 Enduro 2 World Champion, Renet delivered the goods in Argentina to secure the outright win in the ISDE. Along with proving to be the fastest rider in the weeklong event, Pela also topped the Enduro 2 category on his TE 450 while helping France to victory in the FIM World Trophy classification.

Starting as he meant to go one, Renet immediately got down to business by claiming a confident victory at the end of the opening day of competition. Another win on day two firmly established the Frenchman at the head of the overall standings. With day three of the race seeing the ISDE’s worst rate of attrition for many years – 111 riders failed to see the end of the day – Renet powered on and further extended his advantage. Comfortably poised at the head of the standings he placed inside the top three in the final three days of racing to secure the overall win in the 2014 ISDE.

Enjoying a solid performance in Argentina, Loic Larrieu ended the race as the best performing junior rider. Finishing an incredible sixth in the overall standings, the Husqvarna rider was rewarded with fifth in the E2 category while guiding France to the runner-up result in the FIM Junior World Trophy category.

Delivering a top ten result in the overall individual standings, USA’s Mike Brown ended a tough edition of the ISDE in ninth. Claiming victory on the final day of competition Brown recorded a top three result in the Enduro 3 class. Helping the USA to the runner-up result in the World Trophy class ensured the 2014 ISDE was one to remember for the Husqvarna rider.

Pela Renet: “It feels fantastic to not only win the race with France but to also personally be the fastest rider in the entire event. It’s not been the easiest of ISDE races. A lot of people suffered with mechanical problems – the dust made it hard on everyone – but my bike was perfect from start to finish. Overall I didn’t have any real problems – only one or two crashes – and that was a major help in a race like this. This is my third ISDE so it’s brilliant to win the overall and cap off what’s been an incredible season of racing for me.”

Loic Larrieu: “It’s been a good week. I only took a one-minute penalty during the entire week despite the conditions being extremely difficult. Although as a team we missed out on winning the Junior World Trophy class it was nice to still finish as the fastest junior rider this week. Sixth overall and fifth in E2 is the perfect way to end my race.”

Mike Brown: “It’s been a consistent week. My focus was on putting in strong times during each test and to avoid making mistakes. I managed to do that and it showed in my results. It was fun to also go out and win the final motocross – I enjoyed that. As a nation we did have some bad luck. It cost us the chance of taking the victory but it only fuels the fire to return stronger next year.”