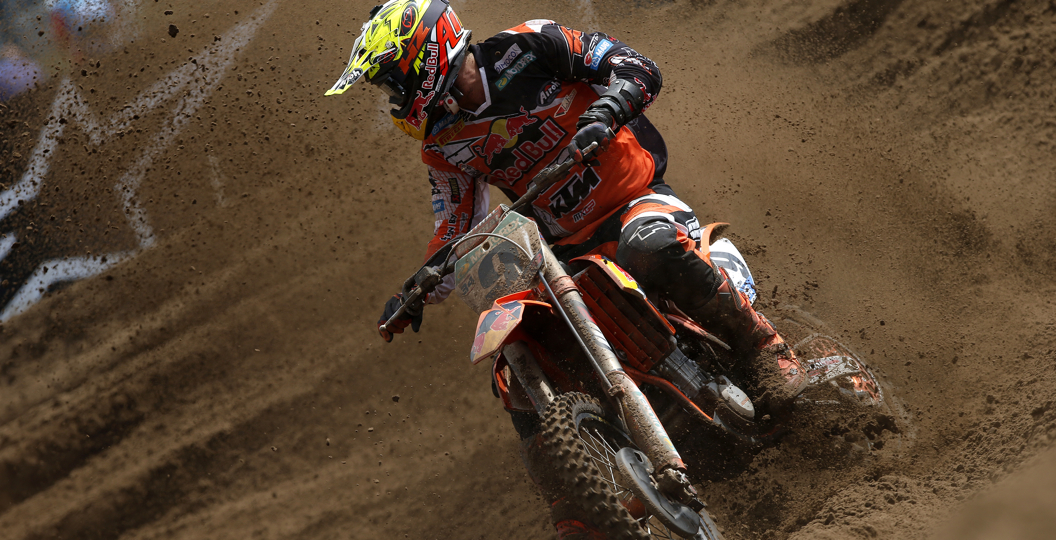 A massive storm may have broken over circuit at Lommel in the closing stages of the MXGP of Belgium on Sunday but nothing dampened the spirits of the Red Bull KTM Factory Racing Team after Tony Cairoli and Ken de Dycker picked up a 1-2 overall in the 15th round of the Motocross World Championship. British rider Shaun Simpson finished overall third to make it a clean podium sweep for the Austrian brand in the big class.

Earlier in the day MX2 Factory teammate Jordi Tixier of France delivered a 3-1 result in MX2 to take a podium second and edge further towards the points lead of injured teammate Jeffrey Herlings. The title is now guaranteed to go to one of the Red Bull KTM Factory Racing riders but it is still wide open which one will prevail.

MXGP
Tony Cairoli, a Red Bull athlete got his campaign off to a flying start with a win in the opening moto. He picked up yet another holeshot award and stormed into the lead but shortly after was passed by Kevin Strijbos. But the Belgian’s ascendency lasted only until the fifth lap when Cairoli closed him down, shot past and went on to pick up a comfortable race win. Behind him there was a fierce scrap for the minor places, including a strong bid by Simpson who vaulted into third place in the closing stages of the race. Jeremy van Horebeek, Cairoli’s closes rival for the world title finished seventh after hitting his head hard on the handlebars during the race.

Red Bull KTM’s seven-times world champion was fast out of the gates in race two and was in third place at the first corner. He had a comfortable two-second lead by the fifth lap and never really looked threatened. Then with about ten minutes left, the storm broke and riders were pelted with heavy rain but Cairoli came through to pick up his ninth GP win this season.

“It was a crazy day but I like this track,” Cairoli said. “The conditions were not perfect and I am happy that I managed to make it in the last ten minutes after I went out only with roll offs it made it hard to see in the last stages.”

It was also a great return to the podium for Ken de Dycker who has been plagued with injuries throughout the season. Perhaps more comfortable on his home track, de Dycker finished fourth in the opening moto and then when the pressure was on, pulled off a second place in race two to secure second overall.

“It was easier to ride with my injury in the sand but I didn’t expect to be on the podium. I was hoping for a top five,” de Dycker said. The race effectively wraps up de Dycker’s season as he will have another surgery on his injured hand next week and will miss the last two GPs. “I hope this will really fix the problem and I can be back next year up front where I know I can be,” he commented.

MX2
Jordi Tixier, a winner last weekend at Loket started and finished his opening moto in third, a race that was dominated by UK rider Max Anstie. Tixier, now the only rider who can challenge teammate Jeffrey Herlings for the championship went out hard and fast in his second moto and rode a decisive and winning race. The French rider succeeded in holding his nerve in the decisive second part of the race while three others behind him battled for the overall podium places. Anstie finished second and won the overall by virtue of his 1-2 result as against Tixier’s 3-1.

Tixier said he was not so confident going into the first moto because he had several small crashes in the warm-up session in the morning. “In the second race I told myself ‘now you have to do it’. I had a very good start and I pushed to the limit for the whole moto and now I got some very good points for the championship. Last week I won on hard pack and today I came second in the sand so I’ve shown everyone I can ride on all kinds of surfaces.” Tixier rides the KTM 250 SX-F.

2014 European Championship winds up at Lommel
Lommel also hosted the final and decisive rounds of the European Championship in EMX125, 250 and 300. Davy Pootjes, who last weekend secured a five-year contract with KTM Factory Racing, went into the EMX125 final round as championship points leader. But the Dutch teenager dislocated his shoulder while training on Tuesday and was unable to ride. His points were enough to give him third overall in the championship. Pootjes: “I bumped my shoulder and it came out again. I will have surgery on Friday and next year I will try to get the 250 title.”

The 250 European Championship went down to the wire and was finally decided on season race wins. KTM riders took the top five places with Steven Clarke (GBR) and Brian Bogers (NED) finishing with equal points but the title went to Clarke. KTM also secured the Manufacturer’s title in both EMX125 and EMX250.

The next round, the penultimate in the 2014 season is the MXGP of State of Golas at Trindade, Brazil on September 7, 2014. The season concludes one week later in Mexico.