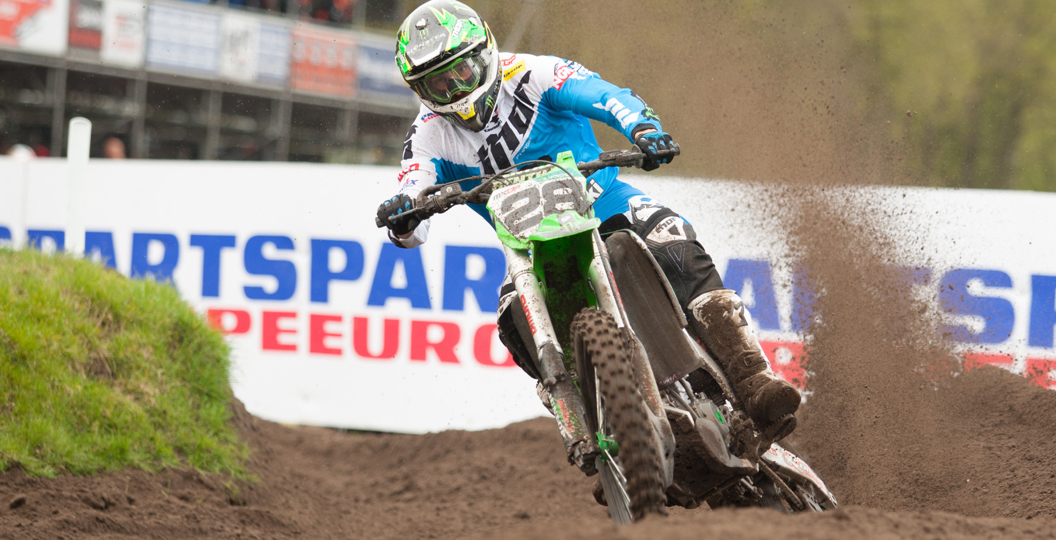 Rattray sixth in GP of Europe

Tyla Rattray upheld the honour of the Monster Energy Kawasaki Racing Team as he raced to sixth place in the GP of Europe at Valkenswaard in The Netherlands on his return from injury.

The South African had been unable to absolve his normal training regime during the week after suffering concussion at the previous weekend’s GP of Trentino, but he showed tremendous spirit and determination to finish sixth and eighth in the two motos at the sandy Eurocircuit which, after two weeks of drought, was in a rugged condition for this, the fifth round of the FIM World MXGP Motocross Championship. The unfortunate absence of team leader Ryan Villopoto, still in severe pain from injuries sustained in Italy, left Tyla alone to defend KRT honour, but he responded superbly to the challenge. A solid sixth place in the Qualifying race the previous day earns Tyla a good start gate and he used it to good effect in both races. He gated sixth in the opening moto and even moved forward temporarily to fifth mid-race before finishing sixth. He was eighth in race two from another sixth placed start, only surrendering two places as the rigours of a strenuous weekend inevitably took its toll.

Xavier Boog joined the GP regulars in one of his occasional GP appearances for Bud Racing Kawasaki Monster Energy and performed admirably on the uncharacteristic sand circuit he rarely faces in his French racing programme. Completing the first lap of the opening moto in twenty-first position Xavier advanced eight places during the race to finish thirteenth, and another strong ride saw him retain fifteenth position throughout race two.

Tyla Rattray: “I knew that it would be a tough weekend coming here, as I crashed last weekend and didn’t raced in Arco. I was not able to do my normal training this week, but I’m happy to get a sixth overall here in Valkenswaard. It was a tough weekend; the track was really rough with so many classes on the programme and it was very bumpy. The team has been working hard again this week, and we’ll keep pushing forward before Spain. The team put a lot of work in and the injury of Ryan was bad news for us, but that’s racing. But we will keep working; we’ve got one weekend off and we’ll go practicing on hard pack to prepare for Talavera.”

Xavier Boog: “I knew before coming here that it would be difficult on this track, but I did my best to finish both races in the top fifteen. It was a better weekend than Italy, even if I qualified too far back to have a good gate on the grid. The track was really rough, with many bumps, and for sure Talavera in two weeks time will suit me better. But before we go there I will defend my red plate in the penultimate round of the French Elite Championship at Plomion next weekend.“