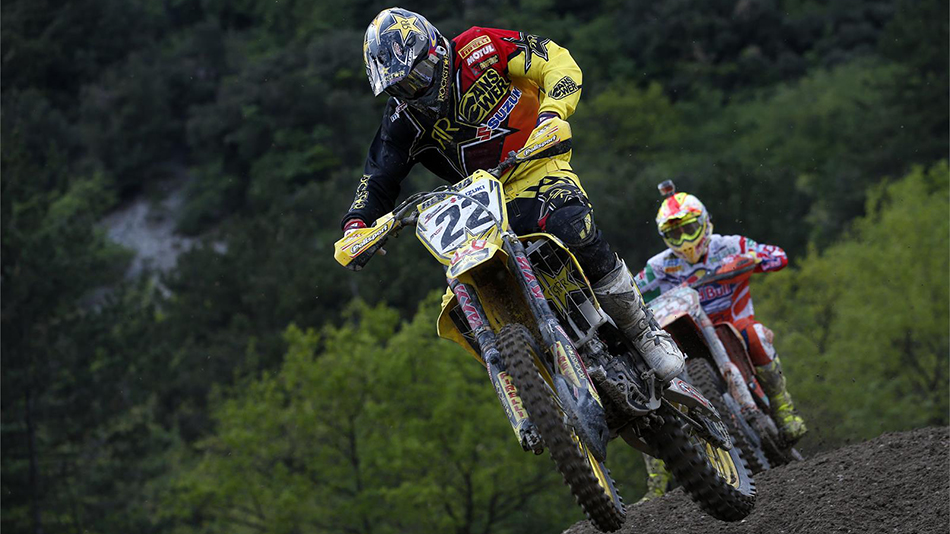 Under the Radar: GP of Trentino

Kevin Strijbos (MXGP): I have not necessarily featured Kevin Strijbos in this column because of the third place finish that he acquired at the recent GP of Trentino, but more so because of the speed that he has showcased thus far. Although the results have not really materialised as expected, at each round he has been very fast. In fact, he has managed to win two of the qualifying races that have been run this year. So, he has the speed, ability and confidence needed to seal the deal and win a race – it just has not been the one that counts, yet.

Despite this, Kevin had just one top five race finish prior to Arco di Trento, which has led most to overlook, and ignore, his undeniable speed. Strijbos sustained an injury in the winter months, which kept him off of the bike for a handful of weeks, so that hampered his preparation in the lead-up to the new season. Although the time off wouldn’t be a huge factor, he did make a few comments at the first couple of rounds that he just needed some more race time.

So, I lean to that for the reason why he made such a clear improvement at Arco di Trento. The most recent GP was also the first time that Kevin [and his teammate, Clement Desalle] have had a 2014 Suzuki beneath them. Now, prior to round four I would not have subscribed to the theory that this would drastically help their riders. But, both guys had their best results of the 2014 season at GP of Trentino, and this seems to be the missing piece of the puzzle. The Belgian was fast enough to hang with the lead pack at the scenic venue, which certainly makes for some positive momentum moving forward.

Would I be shocked if Strijbos goes on to win a moto at some point this year? No, I would not. The likeable Belgian was a factor in the race for the lead a couple of times last year, and now that he has an overall podium under his belt this year, I would think that he wants more!

Xavier Boog (MXGP): You have to realign your expectations of certain riders as time progresses, as certain results are no longer feasible. In the past, Xavier Boog has been a podium contender in the premier division, and that speed is surely still there. However, some injuries in recent years mean that Xavier has not progressed as much as some other riders. So, nowadays,  I would say that consistent top ten finishes are a good goal for the 24MX Honda rider, and if he can do that, it would give him something to build off of later in the year.

Well, Boog has done that so far, as he has been right around the top ten since round one. Although he missed it both times in Brazil, he was twelfth each time, which is not bad – the field is stacked early on. At the GP of Trentino, Xavier was again right in the mix, as he finished tenth each time. In my opinion, he is more than capable of finishing higher up than this, as [Davide] Guarneri was in front of him, and I was say Boog has a higher glass ceiling than the Italian.

Alessandro Lupino (MXGP): Honestly, I was worried when it was announced that Alessandro Lupino was moving up to the MXGP class, as I feared that he would get lost in the premier division, like Davide Guarneri has a little bit. Now, you could argue that this has happened. His move to MXGP should have been a popular talking point, but it was overlooked at Arco di Trento, as the excitement at the front hogged the headline. This is quite unfortunate for Lupino, as he actually had a strong ride in his debut.

Remarkably, Lupino finished eighth (!) in moto two after starting down in nineteenth. Now, I’m shocked by this, as I did not see that coming at all. Where would he be with a start? Well, we can only guess now, but you would have to think that he will become a consistent top ten rider soon enough. Lupino was one of the smoother riders in the MX2 class, so maybe the 450f does suit his style a little better? In race one, Alessandro would have finished fourteenth, but a fall on the last lap hampered him, unfortunately.

Evidently, the consistency needs working on, still – that has always been an issue for him. But, perhaps the Italian could make a name for himself in the MXGP class? [Update: Unfortunately, Alessandro sustained a knee injury earlier this week, and damaged his ACL and collateral ligament. However, he will attempt to ride this weekend].