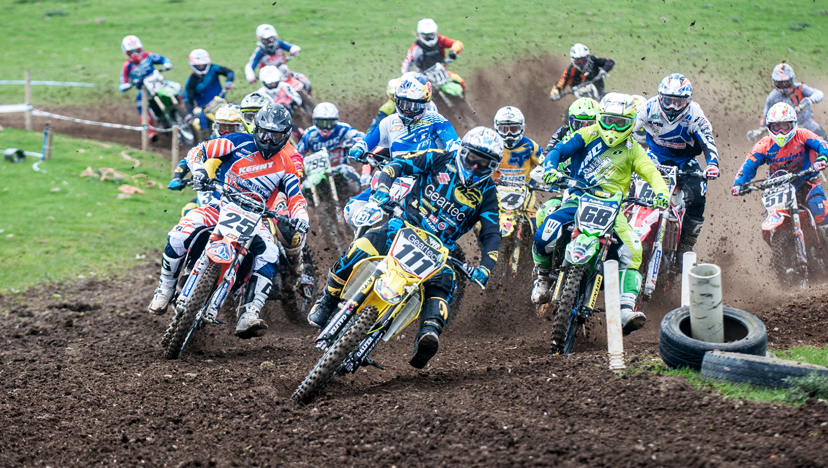 The spectacular, scenic venue of Whitby hosted the third round of the 2014 MX Nationals this past weekend, under sunny skies. For the first time, the series visited a hard-pack venue, which certainly altered the results slightly – there were some new winners in both MX1 and MX2.

Yep, that’s right, the two pro classes were split for the first time, which left most fans, riders and teams elated. It was the best decision, clearly! The change in format also opened the door for Graeme Irwin to compete in both MX1 and MX2 on the same weekend, which was a popular talking point.

Surprisingly, Graeme won the first MX2 moto, after fighting with most of the title contenders. Neville Bradshaw actually took the holeshot, but he was quickly passed by Lewis Trickett. Behind the leading duo, Irwin, Bryan Mackenzie and Jason Dougan were right there, and attempting to get in on the battle for the win. Trickett looked calm and collected at the front, despite the fact that he has not led many races at this level. The MBO Sport Yamaha rider led until lap seven, when Irwin came storming through (after disposing of Neville two laps earlier).

In the closing stages, Lewis lost two more spots when Bradshaw and Mackenzie got around him, and onto the final two steps of the podium. Graeme won this one by four seconds, from Mackenzie, Bradshaw, Trickett, Steven Lenoir (who got caught up in an incident on the first lap ), Adam Sterry, Lewis Tombs, Jason Dougan, Rob Davidson and Jordan Booker.

In the second MX2 moto on the Sunday, Jordan Booker took an impressive holeshot on his privateer KTM, but Steven Lenoir was soon nipping at his heels. In fact, the Dantec Husqvarna UK rider was into the lead by lap two; it was his race to lose from that point onwards. Booker was shuffled back in the opening couple of laps, as Sterry and Trickett moved into second and third. Neville Bradshaw was comfortably inside of the top five, but he dropped out of the race on lap seven and lost a lot of points.

After starting on the verge of the top ten, Graeme Irwin pushed forward all-race long, until he eventually got around Sterry (and into second) with three laps remaining. However, by that time, Lenoir had stretched out enough for a gap that he had the race under the control, so he took a commanding win by five seconds from Irwin, Sterry, Booker, Mackenzie, Trickett, Tombs, Dougan, Divall and Waterman.

The third and final MX2 moto was quite similar, as Jordan Booker took another holeshot, but lost the lead within a lap, as Lewis Trickett slipped through. Lewis was seemingly eager to take his first MX2 moto win, as he desperately attempted to establish a gap of some kind. The MBO Sport Yamaha rider led for half of the race, before Lenoir snuck through. Lewis still stuck to the back wheel of the Frenchman, but he came up just short in the end, as Lenoir won by two seconds.

Bradshaw finished third in the moto, after making a pass on Mackenzie in the closing stages. Sterry eventually finished fifth from Dougan, Tombs, Booker, Davidson and Divall. Lenoir took the overall victory; Mackenzie and Trickett rounded out the overall podium. Despite the fact that he had a DNF in moto two, Bradshaw still holds the series lead by one measly point.

In MX1, Brad Anderson took the first race holeshot on the Saturday, with Jamie Law and Gary Gibson right behind him. Kristian Whatley quickly moved into third, and was all over Law. On lap three Kristian got into second, but it took him six laps to take the lead and around Brad. With three laps to go, Irwin moved into second, and immediately tried to make up some ground on the leader, but it was not to be.

The last few laps weren’t kind to Anderson, as the series leader, Nathan Watson, got around him with two laps to go to finish third. Behind the top four, Law held on for fifth, and he was followed by Steven Clarke, Gert Krestinov, Ross Rutherford, Priit Ratsep and Tony Craig.

In the second MX1 moto, Ray Rowson grabbed the holeshot, surprisingly. But, Brad Anderson quickly took the lead, from Law and Whatley. Nathan Watson latched onto the back of this group early on, too. Law actually looked very comfortable up front; he kept Whatley and Watson at bay for nine laps! With two laps to go, Watson jumped passed Whatley, and secured second in the moto. However, he couldn’t catch Anderson – Brad took the win by two seconds. Nathan Watson held onto second, from Whatley, Irwin, Law, Clarke, Shane Carless, Ratsep, Craig and Ross Rutherford.

Brad Anderson had another great start in the third and final MX1 moto, but Nathan Watson was right with him from the start in this one. On the third lap, Watson actually held the lead, but Brad counteracted, and took control of the race again.  After this, Anderson actually established a small cushion, as Nathan started to make some mistakes, which allowed Whatley (who had disposed of Irwin) to close in as the race progressed. With three laps to go, Watson didn’t do a double, which allowed Kristian to make a relatively easy pass, and secure second.

But, at the front, Brad Anderson secured another moto win, and the overall win; he really was the best rider all weekend. Kristian Whatley and Nathan Watson finished second and third in the moto, and the overall classification. Irwin was fourth in race three, from Krestinov (who had a disastrous weekend), Law, Clarke, Craig, Ratsep and Carless. Nathan still has a comfortable cushion in the series standings, as he is the only rider that has finished on the overall podium at all three rounds.