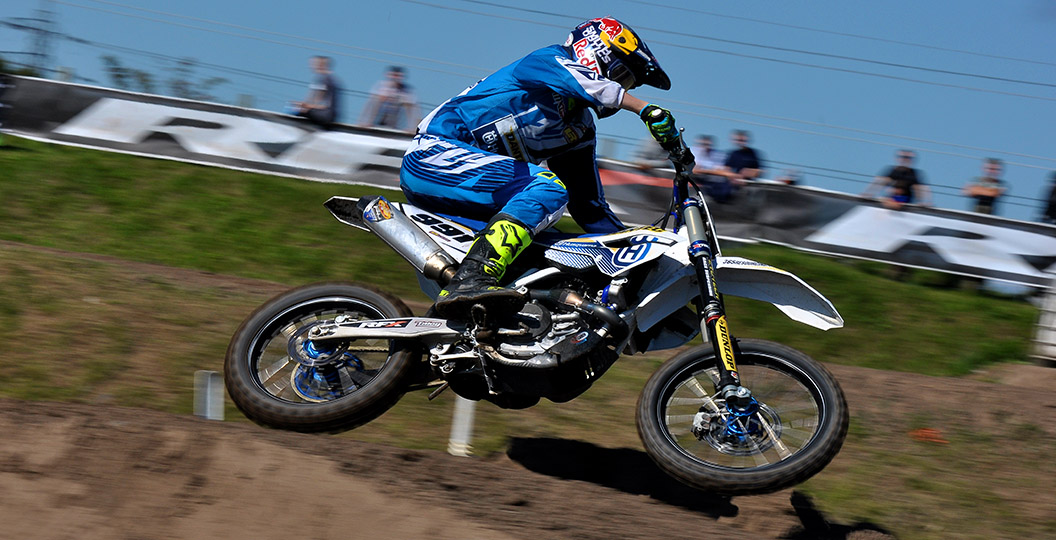 The MX Nationals season moved forward this past weekend, as the penultimate round of the inaugural series took place at Preston Docks. Following a mishap involving the medics on the Saturday (more on that fiasco tomorrow), there was non-stop action on day two with an abundance of great racing. There were just two MX1 and MX2 motos at round seven, because of that issue.

Adam Sterry took the early lead in the first MX2 encounter, on a track that he is very familiar with, with Michael Eccles in tow. Ben Watson was the man on the move early on after starting on the cusp of the top five, as he moved around Neville Bradshaw and into third. Ben would also find a way around Michael before the conclusion of the moto. Steven Lenoir past the two title contenders and moved into third at the halfway point, although a mechanical failure knocked him out of the running with just a couple of laps remaining.

It was a fairly uneventful race for Sterry, as he simply checked out at the head of the field whilst on his way to the win. Ben Watson was a distant second, although he showed a good pace with Eccles three seconds further back in third. It is certainly a sign of things to come to see these three on the box. Neville edged out his title rival Bryan Mackenzie for fourth, although the gap was still miniscule at this point.

The second MX2 race was action-packed, once again. Although the MX Nationals have encountered a lot of issues this year, you cannot deny that the racing has been top-notch. Ben Watson took the early lead with Neville Bradshaw in tow. Meanwhile Lenoir was working his way up from fifth on lap one; he eventually took the runner-up spot on lap seven and started putting pressure on Ben.

After exchanging the lead multiple times, Steven made a move stick. However, Watson sliced up the inside a lap later and took Lenoir out, as a result. Consequently the Frenchman was unable to continue, due to a few mechanical issues. Behind them Bradshaw and Mackenzie were battling it out for second. However, Bryan crashed hard on the final lap and could only salvage a thirteenth as a result. Watson took the win by seven seconds from Bradshaw, Sterry (who had a torrid start), Lewis Tombs, Carlton Husband, Michael Eccles, Matt Burrows, Nathan Dixon, Jake Millward and Rob Davidson. Ben also took the overall from Sterry and Bradshaw.

When someone returns from a serious concussion, most expect it to take some time for the rider in question to get back up to speed. However, Irwin dispelled that theory, as he returned to action in the opening MX1 moto and took a clear victory! The Irishman took the holeshot, with Kristian Whatley and Elliott Banks-Browne in tow early on. Nathan Watson, the series leader, had another mediocre start (that is quickly becoming his kryptonite) although cut through the pack and into the top five within four laps.

Watson eventually past his title rival, Kristian Whatley, for second. Although Irwin had too much of an advantage at the front by that point, by taking second Nathan still garnered a lot of momentum and bragging rights, something that will prove to be pivotal at this stage. Whatley held on for third, with Banks-Browne, Martin Barr (after a first turn fall), Ashley Wilde, Jamie Law, Shane Carless, John Adamson and Rob Clitheroe rounding out the top ten.

Following his strong ride through the field in race one, it was hardly surprising to see Nathan Watson dominate after taking the lead in race two. Although first moto winner Graeme Irwin moved into second early on, he was no match for the Dantec Husqvarna UK rider this time out. Gert Krestinov and Brad Anderson were the men on the move, as they moved up from ninth and tenth on lap one to second and third at the finish. Irwin held on for fourth, with Kristian Whatley a disappointing fifth – he lost some crucial points in the title chase. Nathan took the overall win; Irwin and Whatley joined him up on the box.