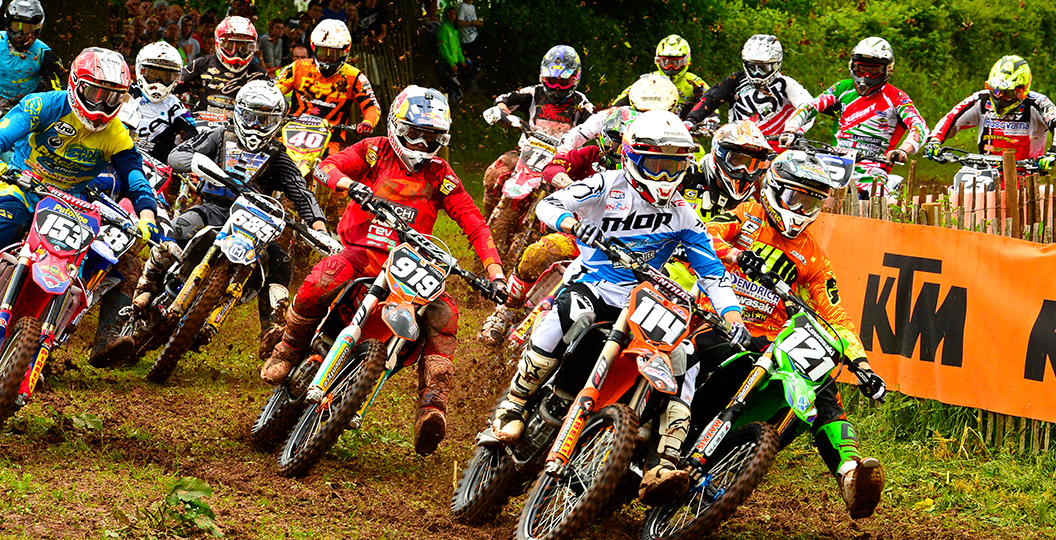 We are at the halfway point, folks! The fourth round of the MX Nationals was held at the very technical Pontrilas circuit, as some rain in the week leading up to the event left the riders with a demanding track. However, this did not change the results too much, as the same protagonists were at the front of the field.

Bryan Mackenzie took the early lead in the first MX2 encounter, with Adam Sterry, Steven Lenoir and Neville Bradshaw in tow. Ben Watson also joined this main cluster of frontrunners, after starting on the cusp of the top ten. Some guys shuffled around in the early stages, as you would expect – most notably Lenoir moved into second, and started to close in on Bryan. However, after a couple of laps Adam moved back into the runner up spot, and at around the same time Watson moved up into fourth. Sterry also moved into the lead soon after this – it was as if he just flicked a switch!

In the latter stages Lenoir and Mackenzie came together, unfortunately, which caused them to lose a few positions – Ben Watson also got caught up momentarily. But Adam Sterry was not effected by any of this, as he had a twelve second lead when he clinched the win. Bradshaw captured second and was followed by Watson, Tombs, Booker, Thornhill, Harrison, Dixon, Waterman and Burrows in tenth. Lenoir salvaged an eleventh, with Mackenzie buried down in nineteenth.

Adam Sterry was again dominant in the second MX2 moto, as he led from start to finish. Bryan Mackenzie, Jason Dougan and Jordan Booker followed him through on lap one. Neville Bradshaw and Ben Watson were the men on the move early on, as they jumped into third and fourth after mediocre starts. Watson eventually got around Bradshaw, and then took second; he finished twelve seconds down on Sterry at the finish, but he did have the fastest lap of the race. Lenoir was strong in third, he obtained the position after starting in tenth. Mackenzie, Bradshaw, Booker, Thornhill, Waterman, Tombs and Burrows rounded out the top ten.

Unfortunately, the last race was not as kind to Adam Sterry, as his chain came off and smashed the casings, which resulted in a DNF. With Sterry out, the door was open for Watson to claim the final race win, as he took the lead early on. In the end, he claimed the win by eight seconds over Lenoir, who started up front and stayed there. Ben clinched the MX2 overall win too, which is hardly surprising when you consider his recent good form.

Bryan Mackenzie ended this moto in third, but lost some ground in the points standings, followed by Bradshaw, Tombs, Dougan, Booker, Davidson, Thornhill and Burrows. Neville Bradshaw (second) and Steven Lenoir (third) joined Watson up on the overall podium.

Nathan Watson had a forty-two point lead in the MX1 class heading into the round, so his competitors needed to chip into his gap. Kristian Whatley seemed set to do just that, as he took the early lead in race one, with the Buildbase Honda duo of Brad Anderson and Nathan Parker nipping at his heels. Whilst Whatley ran away with the lead, Graeme Irwin was moving through the field and into the runner up spot. Nathan Watson was also making steady progress, after crashing on lap one.

Watson was the man to watch in the closing stages, as he continuously closed in on Anderson for third place. The Dantec Husqvarna UK rider actually had the quickest lap of the race – it was four seconds faster than anyone else, which really is  incredible. But, he came up just short of a podium spot. It was Kristian Whatley who took the victory in moto one; he had a twenty-one second cushion over Irwin. Anderson finished in third, followed by Watson, Krestinov, Law, Carless, Parker, Ratsep, Wilde.

Brad Anderson appeared to be in control of the second MX2 moto, as he held the lead for the first five laps. Shane Carless then stole it from him – he went from third to first within a lap, whilst Whatley slipped from second to twelfth, because of a fall. Carless led the race for the next seven laps, however, Nathan Watson stormed through in the closing stages. Nathan started eighth, and slowly chipped his way through the field (after another small fall) until he eventually claimed the win. Shane held on for second from Anderson, Krestinov, Wilde, Parker, Law, Irwin, Whatley and Steven Clarke.

Following a lacklustre result in moto two, Kristian Whatley was back on top form in the final encounter, as he took the early look and was unchallenged. Nathan Watson finally had a better start in this one, but he lost touch with Kristian. Carless also had another good start, as he occupied third for a majority of the race – the top three were stagnant in this one. Gert Krestinov moved forward after starting in seventh; he eventually captured fourth, just ahead of Ashley Wilde, who had a brilliant day.

Law finished sixth, ahead of Irwin, Anderson, Parker and Ratsep. Nathan Watson took the MX1 overall win, and extended his lead in the standings. It was a historic day, as both Watson brothers won their respective classes! Whatley ended up in second overall, with Carless in third.