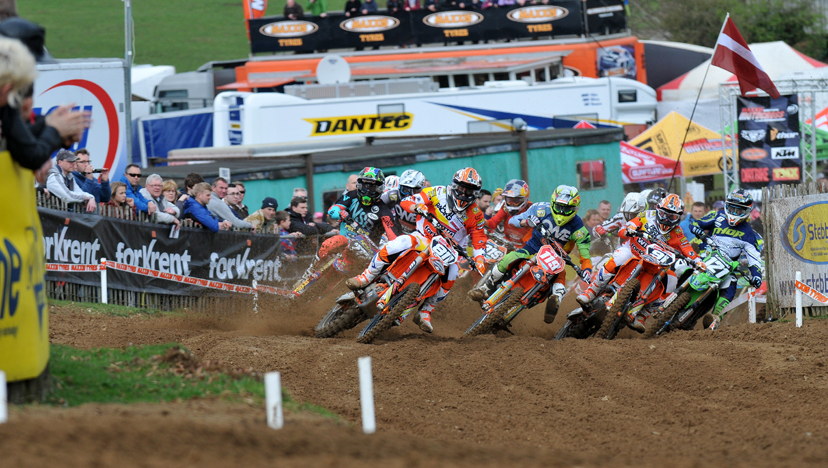 The historic track of Lyng, in Norfolk, played host to the second round of the 2014 Maxxis British Championship this past weekend. Like they have done a lot recently, the surprises kept on coming on the sandy track, as some riders thrived on the rough circuit.

It is hard to argue with the fact that Matiss Karro is the fastest rider in the MX2 class, but that does not mean that you can assume that he will take the win – the first two rounds have been a testament to that. In MX2 race one, Adam Sterry took a commanding holeshot aboard his Wilvo Forkrent KTM, with Mel Pocock and Matiss Karro giving chase. The Latvian tried to move forward a little too quickly, as he went over the bars at the end of lap one, and dropped back to the edge of the top twenty. Up front, Sterry and Pocock were left to battle it out, which they did. However, Mel kept dropping back a little bit, and then making the time up again.

Meanwhile, Karro moved forward a respectable amount on a track that was very tough to pass on; he ended up finishing ninth, after grabbing a couple of spots on the last lap. His teammate, Sterry, saw off the challenge from Pocock at the head of the field, and eventually grabbed the first Maxxis British Championship race victory of his career by seven seconds from the championship leader. Neville Bradshaw took third following a strong ride, from Bryan Mackenzie, James Cottrell (who  looked great all race), Steven Clarke, Lewis Tombs, Lewis Trickett, Matiss Karro and Ben Watson in tenth. Unfortunately, Martin Barr did not finish this one, as his shoulder popped out halfway through – he did not return for the rest of the day.

In the second MX2 moto, Adam Sterry took another holeshot, and looked set to repeat his success from race one, as he stretched his advantage at the front immediately. Again, Pocock and Karro followed him through on lap one. The race was far from perfect for Adam this time around, as a small issue early on demoted him to third. Following this, Pocock led Karro, but his lead was short-lived, as Karro got around him with two laps to go. Neville Bradshaw ended third again, with Ben Watson fourth, Adam Sterry dropped to fifth eventually, ahead of James Dunn, Bryan Mackenzie, Michael Eccles, James Cottrell and Lewis Tombs.

Mel Pocock took the early lead in the third and final MX2 encounter, and with Matiss Karro on the cusp of the top five, he looked set to claim his first moto win of the season. But, Matiss swiftly moved forward, and was nipping at Pocock’s heels (along with Bradshaw) soon enough. Meanwhile, Sterry and Ben Watson were lurking in fourth and fifth; both riders were very strong, again. Eventually, Karro pulled the pin, took the lead from Pocock, and immediately established a gap. Soon after this, Pocock lost a spot to Bradshaw, too. With just a couple of laps remaining, it all started to change, as Sterry fell to sixth, and Mackenzie moved around Watson for fourth.

However, in the end, Matiss Karro took the win (his fourth moto victory this year) from Neville Bradshaw, Mel Pocock, Bryan Mackenzie, Ben Watson, Adam Sterry, Lewis Tombs, James Cottrell, Steven Clarke and Lewis Trickett. Overall, Mel took another overall victory, despite the fact that a race win still alludes him; Karro and Bradshaw rounded out the overall podium. Pocock now leads the championship by a measly two points over his Latvian rival.

In the first MX1 moto, Nathan Watson claimed the holeshot, whilst Kristian Whatley, Shaun Simpson and Jake Nicholls gave chase. The lead was short-lived for Nathan though, as Nicholls was into the lead following lap one. Strangely, Shaun lost a bit of ground on the first lap, as he dropped to seventh. However, he was soon back in the battle at the front. By lap six, the series leader was around Watson, and into second. Although it seemed unlikely at first, he started to cut into Nicholls’ lead considerably, until he eventually got around Jake with two laps to go. But, the Wilvo Forkrent KTM rider had to slow up, as he had some kind of chain malfunction, where it kept jumping off of the sprocket.

Shaun did stay on to claim the moto win from Jake, who salvaged a second. Kristian Whatley was a distant third, followed by Elliott Banks-Browne, Gert Krestinov, Alex Snow, Matt Moffat, Brad Anderson, Graeme Irwin and Tony Craig. Nathan Watson dropped out of the moto with three laps remaining, due to a rear wheel issue, it seems.

Nathan Watson was looking for redemption in moto two, as he again claimed the holeshot. However, his lead was again short-lived, as Nicholls and Simpson came storming by early on. Whilst the top two were going at it at the front, the rest of the field was quite spread out – not much went on. Further down the field. Kristian Whatley started the race on the cusp of the top ten, and did not move forward too much; he finished in a lowly ninth. Eventually, Jake Nicholls took the victory by a measly two seconds, followed by Shaun Simpson, Nathan Watson, Priit Rätsep, Elliott Banks-Browne, Brad Anderson, Graeme Irwin, Gert Krestinov, Kristian Whatley and Alex Snow.

In the final MX1 race, Graeme Irwin stole the holeshot from Shaun Simpson, Kristian Whatley and Nathan Watson. But, Simpson quickly moved into the lead, with established a small gap. Meanwhile, Jake Nicholls started sixth, and struggled to make up too much ground early on. Following a few laps, Nathan was into second, and seemed to be running a similar pace to the leader. It all changed five laps from the end, as Simpson had a slow fall in a turn, and gave up the lead. Nathan Watson then rode on to an unchallenged moto win, from Shaun Simpson, Jake Nicholls, Graeme Irwin, Kristian Whatley, Gert Krestinov, Brad Anderson, Priit Rätsep, Elliott Banks-Browne and Jamie Law.

In the overall classification, Shaun Simpson took another overall win, ahead of Jake Nicholls, and Kristian Whatley in third. Shaun now leads the MX1 series by five points over Jake, following just two rounds. Whatley will have to start chipping away at the gap that these two have over him, as he lost a considerable amount of points at Lyng.

In the MXY2 class, Jason Meara took a commanding double moto victory; he was simply dominant all day long. Josh Gilbert took a strong second, following a third and a second in the two motos. Ollie Osmaston was third overall; he had a fourth (although a puncture hindered him in that one) and a third on the day.