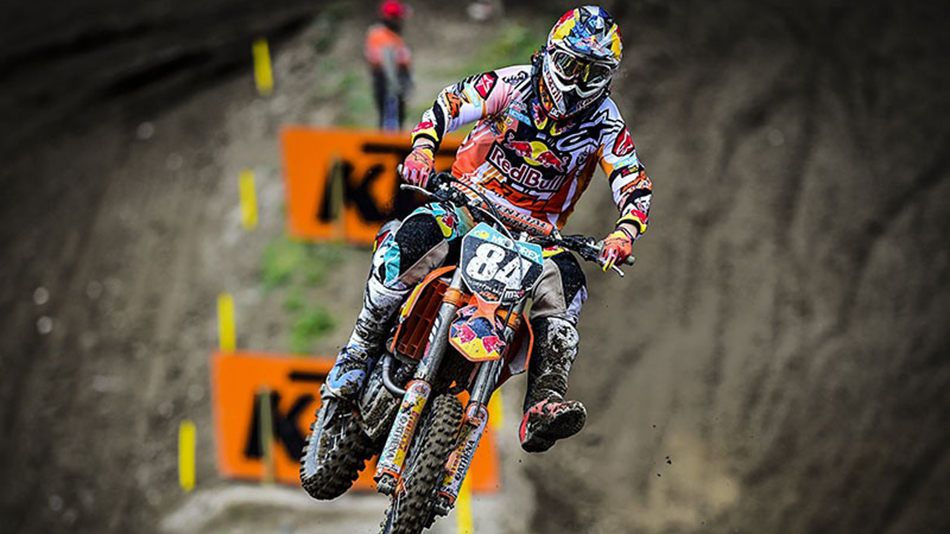 ARCO DI TRENTO (Italy), 13 April 2014 – With thousands of passionate motocross fans swarming the spectator zones here in Arco di Trento, the electricity of round four of the FIM Motocross World Championship was almost as exceptional as the intensity of the racing. Boisterous Italians waved their flags and made as much noise as possible as a sign of admiration for the athletes of MXGP’s series withRockstar Energy Suzuki World’s Clement Desalle and Red Bull KTM Factory Racing’s Jeffrey Herlings both claiming victories in their respective categories

It was a fantastic day for Rockstar Energy Suzuki World with both Belgian riders Clement Desalle andKevin Strijbos finally banking scores that have been a long time coming. One of the biggest MXGP title challengers Clement Desalle got the race win he’s been aiming for since the start of the season, which combined with his second place finish in moto one, landed him on top of the box. Meanwhile his teammate Kevin Strijbos rounded off the podium in third with a fifth in race one and a third in race two to make the podium a complete Belgian affair.

Fellow Belgian Yamaha Factory Racing’s Jeremy Van Horebeek has quickly become a podium regular and genuine challenger for the title this year. Despite having a few hairy moments, dodging a bullet when Team HRC’s Evgeny Bobryshev went down on a jump right in front of him, the Belgian didn’t slow down pushing right to the checkers to finish second overall.

Team HRC’s Max Nagl is proving to be that fourth place guy. While a podium would look much better on paper, Nagl is an MXGP veteran and knows first hand, consistency pays off in the long run.

Although the weekend didn’t go to plan for the seven-time FIM Motocross World Champion Antonio Cairoli as he ended the day in fifth overall, the Italian was definitely a winner in the eyes of the public as they lead him around every lap of the track with a massive roaring Mexican Wave. When asked how he felt about the weekend the Red Bull KTM Factory Racing rider responded “I made too many mistakes myself, I was last on the start in race one and then in race two I crashed, then I got going again and found my lines and my rhythm and then I fell down again. For sure I wanted to win, but it’s not always possible. Anyway, it’s OK, I know the championship is long and fifth is still OK for the championship”.

Monster Energy Kawasaki Racing Team’s Gautier Paulin was fired up in race one. After only qualifying eighth yesterday, the Frenchman’s choice of gate was taken by riders that qualified in front of him twice before the start of the race. Clearly it added to his determination as he hauled out of the gate to take his third consecutive Fox Holeshot and then went on to lead the race from start to finish for his second race win of the season. Meanwhile in race two, it appeared to be a repeat performance as he took yet another holeshot. After stretching out a gap of three seconds only three laps in, bad luck struck and a technical problem with his bike forced him out of the race. Nonetheless, he still finished sixth overall for the day.

Unfortunately in MXGP race one, yesterday’s top qualifier Monster Energy Kawasaki Racing Team’s Steven Frossard came together with team mate Gautier Paulin in a battle for the lead on race one, which resulted in Frossard going down hard. The Frenchman had a concussion and was attended to by the excellent medical crew and then taken to hospital for further examination. Youthstream wishes Steven a fast and full recovery and looks forward to seeing back on the track soon.

While many of the Italian fans missed seeing CLS Kawasaki Monster Energy’s Alessandro Lupino in the MX2 as he made the jump to MXGP this weekend, they were still proud of efforts with his MXGP debut resulting in twelfth overall. Meanwhile fellow Italian TM Ricci Racing’s Davide Guarneri also kept the fans happy with a steady ninth in total.

Red Bull KTM Factory Racing’s Jeffrey Herlings had to use every piece of real estate on the circuit of Arco di Trento today as he battled his way forward from two very average starts to take a win in race one and a second in race two for the MX2 Grand Prix of Trentino overall. In the press conference Jeffrey said, “my speed is not good but my fitness is good, I’m just missing hours on the bike, I’m not feeling good at all which gives the other guys a bit of a chance, but I will still come back strong.”

Team CLS Kawasaki Monster Energy’s Arnaud Tonus put in a strong effort today in Arco with a second in race one and a third in race two after banging bars with arch rival Red Bull KTM Factory Racing’s Jeffrey Herlings. The combination of a 2 – 3 result left Tonus second overall for the day which was enough to hold on to the red plate with a lead of six points over Glenn Coldenhoff.

Meanwhile Rockstar Energy Suzuki Europe’s Glenn Coldenhoff proved he is a solid contender for this title when he got off to a great start and put the pass on a super confident Valentin Guillod to take over the lead. Although he only got eighth in race one thanks to a bad start in which he agreed “I got a bad start and I just couldn’t find good lines to make passes”, the Dutchman bounced back in the second race for his second victory of the year. His combined 8 – 1 result left him in third overall for the day.

There must be something in the water in Switzerland with Standing Construct KTM’s Valentin Guillodbeing the second Swiss rider inside the top five. After taking pole position in qualifying yesterday, Guillod lined up today and ripped two Fox holeshots. The young Swiss who was last year’s European EMX250 champion then went on to lead laps in both races, with a fall in race one hindering what could have been his first podium finish of the year. Nevertheless, Guillod bounced back in race one to take fourth and backed that up with another fourth in race two for fourth overall.

Rounding out the top five Wilvo Nestaan Husqvarna Factory Racing’s Romain Febvre is still continuing to move forward. With a seventh in race one and a fifth in race two Febvre rounded finished fifth and moved up to fourth in the MX2 championship overall.