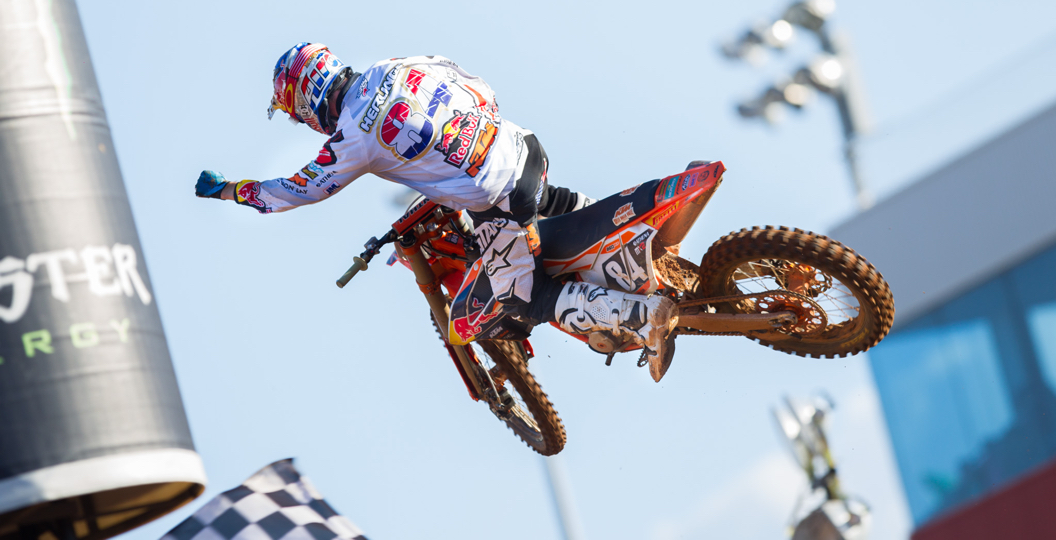 We understand that a lot of you are probably out and about, rather than glued to your television and watching every second of each moto. That is why we debuted this new-look race report, to help if you are in that situation. We’ll post the full results here, following each MXGP and MX2 moto at the GP of Americas, and a handful of points that cover everything you need to know. Simple, right?

We were set for a great show in this one right from the beginning, despite the fact that one of the contenders crashed out entering turn two. Adam Cianciarulo was duking it out for the lead, tucked the front end and then didn’t rejoin the race. Austin Forkner led for quite some time, nine laps, before tipping over and giving way to Cooper Webb. Webb bobbled whilst getting around Forkner, however, which allowed Jeffrey Herlings to take the lead and, from that point, he never looked back. Herlings also did enough to clinch the 2016 MX2 title!

Justin Barcia took the holeshot in this one, but Eli Tomac disposed of him within minutes. Tomac was unstoppable in this one, as he consistently posted times that were more than a second quicker than his competition. Barcia held on for second, but was dealing with heat from Jeremy Van Horebeek, Tim Gajser and Glenn Coldenhoff for the duration. Coldenhoff gave way to a hard-charging Clement Desalle right at the end. Tim Gajser claimed the 2016 MXGP title following this!

This one was arguably the best race of the season! Austin Forkner took the early lead and sprinted away, so it seemed that he was going to take the win that he just missed out on in moto one. Jeffrey Herlings was second through a lot of that time and didn’t really make much progress. Cooper Webb, who started outside of the top fifteen, was coming though and eventually got around Herlings, before hunting Forkner down and making a pass with five laps left to run. Herlings almost got Forkner right at the end too, but just couldn’t make it happen.

Tim Gajser took the early lead in this one, whilst Eli Tomac worked his way forward from the cusp of the top five. A mistake eventually cost Gajser the lead and shot at the win, so Tomac was free to sprint away with it at that point.