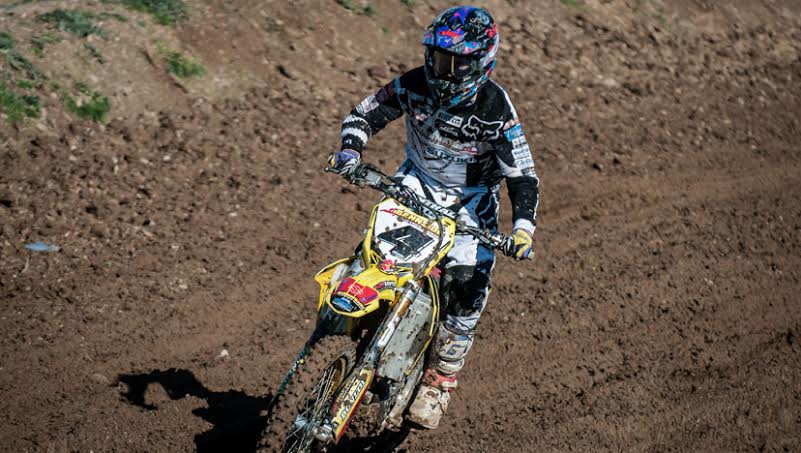 A quick chat with: Gary Gibson

In 2013 Gary Gibson won both the Irish and Ulster motocross titles and really established himself as the man to beat in Ireland, he even got to represent Ireland at the MXDN in Germany.

But in England Gibson wasn’t getting the results he knew he was capable of. He knew he could run inside the top ten from British Championship races at Desertmartin but doing it across the water was proving more difficult.

While Gibson could race with Stuart Edmonds at home in Ireland,  in England Edmonds was in the top ten while Gibson was trying to just get some points.

But this year Gibson has switched his main focus from Ireland to the British championship and already that decision is paying dividends. Gibson ran top ten for the majority of the first two motos at Landrake to finish 11th and 12th for 16th overall and his best performance across the water.

Gibson came home to race the prestigious John Donnelly memorial event and won it for the third year in row but only after a day-long duel with rival Edmonds.

We caught up with Gibson after his win to talk about the day and his performance at Landrake a couple of weeks prior.

MX Vice: Three John Donnelly’s in a row, that’s a pretty good record to have!

Gary Gibson: Well I hadn’t really been thinking about racing too much at home this year but I thought why not and I would just like to thank P&O for sponsoring the event. It has been a good event the past three or four years they have been sponsoring it. I have managed to get free boat trips out of it three years in  row so that helps us getting across the water to England.

MX Vice: The first race was tough you were getting close to Edmonds and then went down.

Gary Gibson: Yeah it was a bit slippy in qualifying and I made few adjustments to the bike and got it steering a bit better. I got a bad jump in the first race, I think I was about fifth in the first corner then got up behind Edmonds quickly but he started pulling away. I was making a couple of mistakes and couldn’t get into a rhythm. Then I started creeping back up on him I seen the gap was down to 1.5 seconds  then I was going for the lead and she just spun out on me so I just picked myself up and got second and kept my head up for the next two.

MX Vice: The second two races you were leading, you had pressure but were very precise in the ruts and didn’t really make mistakes.

Gary Gibson: That was the key just to get two holeshots and keep clear vision. I got two good jumps  and was first into the first corner and that was the main objective.  I pulled in a bit of a lead I think Wayne was second in the last one for a while and that gave me a chance to make a break on Edmonds. I took it a bit easier and saw him creeping up on me but I knew with two laps to go I could maintain the speed and get the win.

MX Vice: The closest you came to crashing in race three was your wheelie after the race!

Gary Gibson: Yeah I got a bit overwhelmed there and did a goon wheelie up the hill and near lost it!

MX Vice: Just going back to the British at Landrake, it was the first time you were able to show your speed from home in England. It must have felt good to be running inside the top ten for most of the first two races.

Gary Gibson: Don’t get me wrong it felt good and everyone has been congratulating me. But I know it is probably a big step from last year but I was hoping for better. Top ten is my goal and until I finish there I am not going to be happy but I suppose I have upped it. I know what I am doing is working so now that I know I can up it and do it with a bit more intensity there is no reason why I can’t be there. I’m just looking forward to Lyng hopefully I can get a good qualifying and get a good gate pick and get away again, the starts are key in the British Championship.

MX Vice: Have you rode Lyng before do you like the track?

Gary Gibson: Yeah I rode there last year but like I say I struggled in qualifying so I got a bad gate pick and then you get closed in on the first corner so qualifying is the key to get the starts and the gate pick. I would like to thank Bannside Pallets and Haulage, I have Russells motorcycles on board this year, G&G Ross Paul Heaney and Risk racing.