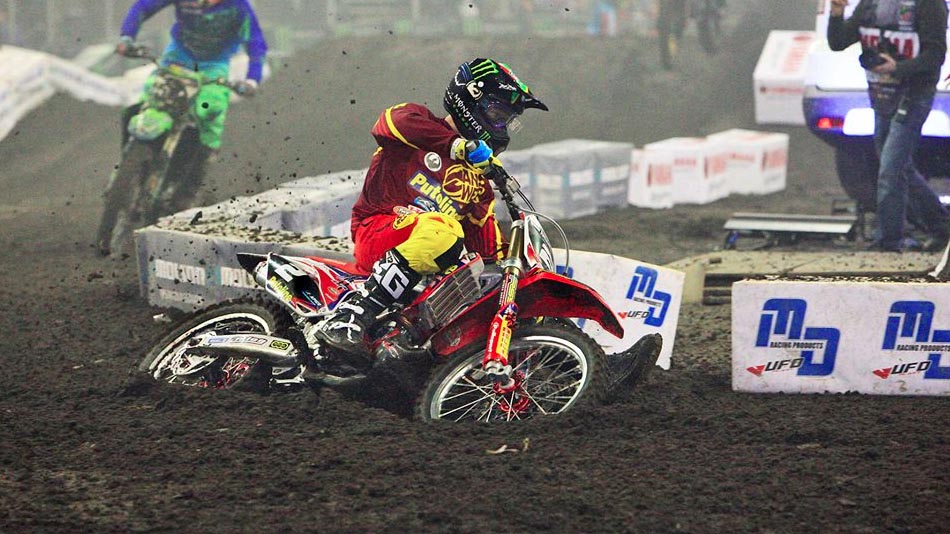 The Putoline Apico Honda team, along with there two riders, Neville Bradshaw and James Harrison made the long trip to Northern Ireland last Friday and Saturday to take part in rounds one and two of the 2014 Arenacross series and came away with results that didn’t truly reflect the teams pace and commitment.

All through qualifying on Friday Neville was always in the top three fastest and with James adapting well to the new team and motorcycle brand, things were looking good.

Neville was fifth fastest from both groups of pro riders and was the fastest MX2 machine while James made it into the main event after finishing second in the LCQ race and the scene was set for a thrilling final race of the evening.

Neville made an uncharacteristic mistake at the start of the race by misjudging the drop of the start gate and hitting it, which meant that as the pack was disappearing up the start straight Neville was towards the back, with James one place behind him.

With the race only twelve laps long and arenacross tracks notoriously hard to make a pass on, Neville did what he could, finishing eighth with James just one place behind him.

Neville said after racing was finished for the day, “I misjudged the gate and hit it before it went down and that put me dead last. But the track has become like a sand race all follow the leader with deep ruts everywhere. Eighth is not good, but I won the “head to head” and tomorrow is another day”

It was a similar story on Saturdays round two with both riders doing well in qualifying and in the two heats, with Neville taking a heat win and James acquitting himself well but just missing out on going to the main event.

Neville got a reasonable jump on the start gate, but got tangled up with some other riders in a first turn crash that once again put him at the back of the quick twelve laps race.

After making his way to eighth place a simple mistake saw him drop back to tenth at the chequered flag the disappointment already showing on his face.