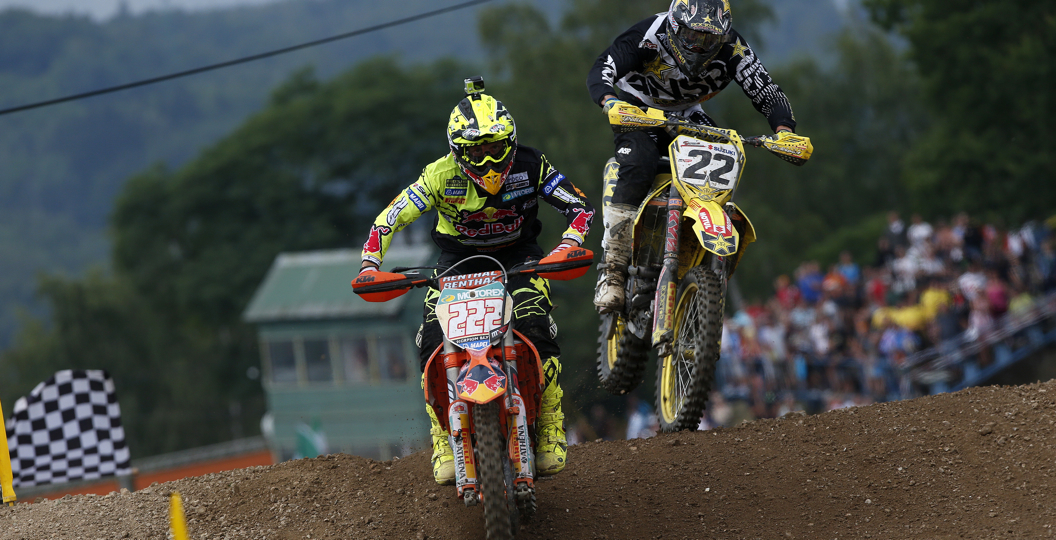 Following a relatively quiet weekend, the world of motocross will fire into life again over the next two days, as the FIM Motocross World Championship will resume after a month break. In the UK, the penultimate MX Nationals round will take place at Preston Docks.

Although it seemed like the MXGP title fight was getting close at one point, Antonio is now unsurprisingly in a position to lock up his eighth world championship a round early. With an eighty-one-point advantage, it seems inevitable that the Sicilian will clinch it, as the chances of him losing twenty-one points to Jeremy van Horebeek on one weekend are extremely low. Both van Horebeek and Kevin Strijbos are alone in second and third, so they have nothing to lose and may be pushing harder than Tony, which means we may see either one of the two Belgians on the top step.

Will Simpson or Frossard take control of fifth?

Although the top four positions in the MXGP series are all but decided, the fight for fifth in the championship is raging on between Shaun Simpson and Steven Frossard. The two have traded momentum a lot at recent rounds, although you have to think that Shaun holds that currently following his recent success. However, the MXGP of State of Goias (that just does not sound right) should not favour either guy, so they will continue to duke it out. Nine points is the current gap between the two, which is nothing in the grand scheme of things.

Can Jordi Tixier put himself in a position to win?

Jordi Tixier is currently fifty-seven points down on his superior teammate, Jeffrey Herlings. Although reports suggested that Jeffrey Herlings was going to attempt to line up this weekend, he won’t be. So, in order for Jordi to put himself in the best possible position to win the world championship, he really needs to go 1-1 on Sunday, which is something that he has never done before. If he does that, the gap will be seven points going into the last two motos and if that is the case, you have to think he would be the favourite.

Who will be next to clinch their first GP victory?

When it was first revealed that Jeffrey Herlings would have to bow out with a femur injury, many riders realised that now was a great chance for them to steal their maiden win. Both Tixier and Max Anstie have taken advantage of this so far, and there are a whole host of riders that will be looking to do the same over the next two rounds. Dylan Ferrandis, Romain Febvre and Tim Gajser have to be the favourites to do this, but they will have to get around a highly motivated Jordi Tixier and the returning Arnaud Tonus.

Will the recently returned riders be ready to fight?

Both Gautier Paulin (MXGP) and Glenn Coldenhoff (MX2) returned at the last two rounds, but have not made too much of an impact yet, simply because they did not have too much race time under their belts. However, a month has past since Lommel, so I expect them to be much stronger at these last two rounds. Obviously they are both potential GP winners, so it would not be surprising at all to see them up on the box.

Is Whatley capable of closing the gap on Watson?

Although Kristian Whatley lost just three points to Nathan Watson at the most recent MX Nationals round (Culham), he desperately needed to close the gap there. He now has to overcome a thirty-four-point gap to overcome over the next two rounds, and honestly he’ll need some help. If he sweeps every moto from this point onwards (and Watson finishes second in them all), he will still lose the title by sixteen points. It will be interesting to see how he approaches the races in the coming weeks, but one thing is certain; he has to win. It will not be easy though, as Preston Docks (the site of round seven) is quite sandy and Nathan thrives in those conditions.

Who will split Whatley and Watson up this weekend?

Both Kristian Whatley and Nathan Watson were leaps and bounds ahead of their competitors at Culham, as mentioned above. But is there anyone that could potentially split them? The Buildbase Honda duo of Elliott Banks-Browne and Brad Anderson are the obvious choice, and potentially Graeme Irwin depending on how quickly he gets back up to speed. Gert Krestinov could also be up front on a good day, along with Martin Barr. All of these riders will be keen to end the season with a bang, too!

Will Mackenzie carry the momentum from Culham?

Going into Culham, everyone seemed to count out the two title contenders, because there were so many wildcards in the MX2 class. However, Bryan Mackenzie excelled and took the overall win. The good news for him is that the wildcards got in-between him and Neville Bradshaw, the series leader. So, as a result, the gap is now down to nine measly points. That could drastically change this weekend, as there will be a few very fast wildcards again. The race is on folks!