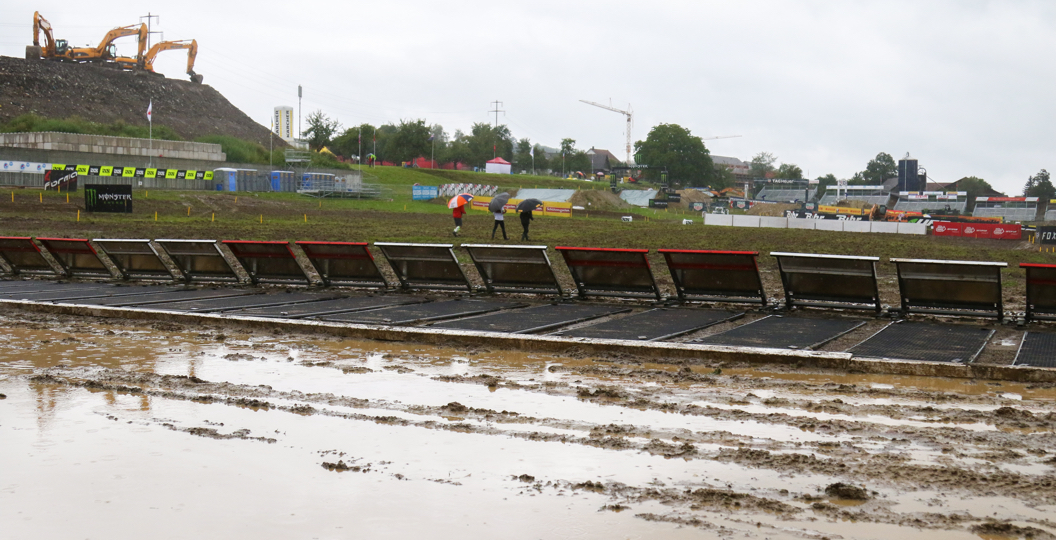 Pundits were sceptical entering the Grand Prix of Switzerland twelve months ago, as images of the circuit left a lot to be desired. The reality was much more appeasing, however, and consequently Frauenfeld-Gachnang is now a stop that everyone looks forward to. Antonio Cairoli has even proclaimed that this is one of his favourite tracks on the FIM Motocross World Championship tour.

Rain battered the area in the days prior to the event last year, which left conditions far from favourable in practice. Treacherous ruts were in place when things dried up and that created a brilliant circuit that offered some variety. Did this skew views? Perhaps, but we will not get an answer to that question this weekend. A substantial amount of precipitation has fallen thus far, much to the dismay of the Swiss fans, so conditions will be rather testing when the action begins. Sunny skies are supposed to prevail though.

Frauenfeld-Gachnang is a man-made circuit and one that could be altered at any point. The layout is identical to one year ago for the most part, but there is a major change. Rather than link back onto the starting line after pit lane, as the circuit did one season ago, it now hooks a left and runs around the back of the start. There is also a new jump in that section. The lap times were not exactly short last year, so this may boost them to more than two minutes.

Things typically become mundane at this point in the season, but interest in the premier division may be at an all-time high. The duel that Antonio Cairoli and Jeffrey Herlings had at the previous fixture, Lommel, has reached fans across the globe, but that is not all that has peaked interest within the paddock. Tommy Searle will finally return this weekend and tackle a circuit that he is capable of thriving on. It is difficult to know what to expect of him this weekend, as ‘100’ has not raced since the Paris-Lille indoor event in November!

The pressure is beginning to rise for those without a ride for next year, as Evgeny Bobryshev has been informed that he will not return to the HRC awning in 2018. Max Nagl, Jordi Tixier, Kevin Strjibos, Tommy Searle and many others are in a similar position and desperate to prove their worth to potential employers. Riders like Benoit Paturel and Petar Petrov are still looking for a route that’ll allow them to break into the competitive MXGP division also, hence why this topic is dominating discussions within the paddock.

There have been some noteworthy movements within the pits recently, as Team HRC have picked up yet another replacement rider in MX2. Taiki Koga, the Japanese IA2 leader, has been drafted in for this event and Uddevalla. “I am looking forward to my first weekend racing with HRC,” he said. “I came to Lommel, so I got to experience how everything and to get familiar with the series.” Jed Beaton is back beneath the Carglass Honda awning, as the EMX250 series will resume following a lengthy break, and will not race in MX2 until Assen.

That is all from a wet day in Switzerland. That should clear in time for the races, as mentioned above, so there is no reason to think that this is going to be a mudder. Then again, the weather forecasts have been wrong before.