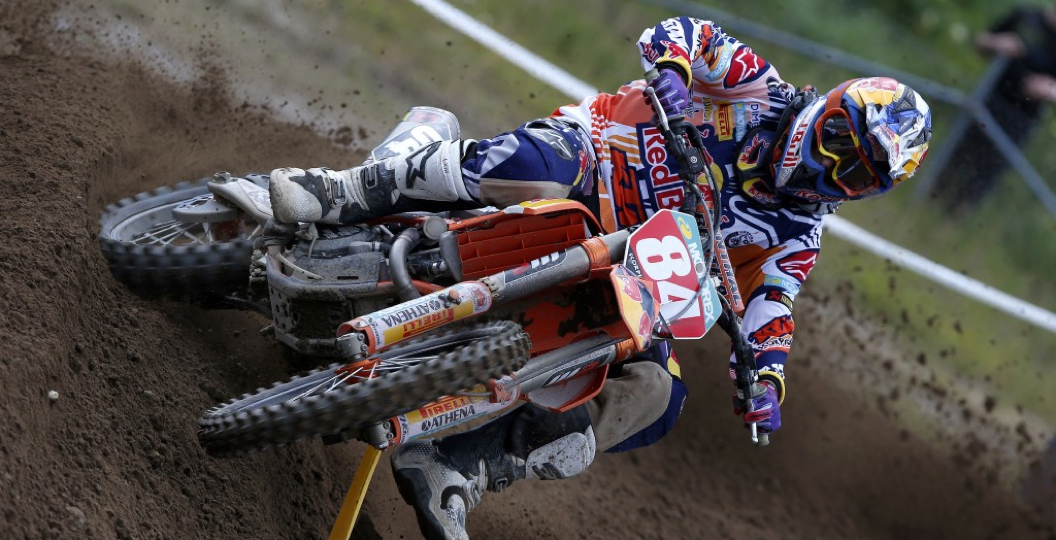 “No way?” That was the response of the majority of disbelieving and disappointed fans on both sides of the Atlantic when rumors and finally confirmation appeared about 19 year old Jeffrey Herlings’ broken femur riding an 85cc KTM. In the most important two months of the season, Jeffrey Herlings is once again on the sidelines.

Herlings will miss his beloved sand race in Lommel, the tenth Lucas Oil Pro Motocross round at Unadilla and, for the second year in the row, the Motocross des Nations. Herlings had the chance in Latvia to show former nemisis Ken Roczen and the Americans that he could beat them, but that will have to wait for another season, or will it?

Herlings may just try and ride the last GP (like he did last year) in a bid to secure his third world title. With the inconsistency of Herlings’ rivals, Jeffrey may even be able to miss the last three rounds and still win the title, but Herlings appears to be motivated to be ready to race (or at least ride) if needs be. Whether he would then race the MXdN half fit is extremely doubtful, but with Herlings you never know.

Jeffrey has a lot of critics, but the kid is a fighter and a winner. There is the danger that Herlings may not recover his speed after this latest injury and may not be the guy that he was before the crash. However, he can gain inspiration from Trey Canard, who has proven (twice) that you can recover from a broken femur and be back to your old level. Herlings also has Stefan Everts to lean on when it comes to recovering from serious injury. Everts lost three years of his career to serious injuries; a burst spleen in 1992, destroyed knee ligaments in 1999 and a badly broken arm in 2000. Each time Everts came back to win and be world champion. If he listens to Everts and is smart about his recovery, he should be 100% come the start of next season.

Unfortunately Herlings doesn’t have six months to get fit – he wants to ensure he gets his third world title! The Dutch wonder kid may have to think about his long term future rather than his short term goal. Herlings has the potential to beat Everts’ ten titles and win record; he has the potential to become the new GOAT. But one bad decision in the next few weeks could put that potential legacy in doubt.

The injury might also make Herlings think about how he rides. The Dutchman is like RV – flat out all the time until he hits the deck hard. Ryan Villopoto has only raced two outdoor seasons on a 450 since 2009 because of injuries, and Herlings has only completed two of his five pro seasons without injury.

Antonio Cairoli is the blueprint and has managed to stay injury free for every world championship since 2008. The Italian openly admits he doesn’t ride at 100% and his rides in Finland prove the point. While Herlings pushed hard all race to get massive leads, Cairoli controlled race one with a five second gap then pushed at the beginning of race two to get a 20 second lead and then controlled the race again. Cairoli showed he had the speed in reserve but decided not to use it.

Herlings might be the fastest man on the planet right now but sometimes being the fastest isn’t the same as being the best. Cairoli is still the best because he combines his speed with smarts and knows when to push and when to hold back. Herlings might need to adopt a similar approach in the future if he is to beat Everts’ championship and GP win records.

But Herlings aggression and desire is to be admired. He speed is simply frightening as is his motivation. Let’s not forget he has beaten RV, Dungey, Baggett and Barcia already in his career and he isn’t even 20 yet, he also came from on the ground in the first turn at Lommel to catch Cairoli, never mind winning GPs from fifteen years old, his two world titles and ridiculous winning streak in MX2. Herlings has achieved so much already but he always wants more.

Hopefully this injury will help Herlings in the future and not hinder him, but only time will tell.