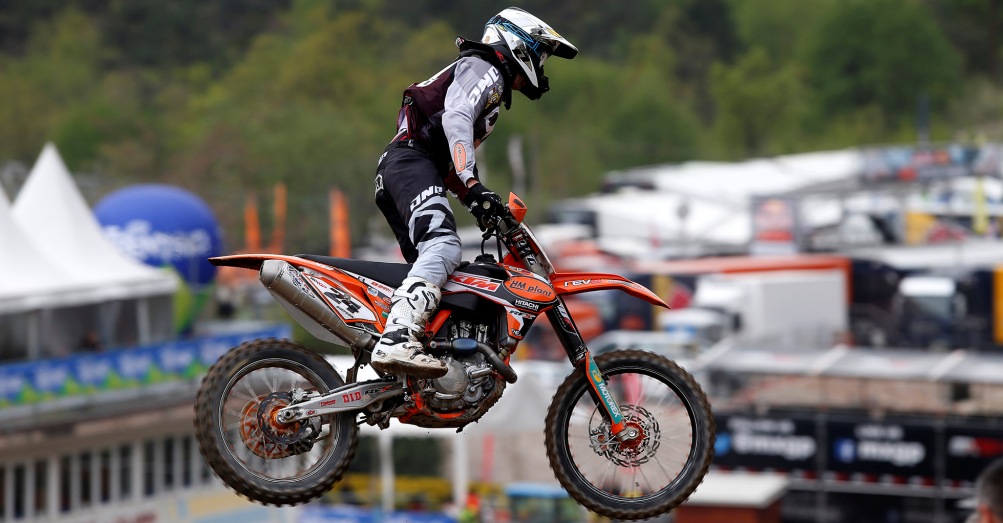 There were some distinct positives to take from the Grand Prix of Trentino and the fourth round of the FIM Motocross World Championship as HM Plant KTM UK encountered the toughest racing surface of the 2014 season to-date. Shaun Simpson steered his 450SX-F to a decent sixth position in the second moto of the premier MXGP class; his highest classification of the season so far. In the second outing of the FIM Women’s series Natalie Kane was third overall and collected the red plate as championship leader for the first time in her career. There was also encouraging news for Mel Pocock in MX2 as the Brit took a well-earned twelfth in the second race for his best result of the term.

The Arco di Trento circuit in the mountainous northern region of Italy around Lake Garda was a frustrating and immensely tricky, narrow layout of hard-pack terrain, bumps and minimal traction. It was an acquired taste which the majority of the Grand Prix fraternity struggled with and the fact that the slightest error could result in some sketchy repercussions meant that caution and course respect was prevalent. Even more emphasis than usual was placed on the starts due to the tight, restrictive nature of the track.

25,000 spectators turned out for the first European taste of MXGP this year and British Championship leader Simpson endured two different motos. A poor getaway in the first sprint of 30 minutes and 2 laps meant a race-long trudge to reach the top ten and he was further hampered by arm-pump. After taking part in an intense multi-rider battle for the fringes of the top half of the leaderboard, ‘24’ came home with 12th place. The next moto saw an improvement. He found a more effective rhythm to draw up to the back of the top five and gain ground and positions for a slot more appropriate for his speed and form. With sixth in the bag the Scot secured seventh overall and has now risen into the top ten of the MXGP standings.

In MX2 Mel Pocock had some technical trouble that meant reversion to his second bike. Another current British Championship leader, Pocock’s first race was ruined by a run-in with Alex Tonkov and both riders hit the dirt. He finished outside of the points. A faster start in Moto2 yielded a better opportunity for points and Pocock found some decent pace to circulate to 12th; like Simpson finishing the weekend with cause for optimism.

Beside her team-mates Natalie Kane took her second podium result in a row in WMX and has yet to drop out of the top four in all four motos of the season so far. The Irishwoman showed maturity and composure to run to fourth and third positions and due to a non-classification by Meghan Rutledge has seized control of the standings by two points from defending world champion Kiara Fontanesi.

Kane will next be in action with her 250SX-F in Holland in three weeks time while Simpson and Pocock will tackle the hills of Sevlievo next weekend for the Grand Prix of Bulgaria.

Shaun Simpson: “I feel good. I ended the weekend on a positive, which is always a good way to get you through the following week leading up to the next GP. I haven’t really been brought up on this terrain so it was a case of toughing out this weekend, gritting my teeth and really trying hard. In the first race it was hard to pass, especially with my start but I grinded out a 12th that I thought was a good ‘save’ really. The second race was better start, better lines, better rhythm. We have a bit of work to do on the bike for these kinds of conditions but I’m sure we can get that dialled in for the next time we come to somewhere similar like Uddevalla or Loket. I’m looking forward to next week and really getting this 450 opened up. Here was a bit tight and twisty and Bulgaria is more about speed.”

Mel Pocock: “We had some problems with my first bike which meant we had to use my second for the races. A bit of a bummer. In the first race Tonkov and I crashed together and it wasn’t really anyone’s fault. We both ended up with our bikes on top of each other. On this kind of track you need a good start and then just be able to sit there and settle in. I had a better one in the second race and was careful in the first few laps. I used my head and was trying to change up a gear and ride the bike with the correct rpm. I came up with a steady twelfth, which was an improvement. I’m fast enough for the top ten; I just need things to come together.”

Natalie Kane: “I struggled all weekend with the track. I liked the ground but when it was watered then it just slicked up. It was all about mistakes because you could gain time on others but also lose it! So I didn’t feel that comfortable but we came out with a good result and I’m really happy to have that red plate.”