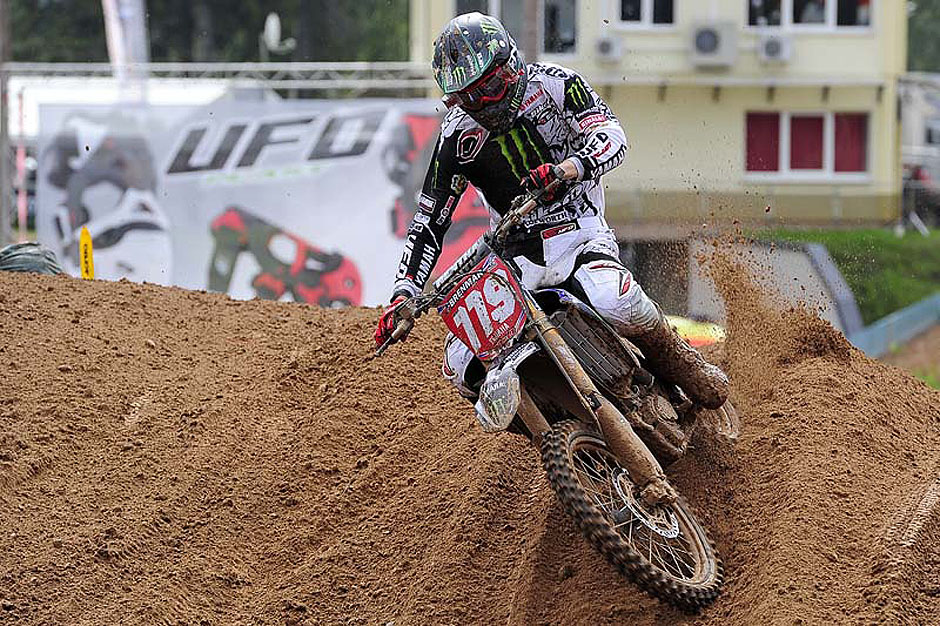 sounds good don’t it? MX Vice certainly like the sound of it anyway. Young Mel really got a firm grip on the European EMX 250 championship in Latvia and fingers crossed, with a little more luck than Tommy of late he can bring it home. C’mon Mel, you can do it! Here’s the official run down from Youthstream.

The UEM EMX250 riders had to face a very demanding and rough track this morning when they took part in the second and final race of the Latvian round. It had been raining a lot before the race, but it was not a problem for Mel Pocock to obtain another victory and go on the first step of the podium again.

Monster Energy Yamaha’s Mel Pocock admitted that he felt like home this weekend, because lately he had been racing under the rain in England, so it was easy for the British rider to take the holeshot of the second race and dominate the heat with authority. Pocock is now leading the series with 20 points advantage over Stefan Olsen.

Jtech Racing’s Stefan Olsen started among the top five riders this morning and even he struggled with the track, he was able to finish second like he did yesterday. The Danish rider finished second overall today and he moved from third to second in the championship.

Mike Kras was very satisfied for being third overall this weekend especially because he could not show his real potential in the first round. This weekend he has been third in both heats, and while yesterday he rode a consistent heat among the top three, today he had to give his best to move from sixth to third. The Dutch rider has moved from eighth to fifth in the championship.

KTM Silver Action’s Tim Gajser, who is the leader of the EMX 125 championship, was back on his bike this weekend to dispute the second round of the EMX250. The Slovenian rider finished fourth in both races and he was fourth overall of the Latvian round. However, he could have been fighting for the podium if he hadn’t crash in the second heat when there were only three minutes to go. In any case, Gajser had an excellent weekend.

Brian Bogers completed the top five thanks to a 6-5 result. It was the first time the Dutch rider was able to take part in the UEM EMX250 championship, so such result has proved that he has the speed and the talent to be fighting for the top positions of the championship.

It was not an easy weekend for Jeremy Seewer, who made a mistake in the first heat and had to settle down with the eighth position. Today the Swiss rider started tenth but he was able to cross the finish line sixth and obtained a final sixth position.

In the beginning of the race today Damon Graulus and Maxime Desprey had an intense battle for the second position, but both riders crashed in a corner and they lost the opportunity to be fighting for a top five result today. Graulus was quicker than Desprey to be on his bike again and finished ninth in the race, but it took Desprey some time to start the bike and get back the rhythm. Unfortunately, the French rider had to pull out the race due to a mechanical problem.