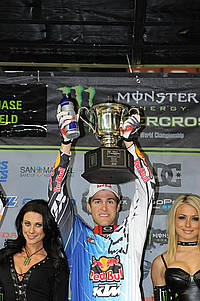 Round 2 of the Monster Energy Supercross series,and its KTM`S Ryan Dungey who shows his hand and checks out to take his first win of the 2012 season,and KTM`S first ever podium in supercross.Dungey, Just like Villopoto the previous week,grabs the holeshot and leads the way for all 20 laps of the final to take an impressive win,but it was action all the way behind him.Villopoto finds himself on the deck on lap 1 and has to start all over again from last place..leaving team mate Jake Wiemer in 2nd.Wiemer rides a calculated race ,holds his position to take his first open supercross podium.Who was going to take 3rd was anyones guess..Windham held the position but was in a dogfight with Reed,Metcalf,Caynard,and Short,add James Stewart to the mix and it was game on…Stewart then goes down after battling with Reed,game over once again for Yamaha rider.Then its all eyes on Villopoto who`s been on a mammoth charge from the back passing everyone including Windam late in the race to finish a gutsy 3rd at the flag,and all from dead last leaving himself and Dungey tied on points going into Round 3.