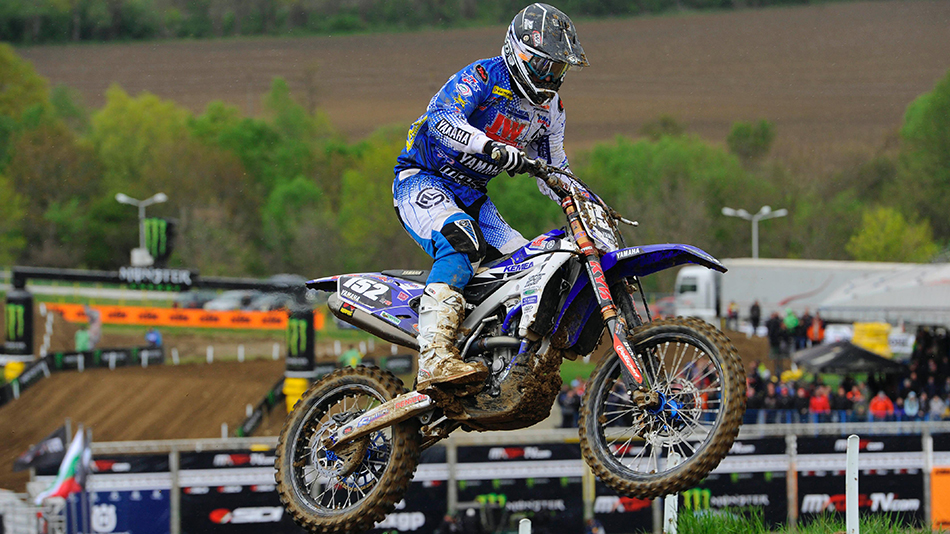 Lewis PhillipsApril 21, 20140
Kemea Yamaha Racing’s Petar Petrov was the standout performer for Yamaha in the MX2 division of the FIM Motocross World Championship as he rode to sixth position at a rutty and difficult-to-judge Sevlievo circuit for the Grand Prix of Bulgaria.

Sevlievo was under grey clouds and incessant rain during the days before the MXGP paddock rolled into town but the watering helped to soften the hard-pack. The effect on the track made the fast and hilly layout more technical and tacky but also extremely rough. 20,000 spectators took advantage of the Easter holiday weekend to take-up a vantage point on the Sevlievo slopes and were cheering on Petrov – locally born – as the only Grand Prix regular from Bulgaria on the international MXGP stage.

‘152’ gave the fans plenty to shout about. A first lap crash saw him restart from last position in the first moto but his speed and determination was inspiring. The nineteen year old fought all the way back to an excellent eighth place. In the second moto a more beneficial start meant he could concentrate on a higher slot. Rainfall descended midway through the afternoon and this changed the track conditions but Petrov was unstoppable and reached sixth spot for the same ranking overall for the day.

Team-mate Luke Styke was seventeenth as he continues a hard adaptation process to grand prix in his first international season and Bike it Yamaha Cosworth’s Max Anstie also had a tough day. The Briton is in the midst of a development programme with the team’s technology and was thirteenth overall with a 13-15 score.

In other news factory rider Christophe Charlier is taking positive steps in his recovery from a broken leg suffered at the Grand Prix of Thailand and will soon be able to concrete a firm return date to the GP track. Sevlievo saw the second round of the EMX125 championship (the second stop of eight) and steering the YZ125 was David Herbreteau who gunned the YRRD-kitted machine to his very first win at this level and was one of five YZ125 two-strokes in the top fifteen. Bulgaria also witnessed the launch of the EMX250 series – the final rung on the European ladder into MX2 GP racing – and Arnaud Aubin was the highest placed with tenth.

The shallow sand of Valkenswaard will be the next setting for the FIM Motocross World Championship and its support classes as the Grand Prix of the Netherlands will constitute round six of the calendar and the first of three meetings in May.

Petar Petrov: “Finally a good weekend, and it feels so much better doing it at my home race. Usually I ride bad over here but this year was really good! The track was so much different than other years. In the past it was fast and wide-open all the time but now there were deep ruts and you could make a difference. In the first moto I crashed after a couple of corners and was in last position. I put my head down and attacked as hard as I could. My speed was good and I enjoyed the race. The public was fantastic! They were cheering so hard and it literally gave me an extra boost. I finished 8th and was one of the fastest on the track, so that was good. In the second race my start was better. The track was tricky with the rain and I didn’t take too many risks. I finished 6th and had a good battle with Coldenhoff. I’m relieved I managed to finish two good races and this gives confidence for Valkenswaard, which suits me well.”

Max Anstie: “We not quite there yet and we need to work a bit more. The start of the season went well and we cannot afford to give away points like we did this weekend. We’ve got a couple of weeks now and we’ll see what we can do. I hope we’ll go to Valkenswaard with an open mind. The track was alright and quite cool. It was difficult, rutty and technical. I felt good about there and that’s the frustrating thing.”

Luke Styke: “Saturday went good for me. I had a good feeling on the track and finished 12th. On Sunday it was more difficult. The first moto I was in 15th for pretty much the whole race. On a jump I hurt my wrist a little and after that I rode tight and cautious so as to not to hit the wrist again. In the second race I was riding tight once more to finish 16th. Back to Belgium now and we will continue to work hard for the next race.”