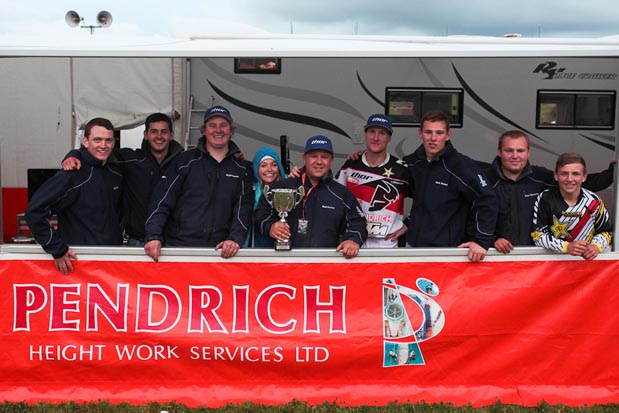 From one end of the country to the other, Pendrich KTM made its second-longest journey of the year to Little Silver just outside Exeter in Devon for the grand finale of the 2012 Maxxis British Motocross Championship. The complete team was in action this weekend, from MXY85 rider Lee Perfect to new MX1 try-out Ross Rutherford. The horrendous weather predicted for the weekend thankfully never materialised, giving the final round overcast but dry conditions.
The morning’s qualifying sessions got underway with the MX2 class, with Bryan Mackenzie improving a fifth place in timed qualifying to a fourth in the super-pole. In the MX1 class, new team rider Rutherford stormed into the top twelve in timed qualifying, but had to make do with eleventh in the super-pole, while Mark Perfect, now also riding a big bike, qualified in twenty-ninth. In the MXY85 class, the youngest team member, Lee Perfect, qualified in seventeenth.For Mackenzie, this final round was the highlight of the year. A stunning first race start developed into an astonishing race lead for almost half the race, before having to yield to fellow KTM rider Elliott Banks-Browne. The second race was even more impressive. Out of the gate like a shot and through the melée of the first corner, Mackenzie took charge and led the field for the majority of the race. Only with the timer ticking down the last few seconds did he have to give up the lead to Banks-Browne.The final race of the day was another super-final in which both classes combined their top twenty riders. A restart left Mackenzie just outside the top ten, but he soon made progress, climbing into the top ten and then settling into eighth place, ending as the fourth MX2 rider across the line. That, together with the two stunning race results earlier in the day, earned Mackenzie a second place on the podium, the best result all season.

For Rutherford, the first race got off to a mid-pack start, but the Scot soon found himself in a battle for a top ten spot. Although his challenge was not quite successful, he ended the first race in eleventh. The second race did not get off to as good a start as the first, but Rutherford was soon back in the top twenty. The race winding down and the two-lap board out, he caught a second wind, passing four rivals in one lap and moving into fourteenth at the chequered flag, putting him safely inside the top twenty for the super-final.

With said race restarted, Rutherford had another top twenty start and moved into the top fifteen soon after. Settling into a rhythm there, he challenged several more rivals to take twelfth place at the chequered flag and ending his first round for the team in a fantastic ninth place.Mark Perfect moved into the MX1 class to try something different after his hard year in the MX2 class. His first race got off to a good start in twenty-first and he found himself in very tough competition. Embroiled in a battle early on, he had to make concessions in the latter half of the race, ending the race in twenty-eighth. The second race was an improvement with Perfect making continuous progress throughout the race. A small set back fifteen minutes in was soon overcome and he made progress again, ending the race in twenty-sixth.

Lee Perfect’s first race ended before he even really had a chance to get settled. A mechanical failure whilst chasing after a top twenty spot forced him out of the race and back to the paddock. The second race was an improvement, with Perfect making great strides in the first two laps before settling into a points chase that ended in sixteenth for a twentieth overall.

Commented team principal Mark Perfect: “A great end, a great finale to the season, taking into consideration that we’ve not had a podium all year and then boom, we’re second on the day and third overall. It’s a great achievement and over the last few weeks what we’ve seen is a massive improvement in the team morale, everyone’s involved. We’ve managed to secure ourselves a permanent practice track which we’ll have all winter and the coming months, which is helping the guys no end. It’s a sand track so we’re riding it wind, rain, sleet or snow. They’re riding the bikes constantly and it’s paying dividends in the results that are coming through. “With Mark I’ve seen a difference, today was another good ride and I could see flashes in there of something that could be good, and we’ve brought Ross in to give him a chance with the team and he’s stepped up with the super-pole and obviously his results throughout the day were making the mark and I think he’s pleased with the way he rode and with the way the bike’s performed. We’re just looking forward to next year now.”

Bryan Mackenzie (#121): It’s been a really really good day today, started off great with a good time in super-pole, I was fourth. I’ve had good starts all day, even in the combined last race, and I guess having raced the GPs on the big bike recently maybe brought my speed along a bit. I was more than happy to get back on my small bike though and wring the neck off it all day and it’s just been awesome. It’s a brilliant way to end the season. I got third in the championship which is even better, especially for the Pendrich KTM team which we formed mid-season and it’s just fantastic.

Mark Perfect (#125): Today we moved up to the big bike class for the first time this year. I’m a bit big a guy for the 250, but I’ve been practicing on the 350 anyway, so we’ve been getting my practice bike ready, and we jumped into the MX1. Today we feel has been a step in the right direction, we actually managed to race with people today, and mix it up a little bit, I was pretty pleased with how I managed in the race and was pretty close to the points, so pretty happy today and I think MX1 class seems to be the way forward.

Ross Rutherford (#295): Qualifying was good, first time this year was in the super-pole, I was happy with that. My starts all day were terrible, I think I was off the start last, but I think I got back to eleventh in the first race and fourteenth in the second which I wasn’t too happy with. In the last one I crashed and got back to twelfth and was really happy with that. Ninth overall, the best result of the year, first race on a new bike, so quite happy.