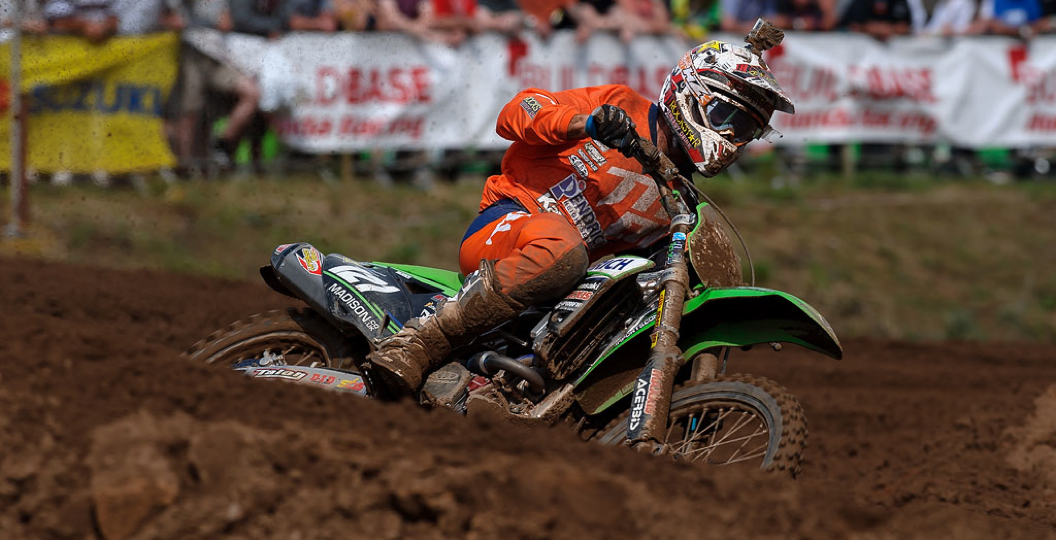 As the Maxxis British Motocross Championship season moves towards its end, it visited Fat Cat Motoparc in Doncaster for the sixth round. Heavy rainfall overnight on Friday and Saturday, and rising temperatures during the day made racing on Sunday a tough, hard slog.

For Bryan Mackenzie, MX2 qualifying went well with a fifth in super-pole. For Ross Rutherford, the MX1 session was not quite as fruitful, ending in twenty-fifth.

Bryan’s first race didn’t get off to the best of starts. After a coming-together with rival, Mel Pocock, he had to restart from the back of the pack and spent most of the race just trying to make headway back into the top ten. With corners to go, he pushed on back into eighth for a great recovery ride. The other two races were solid runs in the top ten; the middle race was a beautiful piece of work that ended in fourth, while the last race, despite a looming mechanical issue, ended in eighth for a solid seventh place on the day and maintaining his fifth place championship position.

Despite best efforts, the day was a big disappointment for Ross. A crash on the start cramped his style, leaving him to work back to twenty-first before another crash due to his ongoing arm pump problems put him out of contention. The second race got Ross away on a much better footing, with him moving into fifteenth place by mid-race. But again another big off spelled the end shortly after, and with the track only getting rougher, the team made the call to call that effort a day.

Bryan Mackenzie: “Today was actually not too bad. This morning I kinda got into the track and ended the super-pole in fifth, which I was pretty happy with. In the first race I got not too bad a start, in fact all day I was getting starts around sixth or seventh, which was giving me a pretty decent position, but in the third corner I went down. I started from what I felt was dead-last and I put in a pretty solid ride, going pretty good and got back to eighth, which I thought was a good result considering. In the second race, I had another decent start but the bike was making a bit of a noise towards the end and I had to alter my riding a bit to try compensate for it. BC tried to change it for the last race but straight out of the start it was still not right and progressively got worse and in the last couple of laps I was just trying to finish the race. It’s one of those things, BC done his best to try solve it in the short time between races but at least I finished all three races, it could’ve been worse and we could’ve broken the bike and not scored.”

Ross Rutherford: “Today just kind of went the way my racing’s been going for a while now, I kind of struggled in qualifying and in the first race I just got really bad arm pump. I’ve struggled with it really bad this season, we’ve tried everything, we changed a lot on the bike, even recently, we thought we’d solved the problem but today proved that we hadn’t. We’ll just try to work on it and see what else we can do and yeah, I’ll be back at the next one and try my best again, but thanks to the team and everybody who helps me out and Lesley my girlfriend, yeah, thank you to them and we’ll try to beat this problem and be back where we should be.”

Mark Perfect: “This weekend’s been mixed, we’re not finding a groove at the moment, I don’t know if it’s the tracks we’re riding at the moment but we’re not finding any rhythm either on the 250 or with Bunga on the 450. Training and everything else is going exceptionally well, riding in practice is excellent and we can’t hope for anything better, but when we come to the races, we’re just not picking up the results we deserve. Overall the consensus of the weekend was a bit disappointing, I just don’t think we’re getting the results for the efforts we put in but we won’t stop driving forward.”