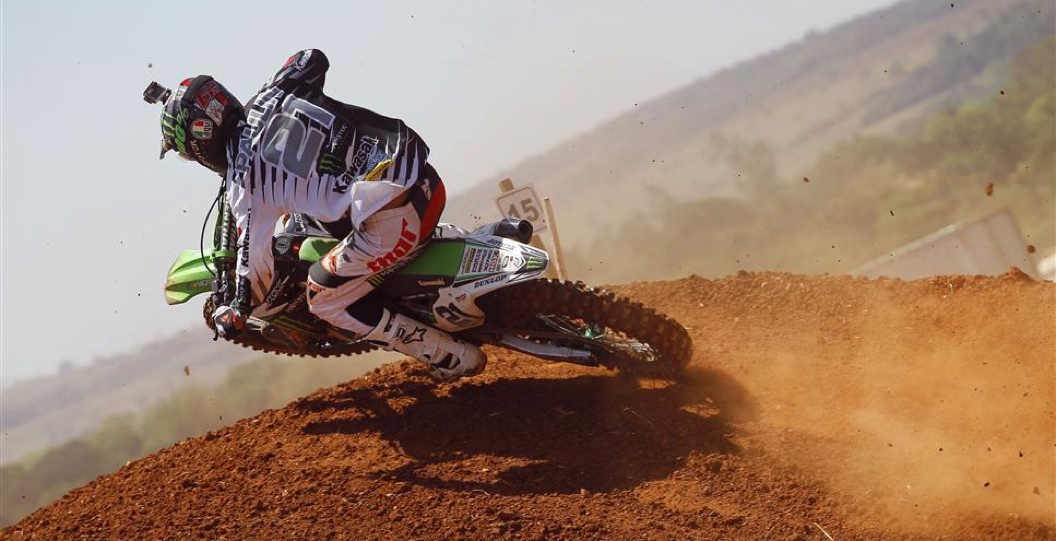 Gautier Paulin returned to the podium with second place overall for the Monster Energy Kawasaki Racing Team in the penultimate round of the FIM World MXGP Motocross Championship at Trindade in Brazil.

It was the Frenchman’s third GP since his return from injury which had ended his world title challenge and second place in the qualification race augured well for race day. Sadly Gautier found it difficult initially to advance from his sixth placed start in the first GP moto and had to be satisfied with fourth at the fall of the chequered flag. He managed to take over second place much sooner in race two but the race leader had already made good his escape and Gautier had to be satisfied with second place in the moto as well as second in the overall classification. Despite missing seven GPs he is now secure in eighth place in the series points standings prior to the final GP of the year.

Teammate Steven Frossard had been less fortunate in qualification and had to be content with ninth choice of gate, but he left the first turn third and moved forward to second on lap three before he twisted an ankle and had to give up hopes of chasing down the leader. Starting race two in pain, an unfortunate incident on the opening lap saw Steven fall but after a strong charge back to seventh, he has taken over fifth place in the championship points standings with one round of the series remaining.

Gautier Paulin: “It’s always cool to come to overseas GPs, and it’s great to be back on the podium. In the first race I didn’t find a good rhythm and lost too much time to pass some riders; my second start was better but when I got through to second the gap was too great to catch the leader. With a fourth and a second position I finished the GP runner up; the goal since I returned to racing is to win races and I will try to do it next week at the final GP, and later at the Motocross of Nations.”

Steven Frossard: “I was happy with my result in the first race, even though I twisted my ankle at mid race. It was painful but I could ride the second moto, however when the front wheel slid away in a corner I didn’t want to put this foot on the ground and I crashed, losing time and positions. I’m disappointed as I missed the podium by just one point, but that was good to secure good scores in both races. The track was nice to ride; for me it was the best one of the series with a lot of grip in the corners and I hope we’ll have more tracks like this one next season.”