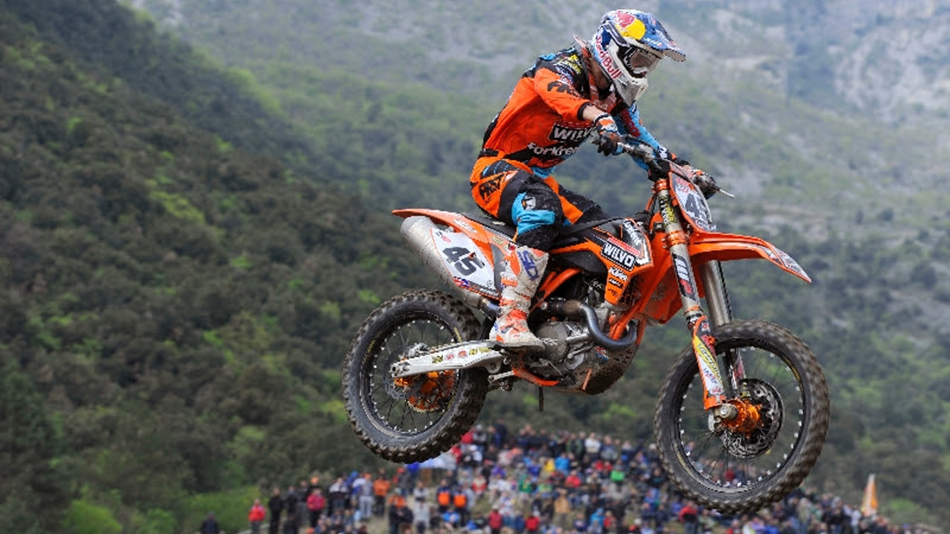 Nicholls lands in the top ten in Trentino

Trentino, Italy, 13 April 2014: After returning to the workshop in Holland for a couple of days following the team’s British Championship exploits, Wilvo Forkrent KTM travelled across Europe to Trentino in Italy for the fourth round of the World Motocross Championship.

Jake Nicholls made a great start from sixth in qualifying with teammate Matiss Karro just behind. The MXGP rookie rode superbly throughout holding position for the whole race finishing in sixth. Karro finding it a little more difficult struggled with the track, completing the race in 14th place.

Both riders made reasonable starts with Nicholls moving into 11th and Karro 12th as they both gained places as Frossard went out. Nicholls was looking to move forward but as he switched lines to pass Roelants he opened the door for teammate Karro to move through. This was repeated a number of times as he tightened up and began to struggle with arm-pump. As the race wore on he managed to settle down and find his rhythm eventually crossing the line in 15th.

Karro rode a strong race and continually pushed on the tail of Roelants just in front. A couple of mistakes on a difficult track allowed Philippaerts and Boog through and then Simpson on the penultimate corner losing a place to finish in 13th place.

Nicholls made a cracking start in race two rounding the first turn in seventh. After conceding a place to Simpson he settled into a good rhythm, staying with his compatriot as they clicked off the laps with the pair moving up a position as Bobryshev crashed out.

Karro started in thirteenth but was still struggling with the track and lost places early on before regrouping to eventually finish in 15th. Nicholls chased Simpson throughout but despite posting faster lap times he just couldn’t find a way past and as the race drew to a close he found himself under attack from the group behind. Although he lost a couple of places he still finished in a fantastic ninth place giving him his first top ten of his World Championship campaign.

Commenting on the weekend Jake Nicholls said: “A good weekend for me here at Arco di Trento. Qualifying went well, I got a good start and rode a strong race for sixth. In race one on Sunday I got a decent start but never really found my rhythm after getting held up by a few riders. I got swamped by the group behind and ended up in 15th. The second race was much better after another good start in seventh. I followed Simpson for the whole race and was faster than him in the last third but failed to make a move; with two laps left whilst trying to pass him I lost two places instead. I still finished ninth which I’m really happy with, it’s my first top ten in MXGP but more importantly the first time I’ve totally clicked with the 450.”

Matiss Karro added: “It was tough for me this weekend. I struggled with the track in both races and I couldn’t find the right lines and never really felt confident on the bike. I still managed to post two point scoring rides and didn’t crash so I’m happy about that.”

Team Owner and Manager, Steve Turner said: “I’m really happy that Jake took his first top ten. He made two good starts but in the first race I think he just tried too hard to make passes and lost places as a result. In the second race he rode with great rhythm throughout and was unlucky that he lost a couple of places at the end, but ninth is a fantastic result. The track was really narly catching a number of riders out and Matiss struggled to get to grips with it all weekend. But at least he stayed safe and hopefully he will have a more productive time in Bulgaria which is a track he likes.”

The team go into the MXGP of Bulgaria on 20th April with Jake Nicholls in 15th and Matiss Karro 17th in the Championship.