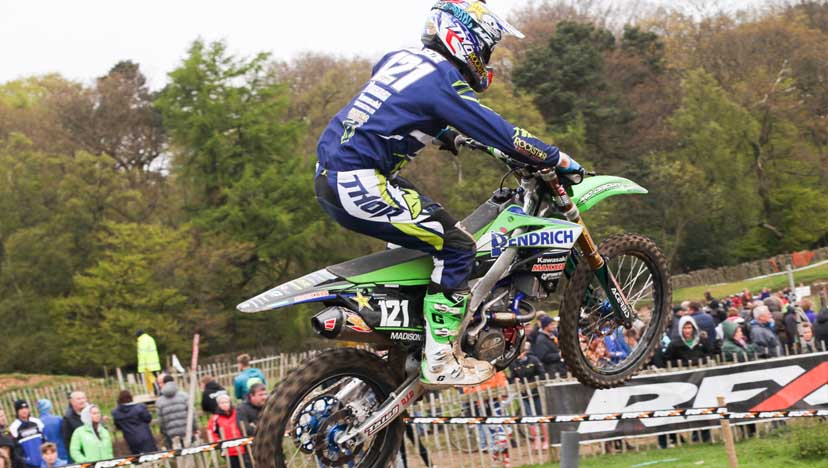 The Early Spring Bank Holiday Weekend saw the Pendrich Height Services Kawasaki team travel to what is often called its home track on the national circuit – Whitby. The lovely weather in the picturesque location made for a good weekend’s racing, and it also signalled the return of the MX1 team rider, Ross Rutherford, and a change in format as the MX Nationals kicked the mixed-class format into touch for a return to separate classes.

Junior member Lee Perfect continued his campaign for top five finishes in the Under 16 class. After qualifying in sixth, he then put together two solid races on Saturdayafternoon, ending in fifth and fourth after two good starts. Sunday morning’s wet track however put some brakes on progress; after crashing hard in the first lap, he fought his way forward again to seventh. Another slip relegated him to tenth at the chequered flag. The final race of the weekend saw Lee off to another excellent start in third. Despite tough battles he had to concede his position to end fifth, and sixth overall on the weekend.

MX2 rider Bryan Mackenzie got off to a great start on the weekend by qualifying in second; he followed that up later on Saturday afternoon with a great second place in the first race of the weekend. With the overnight rain changing the way the track surface changed throughout the day, Sunday’s first race was not what Bryan considered to be up to par. After being crowded out of the top three on the start, he struggled to make much progress, gaining only two positions before the chequered flag waved thirty minutes later. The last race of the weekend had the makings of a great race. A half-hour battle with the championship leader Neville Bradshaw for third place culminated with Bryan being forced to concede his spot on the second last corner, hitting the deck in the process. Much to his relief there was a sufficient gap between him and the next rider to not lose more points. Despite the Sunday hiccups, he walked away with second place overall on the weekend.

Ross, having recovered from his hip injury sustained at Culham, qualified in eleventh in the MX1 class on Saturday. His first race of the weekend was arguably the best; after coming from a mid-pack start, he found himself in seventh only a lap later, where he held off fellow Scot Tony Craig for the majority of the race before having to concede his position to Gert Krestinov with a few corners remaining due to arm pump. The second race of the weekend again got underway in the middle of the pack; this time however the progress was more measured before falling back to tenth for the latter half of the race. The final race was a disappointment for Ross. After his best start of the weekend, he almost immediately started suffering from arm pump and to make matters worse, lost his grip on the handlebars twice in quick succession. Knowing that the situation would get worse, he pulled off for safety sake, scoring eighteenth in the end and taking home eleventh overall on the weekend.

Bryan Mackenzie: It’s been an OK weekend, I finished second overall, which is good, and I claimed back some points in the championship, but I had one good race, the first one, which was decent, it was a hard fight all the way. The races on Sunday haven’t been great, I found it difficult to pass and average starts left me with some work to do. I’m really frustrated with fifth in Sunday’s first race because I literally couldn’t find a way through. In the last one I moved into third, held third and had a great battle with Neville, who I’m battling for the championship with, and it went down to the second-last corner. I knew he was trying to set me up, I did the best I could to stay in front going into that corner but when he came around the inside and I tried to square him up, I hit his back wheel and went down, so I finished fourth and second overall. I’m going home happy.

Ross Rutherford: My weekend wasn’t great, I qualified alright, it’s alright for my first weekend back after getting hurt. The first race on Saturday I didn’t get a great start, but I fought through pretty well and got up to sixth, then got a bit of arm pump and finished around eighth, which I’m pretty happy with. The first race on Sunday was the same story, a bad start, fought my way through and then got arm pump, and the same in the last race. It’s just too bad that in the last race I lost my grip twice going into the big jumps and I just called it a day at that. It’s a decent day back, but there’s lots of work to get done.

Lee Perfect: The weekend started off pretty well, I started off with sixth in qualifying and improved throughout the day. I battled pretty well all weekend at the front. On Sunday we had some rain in the morning, so the track was pretty wet and sticky, I crashed a few times in free practice, then got a good start in the first race of the day, then crashed in the first lap, which put me down near the end, which wasn’t too good. I battled back to tenth. I had another good start for the final race and finished fifth, which gave me sixth overall.

Mark Perfect: It’s been quite a mixed weekend for us, we’ve had highs and lows. We did good in qualifying, Bryan had some good racing, which we’re pleased with, we’re coming away with a second which is not a bad result, but the way we achieved second was not the best, it was too inconsistent this weekend for me, and we’re trying to find a little more consistency. Bryan and Lee are making some silly mistakes and they need to iron them out, so that we can capitalise on the results that we should be getting. All in all, a second for Bryan, reasonable, and Lee, he rode well and had some good individual results, finishing sixth overall which is progressing. Ross is obviously still coming back from injury and he’s finding it a bit difficult with various elements of his injuries and hopefully we’ll get him back into a consistent race mode again.