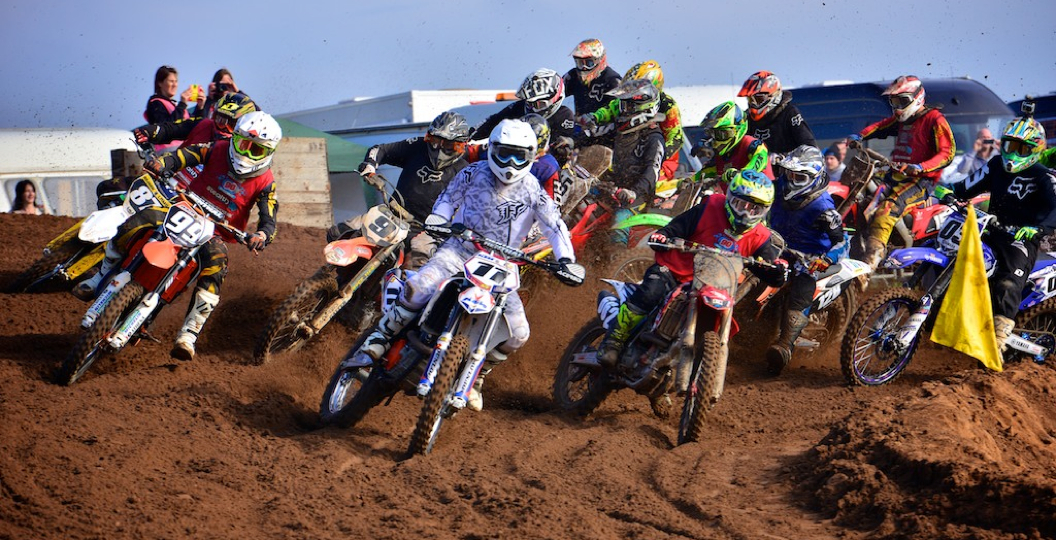 The first running of this annual event took place at FatCat Moto Parc on the 11th & 12th October. With full gates in every class and the venue full to the rafters with riders and spectators it promised to be one of the biggest events that the venue had seen and certainly lived up to its expectations. The week running up to the event had heavy rainfall, but when the clubs rolled into the venue they were met with a venue and track that was prepped to perfection by Martin, Neil and crew. The track was rough, rough, rough, but it held up and was magnificent to watch as 312 riders in 40 races powered through the sand. The races were fantastic with hundreds of spectators lining the barriers watching as the best club riders in the North battled it out for the title of ‘Northern Champions’.

Out first went the Autos, and what an effort these guys made to pull through the sand.  McKenzie Marshall was most consistent and took overall first place, just ahead of Kaie Stesel. Stesel had two cracking race wins until a poor last race saw him finish in second place. Riley Keene won the first race but couldn’t get back up into the top positions and finished the event overall third, just ahead of Harrison Drewell.

Next up went the Junior 65s and Riley Stesel was awesome to watch. Stesel took every race win and dominated the field to take first place overall. Alfie Wilkinson was consistently quick behind him and took a well deserved second place overall.  Recovering well from a poor first race to take third overall was Cameron Box, with Ryley Ferguson just behind him in fourth.

Straight on the gate went the Small Wheel 85 class, and a single rider again dominated this as Lewis Hall went all out for victory. Four race wins went to Hall as he swept his way to first place overall. Kyle McNicol won the first race but couldn’t get back to the front and ended second overall. Patrick Jackson was consistently near the front of the pack and took a hard fought third place overall. Danny Clarke pulled some super holeshots and kept the pace ending in fourth overall.

Up next rolled the Big Wheel 85s, and what a set of racing this was! Sam Price took three of the race wins and was awesome to watch as he took overall first. Jed Etchells took two of the race wins and was also fantastic to watch as he took second place overall. Jake Winnard was also consistently at the front and took third place overall in front of team mate Howard Wainwright in overall fourth.

Up next came the Rookies and they were just fabulous viewing for any race fan! Jay Hague was totally dominant in first place overall with all five victories, and the fastest lap time of any rider over the weekend. In second place overall was Callum Whaling, who was fighting his way through the sand, just beating James Henderson into third place position. Drew Roe was in fourth overall, taking a nice trophy home on his birthday.

Next on the gate came the Novice Cs and they were a mixed bag of results. Smith was most consistent and with two race wins under his belt took first place overall.  Kameron Carr also rode extremely well taking two race wins and just finishing in second place overall. Ryan Small was chasing all weekend and despite having mechanical failure took third place overall ahead of Ollie Richardson.

Finally, out came the Expert A riders and looking at the line up there was a huge expectation on these riders to put on a good show, and boy did they deliver! Brad Anderson was fantastic to watch, riding the whoops like they weren’t there and took a well deserved first place overall. Carlton Husband was laying it sideways over the jumps at FatCat and took two race wins as he powered into second overall. James Lassu rode hard, battling with Gavin Stevenson. Lassu had the better results taking third overall, leaving fourth to Stevenson.

When the racing was over it was time to consolidate the points and check out the best team in the North. Every rider rode 5 races, and their best four results counted.  The excitement built around the podium as the riders gathered in their teams and anxiously awaited their results. As the individual riders began to collect their awards it was apparent that in many of the classes Team 90 had outstanding results.

White Rose and Hound Dogs were mixing in, taking a couple of number one positions apiece. At the end of the individual awards there were hundreds of riders cheering for their teams, and the anticipation was palpable! As the results were announced it was to groans and cheers as in third place with 8094 points were the Hound Dogs.

There was a pause and then it was announced in second place with 9444 points were White Rose. There was a moment of madness as Team 90 realised they had won and then the points score was declared as 11205 – smashing the competition and taking the title of 2014 Northern Champions.

All clubs were celebrating by now, with fabulous results from all riders and 100% effort put in over the weekend whatever the team positions were almost everyone had a great time!  Of course you can’t have an event of that magnitude without a few casualties, thankfully nothing serious, and we wish get well soon wishes to any injured riders.

Thanks to all the event sponsors Muk Junkie, Spiral Graphics, TMX/DBR, Trackform UK, Jackson Builders, Bos Group, Houseman Race Engines, Chris & Angela Ross, Harmans & PBUK. They contributed towards goodie bags for all the riders, top ten trophies in every group, top 3 trophy plates in every class, three lots of holeshot prizes and the excellent team trophies, including the magnificent silver cup to be the annual award for the winning club!

A big thanks to all involved in making this event happen, FatCat Moto Parc, Chloe and Darren Hudson, the 90 Racing and Whiterose track crew and officials and of course all the riders! Next years date has been set for the 10th & 11th October, again at FatCat so make sure your club or team register early.