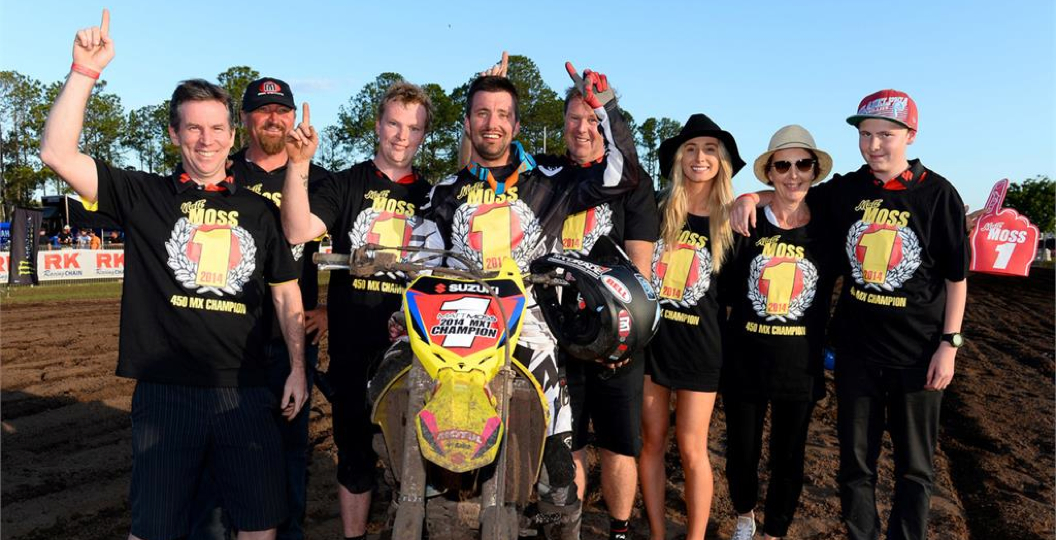 The 26-year-old recently clinched his second consecutive MX Nationals MX1 championship on board the Jay Foreman Racing-prepared RM-Z450, today confirming the pairing will aim for a third premier class outdoor title together next season.

“Suzuki’s team is a family for me and now that we’ve won back-to-back titles I’m looking forward to going for a third together in 2015,” Moss commented. “I’m really happy to remain with the team I’ve won multiple championships with in my career and I’m excited to race the updated 2015 model RM-Z450.

“This year I feel like we learnt a lot as a team defending the championship, so now it’s time to move forward together and it’s an exciting time for all of us. I know that the 2015 Suzuki RM-Z450 will be exactly the bike I need to continue this winning trend and I’m definitely up for the challenge.”

Moss is currently preparing to represent Team Australia in the 2014 Motocross of Nations at Kegums in Latvia on 27-28 September, before returning home to Australia to commence his supercross title defence at Bathurst’s opening round on 10 October.

Team manager Jay Foreman is excited to welcome Moss back into the team for 2015, continuing one of the sport’s most successful partnerships.

“To secure Matt within the team for 2015 is great news for everybody involved,” Foreman stated. “We will move forward together and the 2015 model RM-Z450 is another real improvement on our race package, so it will be full steam ahead into the new year. The challenge of racing for a third-straight outdoor championship is a welcome one.

“With Matt signed now we can work toward next year as a team, but before then we are of course really looking forward to having him represent Australia at the Motocross of Nations and then defending the number one plate in the 2014 supercross series.”