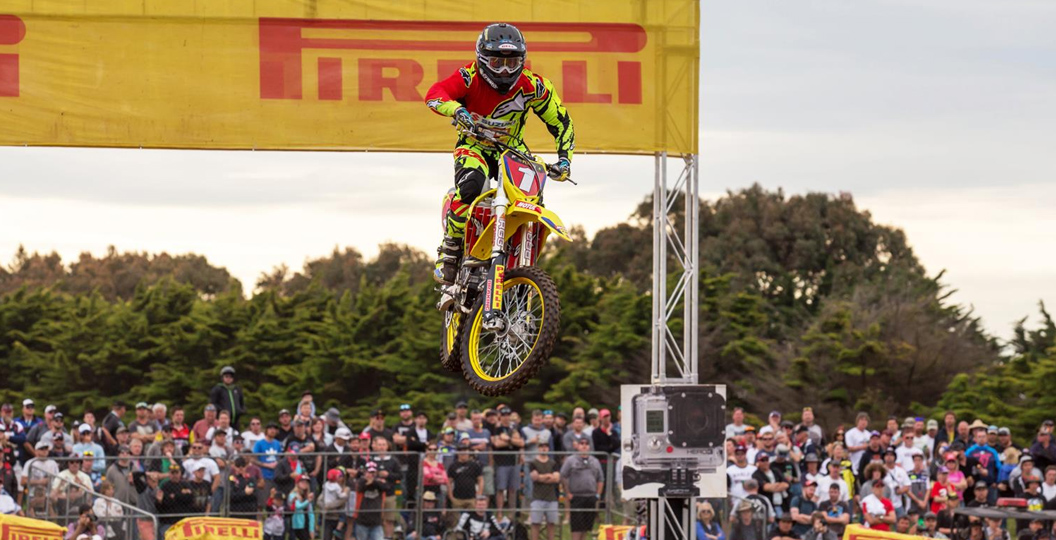 Contested alongside the Australian Motorcycle Grand Prix, Moss and Bopping dominated their respective heat races and claimed a stunning 1-2 Main Event result on Saturday during round three, riding the new 2015 Suzuki RM-Z450.

Sunday’s fourth round was more challenging for Team Motul Suzuki although Moss was able to rise for his fourth consecutive victory, while Bopping recovered from a first-turn fall to finish a hard-fought fourth, which tied him for second in the series behind Moss.

Said Moss: “It was great to win both Main Events after overcoming some dramas in the Sunday heats, but I’m just happy with the way we are going at the moment. When you have the mind-set of wanting to finish on the podium, it seems to make winning come easier for me. That’s what I did – I just found myself in front and led from there.

“Team Motul Suzuki had a great result on Saturday with ‘Boppo’ and I in 1-2, so it’s really positive to deliver for the team and all of our sponsors on the 2015 model RM-Z450. It’s been a great series for all of us so far and I can’t wait for the indoor event at Brisbane.”

Bopping was also thrilled to stand on the podium again during the weekend, called into the team alongside Moss for the Supercross series after sitting-out much of this year’s racing season.

“The weekend was good for us and another step in the right direction,” said Bopping. “Saturday was awesome, I won both my heats and finished second to Matt in the final, so it was a perfect day for Team Motul Suzuki.

“Sunday wasn’t quite as good for me. I finished second in heat one and won my second heat, which qualified me first, but then in the final I was involved in a first turn pile-up and had to work my way back to fourth by the finish of the race.

“I was happy with how I rode though – the 2015 RM-Z450 was great all weekend and now we are tied second in the series – so it will be a tight finish at Brisbane’s final round next month. I just have to keep pushing and the results should come.”

Entering the final round at Brisbane Entertainment Centre on November 8th, defending champion Moss carries a 22-point advantage due to his perfect season to date, with Bopping tied for second after a consistent effort across the season.