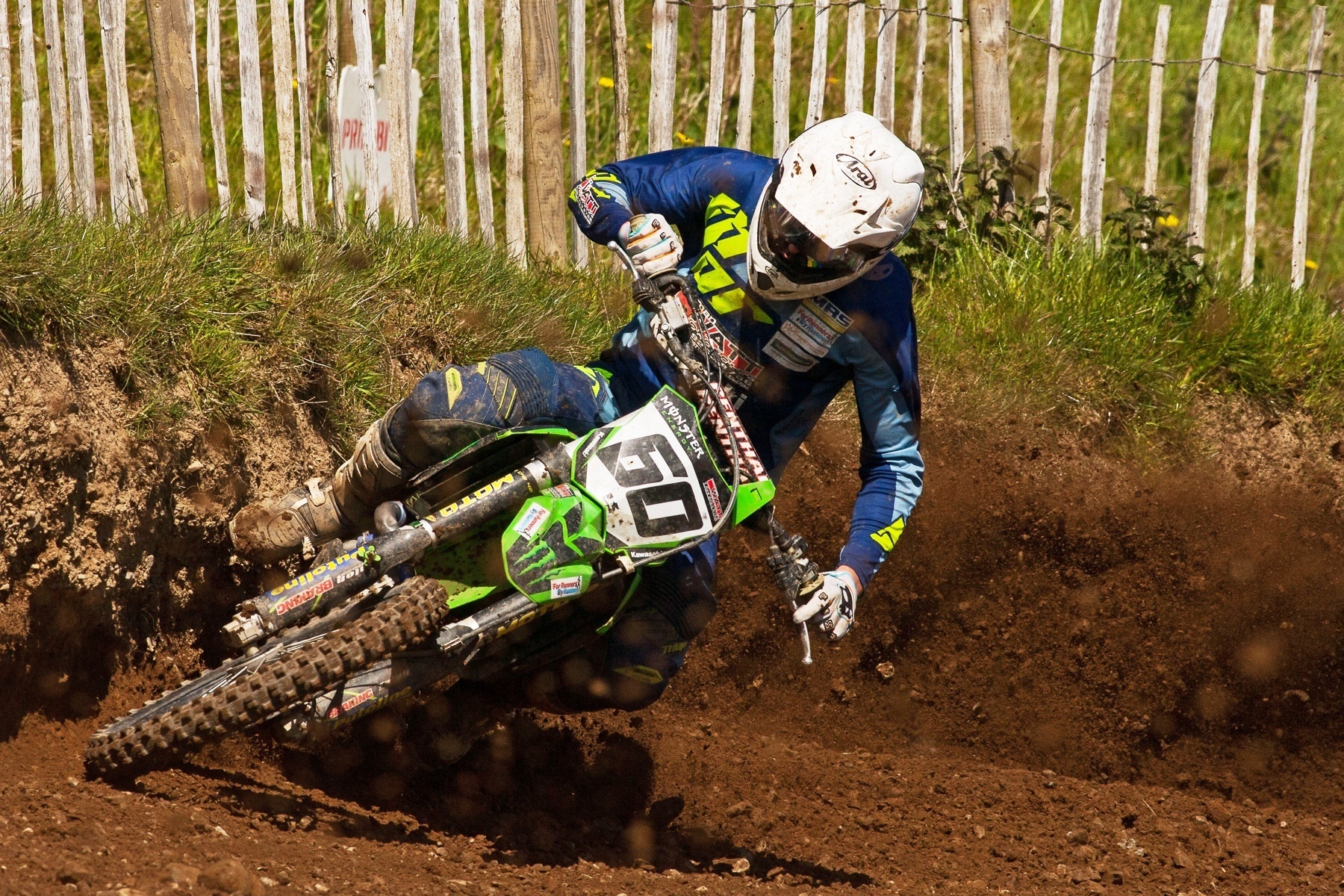 Tandragee Motocross Park welcomed the riders for round 3 of the Ulster Motocross Championships on a perfect day for motocross, the track well watered and looking inviting, a good crowd, including interested spectator British Championship front runner Martin Barr were looking forward to an exciting days racing

In the Norman Watt Motorcycles Premier MX1 Class, Championship leader John Meara stamped his authority on the 2016 Championship with an impressive overall on the day with two wins and a third.

Race 1 saw Loughbrickland 22 year old Meara jump into the lead on his Watt Kawasaki and was never threatened, although Lisburn’s Irish Champion Richard Bird hauled in him on the last lap on the Watt/Five5 Motorsport 350 KTM, Meara had the situation well under control.  Third was Comber multi Champion Wayne Garrett on his 350 GMP/Spratt Electrical/CCR/Watt KTM, fourth was Banbridge man Ryan Adair on the Adair Building Services 350 KTM, with HTM Husqvarna mounted Newtownards man Jordan Scott fifth. Reiging Champion Robert Hamilton was disqualified for receiving outside assistance to his Risk Racing GOMX Yamaha 450, much to the Portavogie mans annoyance.

Race 2 was yet another Meara benefit, once again chased down by Bird and Garrett, with Scott and Adair swapping places.

Race 3 started well again for Meara leading for nearly a lap before a puncture just after half distance allowed Bird onto the lead, followed by Garrett, who soon passed his Lisburn rival to take a well earned and popular win, after the race Garrett commented that he had been having gearing issues in the first two races, finding himself ‘between gears’ on the big uphill jumps, the change left the Comber man more confident, although he admitted the Meara had the win but for the flat back wheel.  Meara held on to third followed by Hamilton, Adair and Scott, another rear wheel puncture victim.

In the nutttravel.com Premier MX2 Class, Jason Meara started as clear favourite for the Class win on his Motul Oil/Watt KTM, however, in race 1, big brother John led away on his watt Kawasaki 250 closely followed by pole sitter Ryan Adair and Bird,  Bird slipped past Adair, but Jason Meara was charging through the pack from an average start and soon assumed second place but big brother John was too far ahead to be caught, third was Dubliner Jordan Keogh on his Kawasaki, fourth was Adair, fifth another Southern visitor in KTM mounted Jake Sheridan, and sixth Bird

Race 2 and Richard Bird came out on top from a squabbling Jason Meara on the Motul Oils Watt KTM, and Belfast teenager  James Mackrel struggling with a hand injury on the Risk Racing GOMX Yamaha, fourth was another Yamaha with Sean Devlin aboard, the Banbridge man enjoying his return to the sport after three years away, fifth was Keogh, sixth Ballymoney man Jordan McCaw on the HTM Husqvarna machine. John Meara and Ryan Adair crashed at the second corner, with Adair subsequently excluded for receiving outside assistance, Meara, learning from others, chased away over enthusiastic spectators who rushed to his aid, thereby salvaging 13 points.

The Precise Protect Insurance/Matheson Project Semi Expert MX1 Class produced another overall win for was Newtownabbey man Paul Atkinson on his HTM Off Road/Ulster Shredders Husqvarna 350 despite not winning a race, while Chris Orr from Downpatrick finished second overall on his Yamaha, again without a win.  Double winner Lindsay Newell from Ardglass won two races on his return to racing five years after breaking his leg in two places at this track, a tangle with backmarkers ruining his scorecard on the big Suzuki, but he finished third overall, fourth was Moira man Jordan Blakely on the JB Electrics KTM, fifth was third race winner Ryan Esler from Ballymena on the dayglo yellow KTM, sixth was Ronan Potterton, David Martin had a bad day at the office, a broken chain giving him a dnf to go with his two thirds, but he should maintain third in the Championship behind Atkinson and Esler.

The Precise Protect Insurance/Matheson Project Semi Expert MX2 had young Donegal rider Aaron Gardiner take his first ever overall win on his Honda aith two wins and a second, second overall was popular Ballyclare man Kris Rea on his Yamaha, third was English visitor Mitchell Meadows on his KTM, he and his brother enjoying the day at Tandragee after the Club sorted out some start permission from the ACU to allow them to ride. Fourth was Championship leader Karl Thompson on his Risk Racing GOMX Yamaha, fifth was Rhys Graham on his KTM, and sixth was Magherafelt teenager Jake Hall on his Husqvarna.

Russell’s Motorcycles Clubman MX1 had the nostalgic sight and sound of a two stroke winning the overall with Ciaran Boyle brapping his Yamaha to three wins, veteran road racer Denver Robb from Dungannon took his 350 KTM to runner up, followed by similarly mounted Comber man Stephen ‘stig’Gabbey, fourth was championship leader Jordan Allingham, the Greysteel man having Honda troubles in race win, forcing him to ride a Kawasaki in the final two races, losing his lead to Boyle.  Fifth was Lurgan local Graeme Girvan on his KTM, with Josh Rea sixth on his Honda

An exciting days racing in all classes, with only a small dust issue towards the end of the day, champagne spraying, plates awarded, and everyone back at Tandragee for the next round on 30th July.