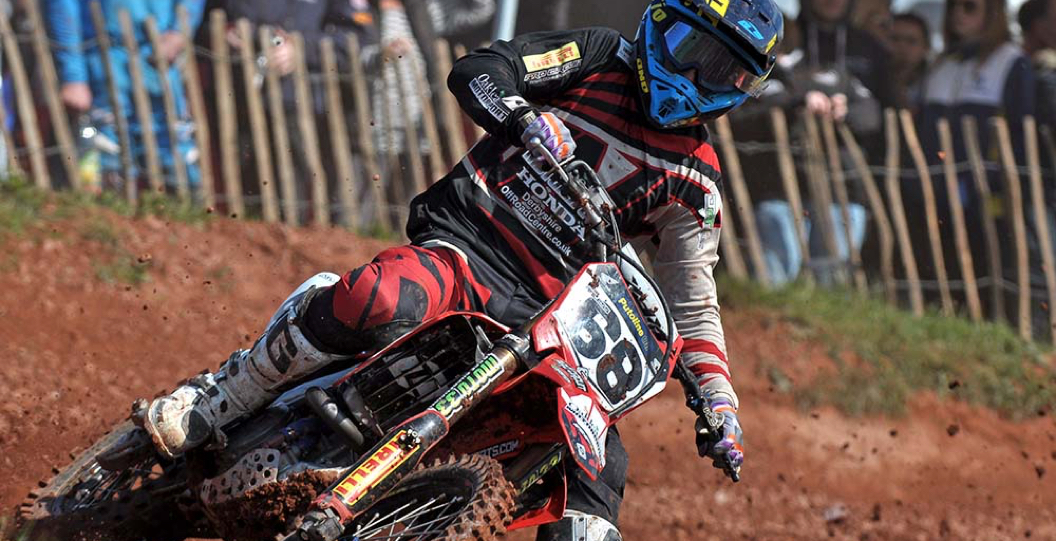 Round 3 of the Phoenix Tools South West premier got under way at Crediton last weekend.  With a solid first round performance Shane was looking to gain as many points as possible on series leader Alfie Smith.

Qualifying in 8th Shane was looking to make good starts and get out front early.  Race one was Shane do exactly that, taking the holeshot from series leader Alfie Smith. A couple laps in Smith found a way past but Shane was still there on his back wheel.  The second to last lap saw Shane pass back Alfie Smith and take the lead and the race one win by a comfortable eight seconds.

Second around the first corner in moto two Shane was hot on the heels of Dan Thornhill. After four laps of battle with the Yamaha mounted rider Thornhill, Shane passed him for the lead and began to open up a small gap and take the race two win, making it two for two

With two wins already in the bag and looking dominant out on track Shane was looking to make it three from three.  Another good start saw Shane sitting in second behind Sunny Thompson.  Sunny opened up what seemed to be a comfortable lead, but Shane was soon to turn this all around. At the halfway mark Shane was right on Thompson and made the pass for the lead.  At the chequers Shane took the win and with three wins out of three he took the overall and the Championship lead.

“I was looking forward to today and this round, I had to make some points up in the championship. Qualification took me a while to get into the track, I managed to get a lap in but it wasn’t great I managed to get eighth. First race I took the holeshot, I pushed hard for a couple laps but got passed by Alfie Smith and followed Alfie for most of the race and just watched the clock, I knew I was faster and passed him and took the win.  Second race I had another good start and followed Dan Thornhill for half of the race, passed him and took the moto win. I had another good race in race three, the track was real rough and dusty, Sunny Thompson was leading, I kept pushing and he got tired and I passed him and took another win.  Three wins on the day, that’s what I was looking for. It’s good for the championship and good for the team.  I just want to say thank you to the team and thank you to Bailo, it’s about my results paid off.” –  Shane Carless

“We set out to get some consistent races in and knowing we were only a few points behind the series leader. With Shane bringing home three wins, today was a perfect day we look to take this into the next round. Everyone is buzzing again Shane’s had a few unlucky moments so far this season adapting to the new set , but the bike is now working really well and things are on the up, we are all really enjoying our racing again. Big thanks to Derbyshire Off Road Centre, Dave Thorpe and all our sponsors once again. Now we have a busy week ahead, preparing Gradie Featherstone for the MX2 GP in Valkenswaard.”  – Shaun Anthony – Team Manager