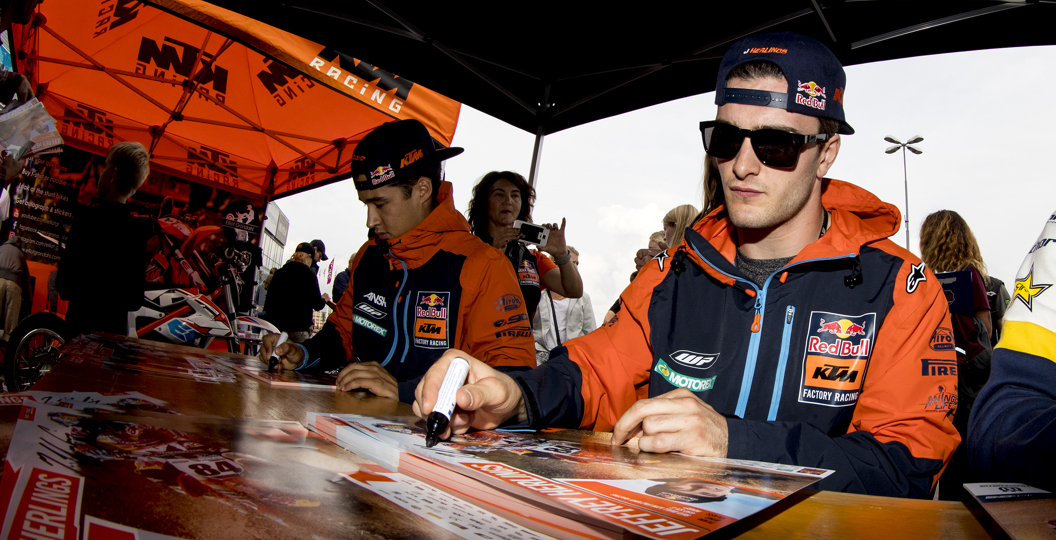 The news came in late Wednesday over here that Jeffrey Herlings is racing this weekend’s Indiana National and, if things weren’t interesting enough, this should spice it up!

Herlings, as we all know, is a world-class rider and has been having a nice rookie MXGP season after a slow start due to injuries. I’m not sure if he’s doing as well as we thought he would a couple of years ago when he was more than ready to move up, but injuries in the MX2 class have halted some momentum he had from back in those days. Still, he is a race-winning threat almost every time he lines up but, watching him live and from over here, I would’ve sworn the MX2 top-of-his-game Herlings would walk away with the MXGP class.

However, if you take away the early season struggles of Herlings to when the MXGP series got back to Europe (Pietramurata) the points look like Antonio Cairoli (495) and Herlings (471). If ifs and buts were candy and nuts though, right?

Now Herlings is lining up against the best 450MX riders over here this weekend and it’ll be interesting to see what he says and how he does. Win or lose, he has to be admired for the extra work he is putting in. Too many times in 2017 we have seen riders over here in America stick to the thirty-race American schedule and not one more, no matter how much the fans want it or how much money the European promoters wave at them.

Herlings is headed inside the lion’s den of motocross where he has got all the variables against him; the time-zone change from flying here, a different bike than he is used to (in MXGP he runs a different frame than a production bike that is not allowed here. Teams in America must use a production frame, swing-arm and crankcases) and the short amount of practice that the riders get here to learn the track. The track is softer terrain though, which agrees with the Dutchman.

How will he do? Well, Eli Tomac just has to get inside the top ten each moto to clinch his first 450MX title and, from what we have been seeing lately, I’d look for him to take it easy. Since he has not gotten one holeshot all year long, I don’t think he’ll be doing some amazing charge from the back to try and kill himself to get out front. That is good for Herlings. Blake Baggett is not riding much during the week due to an injured thumb and hasn’t been himself for a while. ‘4’ has been good, but not great. That is also good for Herlings.

Marvin Musquin has absolutely been on fire lately and needs to make up a bunch of points on Tomac. In case you missed it, he is going to be Herlings’ teammate for this race. We have seen KTM and Husqvarna pull a lot of team tactics in supercross, so one would think they would do it at this race to help out Marv right? Maybe Jeffrey is under orders to not beat Musquin unless Marv’s far back of him. This is not so good for Herlings (although it is just a theory). I have to think Herlings is very capable of beating everyone not named Eli, Blake or Marvin if he gets the start he needs and doesn’t fall. The other three guys all have something different going on in their races, as explained previously.

With all of the above factored in, I’ll go out on the limb and predict a poor start and/or crash in first moto and that he gets a fourth. In the second moto he either leads and lets Musquin by or he just doesn’t pass Musquin and takes a second. So, 4-2 on the day is my prediction and smiles all around for doing this. Nice job, Jeffrey.